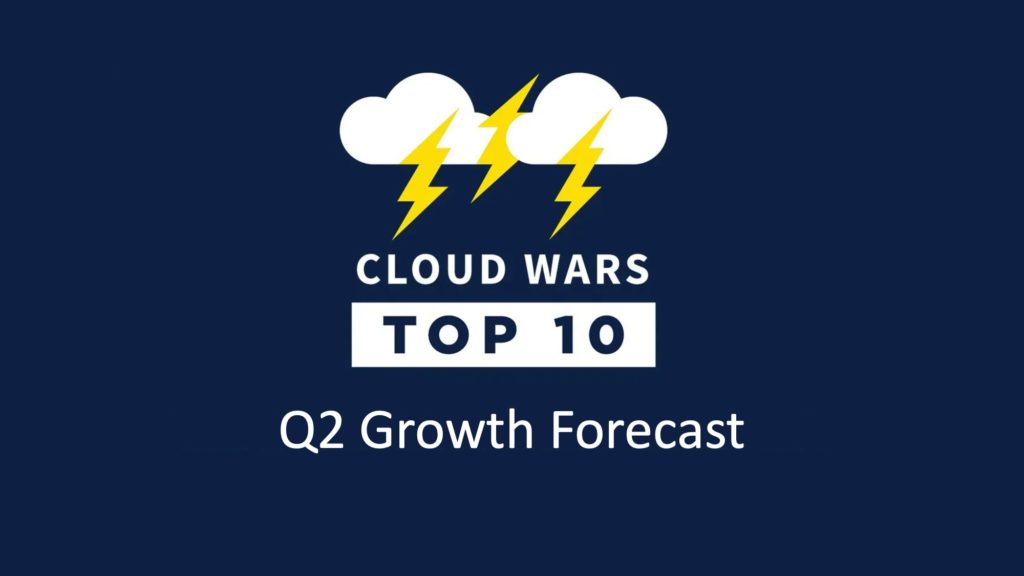 As Q2 earnings season opens, I’ve become a tad more conservative on my growth estimates for the six Cloud Wars Top 10 companies whose numbers will come out in the next two weeks.

So yes, it appears that the combination of incessant hand-wringing about a recession, runaway inflation, war in Ukraine, the super-strong dollar, and the accompanying unease accruing from all those factors is likely to trim the remarkable growth rates posted over the past few years by the world’s largest and most-influential cloud providers.

Let’s take a quick look at my Q2 projections for how those growth rates will come out, and then I’ll offer a few follow-up comments on each of the six companies.

Now, while these projected growth rates are all slightly down from recent quarters except for IBM — and I’m not trying to dodge that likely reality — take another look at those numbers in the middle column and tell me what industry on Earth would not sell its very soul for growth rates even half as lofty as these.

So, yes: Despite previous assertions from Cloud Wars Top 10 CEOs about seeing no slackening in demand, the external pressures facing businesses in every industry are demonstrating that even the cloud business — described by many of those CEOs as the antidote to inflationary pressures and other business problems — is not immune to the encroaching slowdown.

ServiceNow CEO Bill McDermott shared his concerns about the global situation during a recent CNBC interview with Mad Money’s Jim Cramer. While McDermott scrupulously avoided any mention of or allusion to ServiceNow’s imminent results, the market took McDermott’s comments to mean that he was signaling a softening in demand for enterprise cloud products and services.

Other mitigating factors could arise: For Microsoft, the #1 company on the Cloud Wars Top 10, June 30 marked the close of its fiscal Q4, and Microsoft generally delivers some very impressive results in closing its fiscal year. So perhaps that’s one example where growth won’t slip.

AWS has been performing brilliantly in the past 14 months under new CEO Adam Selipsky and perhaps that momentum will enable it to refuse to participate.

Here’s the schedule for when each company’s earnings will drop: