With #1 Microsoft and #2 Amazon likely to generate $20 billion in cloud revenue for the 3 months ended Sept. 30, the Cloud Wars Top 10 vendors should combine for more than $40 billion for that quarter.

We’ll get the exact details for several companies later this month as earnings releases come out for Microsoft, Amazon, SAP, Google, IBM and ServiceNow. The numbers offered below are my projections—not official results. 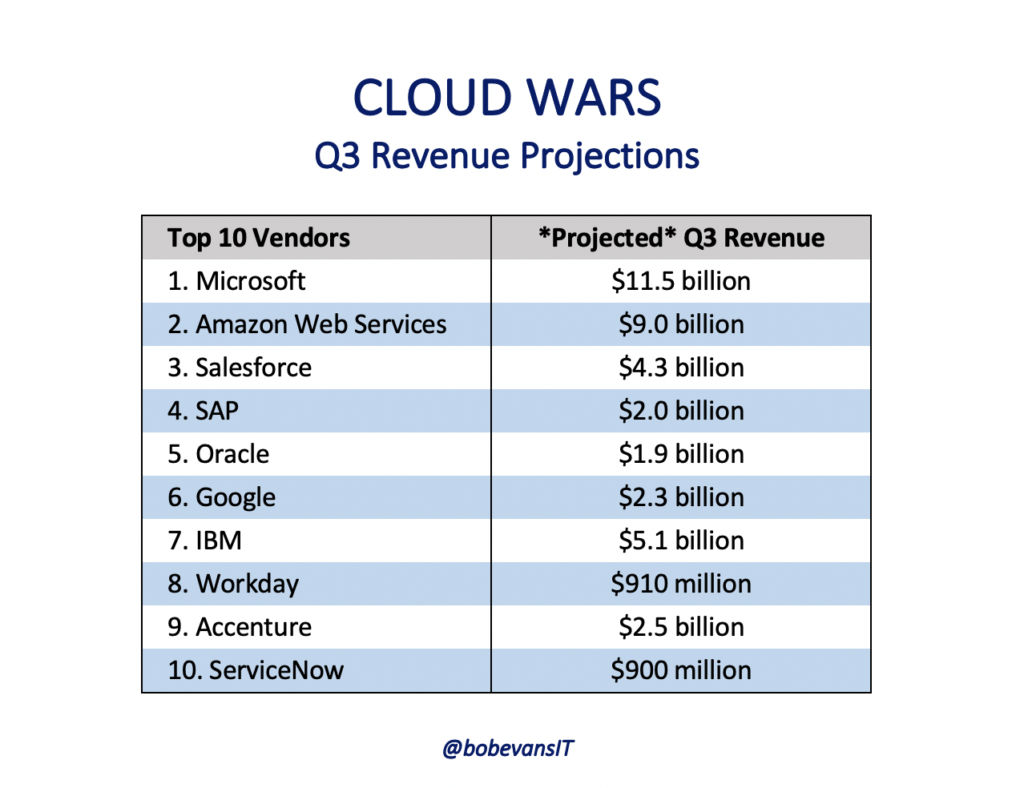 Microsoft is setting the pace after posting a stunning $11 billion in commercial-cloud revenue for the 3 months ended June 30 (its fourth fiscal quarter). After that earnings announcement, CEO Satya Nadella said the company has a “line of sight to many more” massive deals in the range of $500 million to more than $1 billion. (For more on that, please see Inside Microsoft’s Billion-Dollar Cloud Deals: Driving ‘Innovation Agendas’.)

Most of the Top 10 are growing their cloud revenue by at least 25% year over year. A few have been coming in above 40%, including Microsoft and SAP.

Google Cloud is a bit of a wild card, with parent company Alphabet breaking out few details for the 3 months ending June 30. All Alphabet has shared is that Google Cloud revenue exceeded $2 billion. Based on that and the considerable momentum new CEO Thomas Kurian is generating, I’m guessing Google Cloud revenue for Q3 will come in at $2.3 billion. Perhaps Alphabet will continue to offer some detail when it releases its results later this month.

Taken as a whole, the $40.5 billion I’m projecting for the Cloud Wars Top 10 reflects the enormous move by big companies to the cloud as the foundation for their digital transformations.

And within those leading vendors, we’re seeing every company expanding its range of cloud services and solutions to take advantage of the booming market.

Salesforce is pushing more deeply into the platform space while also pushing back hard against SAP’s incursions into CRM. (Read more on this fiery competition in Salesforce Invades SAP: Links Sales + ERP Data for Manufacturing.)

Disclosure: At the time of this writing, Microsoft, SAP, Oracle, Google, IBM, and Workday were clients of Evans Strategic Communications LLC and/or Cloud Wars Media LLC.