Despite Amazon’s ongoing outstanding cloud-computing performance last quarter with revenue up 49% to $6.1 billion, that just wasn’t good enough to keep pace with cloud leader Microsoft whose commercial-cloud revenue surged 53% to $6.9 billion and gave it an $800-million spread for the quarter over Amazon in the closely watched race for supremacy in the cloud.

Now, it’s entirely possible—and probably even quite likely—that you’ve been reading and hearing that Amazon is the undisputed leader in cloud computing. And those reports—whether uninformed, misinformed, misguided or incomplete—are simply wrong. Here’s what’s right:

Microsoft is the world’s leading enterprise-cloud vendor, not Amazon. 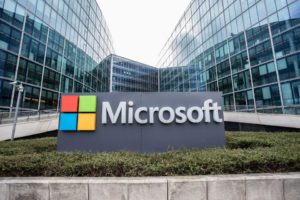 And to prove conclusively that Microsoft’s #1 and Amazon is #2 in the cloud here are some cold, hard facts in the form of official enterprise-cloud revenue figures for Microsoft and Amazon for the last 5 quarters:

So not only has Microsoft’s enterprise-cloud revenue been larger than Amazon’s for each of the past 5 quarters, but also the magnitude of Microsoft’s cloud-revenue lead over Amazon has been growing across those 15 months, leading to the $800-million gap opened up by Microsoft last quarter.

These numbers are taken directly from the quarterly financial statements published by each company—they are not estimates, projections or guesses. These are facts, and they represent the full range of cloud-computing revenue each company generates from its complete array of cloud services.

Are those arrays of cloud services the same for each company? Definitely not—but that’s true for any two cloud companies. Or for that matter, for any two tech companies, or any two car companies or banks or pharmaceutical companies.

Amazon chooses to compete in the IaaS and PaaS layers of the cloud, but not in SaaS.

Some people have tried to say because the cloud services offered by the two companies are not precisely the same, that their cloud revenues cannot be compared—and that is nonsense. Both companies are in the enterprise-cloud space; both are free to pick and choose which slices of the enterprise cloud to compete in.

And from there, it is up to the business customers of the world –not some self-appointed Silicon Valley guardians of cloud-definition purity—to determine which of those two outstanding cloud vendors will get their lion’s share of the business.

And if you look at it from the POV of business customers, Microsoft is the clear and unambiguous leader—it is beyond question.

So how, then, do we explain this sentence published about two weeks ago in the Wall Street Journal in an article about Microsoft’s blowout fiscal fourth-quarter performance: “Microsoft remains a distant No. 2 in the cloud business behind Amazon.com Inc., but has established itself as a viable option for companies beginning the transition.” –The Wall Street Journal, July 19, article by Jay Greene. Incredible—it’s gotta be the first time in history that a company generating $800 million more revenue than its closest competitor in a single quarter has been billed “a distant No. 2”!

Or this remarkably similar headline from a CNBC article 3 months ago just after Microsoft had posted quarterly cloud revenue of $6.0 billion compared to Amazon’s $5.4 billion: “Microsoft narrows Amazon’s lead in cloud, but the gap remains large” –CNBC headline on April 27 article by Jordan Novet. Yes, at more than $500 million, “the gap remains large”—but how in the world could CNBC conclude that the company with the smaller number is the leader?

Since those two conclusions are pure fiction, I can only speculate—but my guess is that both reporters and both media properties are conflating the segment of the cloud in which Amazon is the clear leader—public-cloud infrastructure—with the entire cloud-computing business. There’s simply no other even remotely plausible explanation for the totally counterfactual conclusions they draw: they’re inaccurately—and inexplicably—saying that the public-cloud IaaS segment is equivalent to the entire cloud-computing business.

Using the logic employed in those two articles, then Salesforce.com is not a cloud company—in spite of having a market cap that’s just surged past $100 billion, and $3 billion in quarterly revenue, and a CEO (Marc Benioff) who in the 19 years since he founded Salesforce has done more to evangelize cloud computing than any CEO in the tech industry.

That is, of course, preposterous. But that’s what those articles would have you believe.

This stuff matters because the cloud is the technological underpinning for one of the most-powerful upheavals in the history of global business: the sweeping move by businesses in every industry and every region of the world to undergo digital transformations in order to survive in our increasingly digital world.

In times of upheaval and profound change, leaders step forward to show the way. And as great as Amazon’s cloud performance has been and continues to be, Amazon and its AWS unit are not the leader in the enterprise cloud, regardless of how many times that fiction is repeated.

The world leader in the enterprise cloud is Microsoft—and the facts prove it.