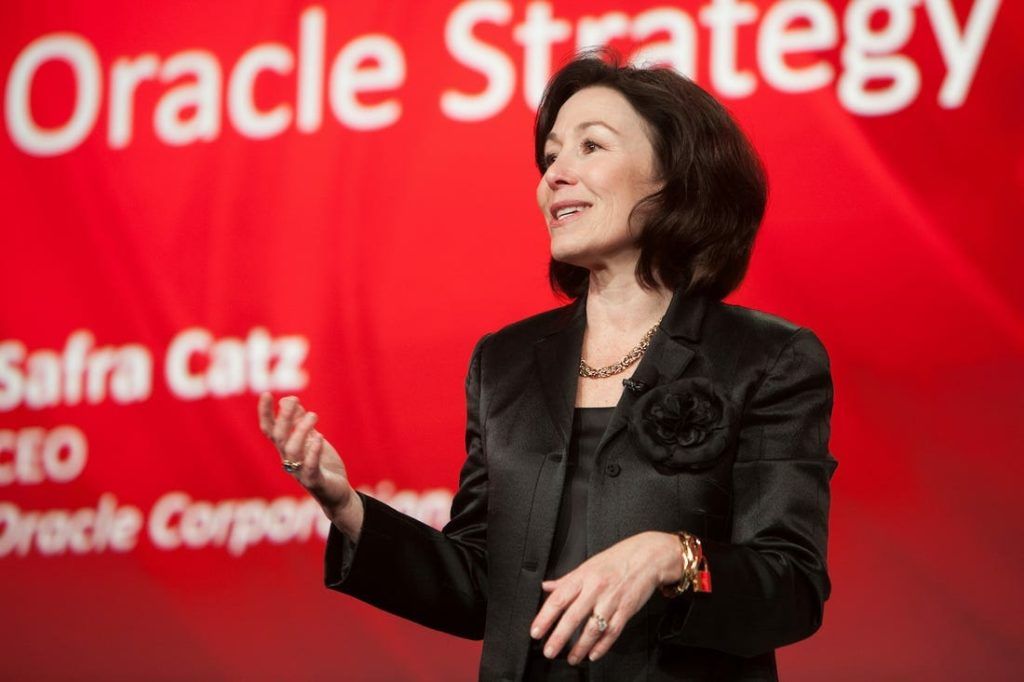 After several quarters of simply talking about how Oracle will someday become a player in the massive IaaS business, Larry Ellison yesterday offered an extensive list of customer wins that will surely have grabbed the attention of Amazon and Microsoft.

On top of that, Ellison and Oracle CEO Safra Catz also used yesterday’s fiscal-Q4 earnings call to highlight their huge momentum in HCM, soaring revenue growth for Autonomous Database and the possibility that their cloud business could be growing at about 30%.

Bear in mind The Law of the Cloud: get as big as you can as fast as you can in as many layers of the cloud as you can. For Oracle, while its SaaS business has become quite significant, the company had little or nothing to offer in IaaS and only fragmented pieces in PaaS.

That’s all begun to change—dramatically—with its Gen2 OCI (Oracle Cloud Infrastructure) and Autonomous Database. And in yesterday’s call, Oracle for the first time released a bit of detail about the revenue growth—and potential—for those two cornerstone cloud products.

“We’re thrilled that once companies see our differentiated OCI technology, they become believers,” Catz said on the call.

“This is evidenced by the fact that annualized consumption revenue for Gen 2 OCI grew over 140% in Q4. By the way, the ACR for Autonomous Database grew nearly 70% in Q4.”

For Oracle, this broad-based growth across all three layers of the cloud—SaaS, PaaS and IaaS—means that as customers engage with Oracle for any one of those three segments, Oracle has an ideal opportunity to show how its other cloud offerings can drive additional business value.

In that way, Oracle’s fast-growing Fusion SaaS apps become one of the top sales tools for its OCI and Autonomous Database, and vice-versa.

That’s exactly what Microsoft has done in addressing all facets of what CEO Satya Nadell calls the “digital estates” of customers: not just low-priced IaaS but also platform services from integration to databases, and SaaS applications to support modern digital business processes.

So, from yesterday’s call, here are 10 reasons why Oracle leaders Ellison and Catz are so bullish—and have the evidence to back up that talk—about the Oracle cloud.

1. Oracle has a massive installed base of on-premises customers who are beginning to become true believers in Oracle’s ability to deliver a full range of world-class cloud capabilities.

During the Q&A session, Ellison made a blunt and rather startling admission: “Not everyone believes—in fact, most people don’t believe that Oracle has the fastest cloud and the lowest-cost cloud. But when you come here and try it, that’s exactly what you find out. And you’re just seeing the beginning of that happening and I think a bunch of people were shocked that Zoom picked Oracle. I think Zoom was shocked also.

“I think Zoom was shocked when they looked at the results after they moved their application to Oracle and we were faster, much faster and we were much less expensive. And we were more secure. So we think as people compare our cloud, our infrastructure, our second-generation infrastructure to AWS and Azure and the rest, they’re going to pick our cloud.”

2. Ellison believes the string of customer wins will convince other customers to give Oracle a shot—“Once they look, we win.”

“And I think as far as our end-users are concerned, Verizon is a perfect example of someone who tried out [those other] clouds and then tried Oracle, and found that Oracle could do a lot more for a lot less money than they could get done with AWS or Azure. We have a lot of customers and we’ve got to get them in, we’ve got to get them looking, we’ve got to get them trying our cloud and comparing that to the results of AWS. And we think we’re going to get the lion’s share of our database installed base moving to our cloud.

“If I’m right, if that’s right, then our infrastructure cloud business will be gigantic. We have hundreds of thousands of database customers including all the largest companies and governments on the planet Earth.”

3. The promise of autonomous—and today, only Oracle has it.

“Autonomous self-driving computer systems eliminate human labor and thus eliminate human error. There is nothing for humans to learn and nothing for humans to do. Eliminating human labor dramatically lowers the cost of running an autonomous system. Eliminating human error dramatically increases data security and system reliability. All of the big data losses at Amazon were caused by human error. There is no opportunity for any human error if your data is stored in an Oracle autonomous system. This is a very big deal.”

4. For the past several years, Oracle raced to convert its on-premises technology to the cloud. Now, it’s begun retrofitting some of its strategic cloud products for the on-premises world.

“And we make it very attractive for them to get access to latest technology. There is no upfront capital cost to get this thing. It’s just like buying public cloud, except we put the database cloud, the Cloud at Customer, in your data center in the form of a number of Exadata machines. And then we manage it for you across the network. Again, what’s happened is for years, our installed base of on-premises customers had no access to our latest and best database technology: Autonomous Database. Now all of a sudden, they do. We think this is going to be a gigantic shift and a great product for us.”

5. Oracle’s high-growth cloud products are overcoming the drag from its low-growth or declining products.

In outlining a few growth drivers for the company, Catz cited the large and growing demand for Oracle’s SaaS apps.

“I believe our SaaS business momentum will increase as our very large installed base of application customers continue to move to the cloud,” she said, “and as we take share from our on-premise competitors, SAP for one, that do not have a true SaaS offering. Our products are modern, secure, performant, mobile, and importantly, highly referenceable. As more of these ERP workloads move to the cloud, we believe that they will move to Oracle Fusion.”

“We have four decades worth of Oracle database installations, which have only recently started to move to the cloud,” Catz said.

“These databases contain the most mission-critical and valuable information of our customers. Now with Autonomous Database, they have a place to go where they get far better technology at a lower price. For those who care about security, performance, and cost, the Autonomous Database will be the standard that everyone else is measured against. The Autonomous Database runs on Oracle Cloud infrastructure in our Gen2 public cloud, and can also run in the customer’s own data center with [email protected] The Autonomous Database is without question our most significant database release and will absolutely drive revenue acceleration going forward as it grows.”

“Whether it was supporting systems for federal loan programs with partners or helping states get unemployment checks out or supporting the national Red Cross systems around the world handle the massive volume spikes or helping HHS, the CDC and other health authorities around the world or supporting over 100 clinical trials that were hurriedly stood out, we were there to help our customers and I think we are much closer to them as a result.

“There are many, many, many more stories like this and they all underscore how proud I am of our employees and customers as we are all actively engaged in the ongoing fight against COVID-19.”

9. The COVID crisis caused some companies to reassess their cloud strategies—and opened the door for Oracle to be considered, Catz said.

“And while some customers have deferred projects, we’re also rapidly building new pipeline with customers that are moving their on-premise workloads to the cloud,” said Catz.

“COVID-19 created challenges that forced companies to reconsider how they work in the cloud, including looking to us as an alternative to AWS and Azure. As we engaged with these customers they found OCI was more performant than our competitors, more secure, less expensive and easy to use, making OCI now a serious part of the infrastructure discussions. We are also seeing this on the application side of the business as many customers entered the pandemic unprepared and are now showing renewed interest in modern cloud applications with mobility, social and machine learning built in.”

10. Pre-COVID, Oracle’s pipeline was “enormous”—and those opportunities are once more coming to the surface.

“We entered Q4 with an enormous pipeline of transactional business. As the quarter progressed, we saw a drop-off in deals, especially in the industries most affected by the pandemic. As countries begin reopening their economies, many of these discussions have already resumed. Since these were not losses to competitors, we believe that most of this business will ultimately be booked.”