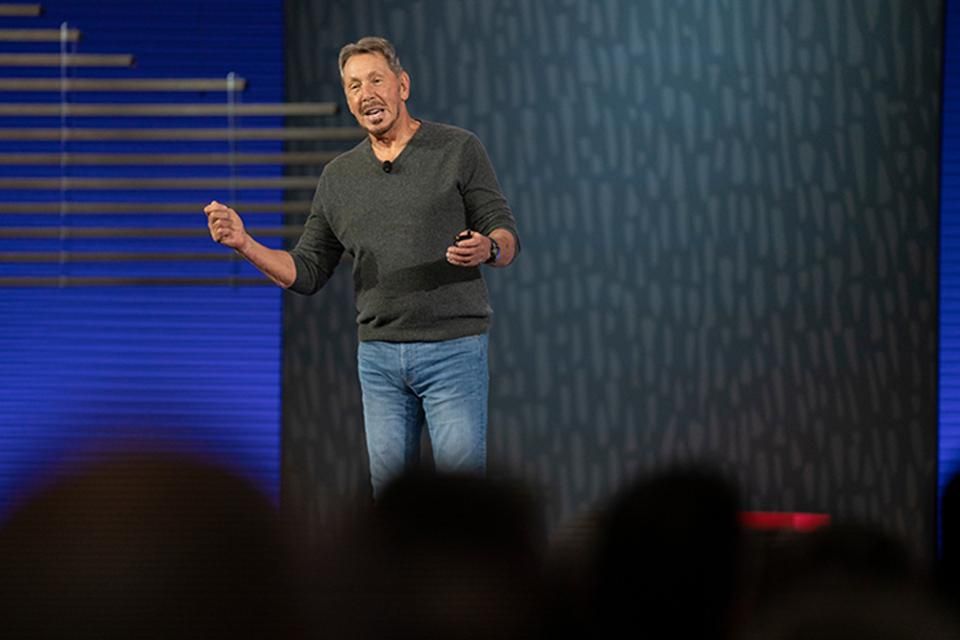 Linux is taking on a higher-profile role in the enterprise-cloud market. Following revitalized strategies from IBM Red Hat and  SUSE, Oracle chairman Larry Ellison figured it was high time to explain just how wonderful his own new version of Linux is.

In that context, Ellison introduced Autonomous Linux. He also offered his perspectives on why this new Oracle version offers unique value to business customers.

I’m sharing some of his thoughts about his new Autonomous Linux because Ellison’s vision of where the cloud is headed is unlike anything the other vendors in the Cloud Wars Top 10 are proposing. And he’s now brought Linux into the equation.

With very limited exceptions, no other major cloud vendors are talking about autonomous or self-improving cloud technologies. As he’s done many times in his storied career, Ellison has chosen very specifically to defy the established marketplace conventions and has instead created a new model with Oracle at the top.

If Ellison’s vision of an autonomous cloud gains favor among business customers, Oracle stands to gain even greater stature and influence in the cloud business. Then again, if customers decide that autonomous cloud is a solution for a problem they don’t have or don’t care about, then Oracle’s in for a rough ride.

So from Ellison’s recent OpenWorld keynote, here are 10 key points about Autonomous Linux.

Ellison wanted everyone to know that Oracle’s Linux roots run very deep. “Our version of Linux, which we have been working on for almost 20 years, believe it or not, is now autonomous,” he said. “The new version of Oracle Linux is autonomous. It is the first, and it is the only autonomous OS in the world. And it’s live.”

Ellison makes the point that since he’s willing to bet the future of his company on Oracle Linux, you should feel confident it will stand up to whatever you need.

3. Downtime guaranteed to be 2 minutes per month or less.

The expertise Oracle has gained with Linux on-premises will transfer over to the cloud-native Autonomous Linux, Ellison said.

“And we support thousands of customers who run our Linux — Oracle Linux on premise in their place. As opposed to running Red Hat, they run our Linux. And availability — it’s down around — kind of guaranteed to be down two minutes a month. It’s a highly available system designed for the cloud.”

4. The advantages of being autonomous.

Ellison listed the self-fixing and self-improving attributes of Oracle Linux. “Like the database, it provisions itself. It scales itself. It tunes itself. It does it all while it’s running.

5. Perhaps most important of all: self-patching.

Ellison harkened back to the “catastrophic” breach suffered a couple of years ago by Equifax. The Oracle founder went on to say that autonomous technology would make such disasters a thing of the past.

So they were patching Apache Struts. And first, they had to find downtime. When can you go do this? When are you going to take these systems down? Actually, they had known about this vulnerability for six months. But they finally got some downtime. They took it down. They patched most of the instances. The majority of the instances of Apache Struts, they patched. But they didn’t — couldn’t find a few. It’s a manual process, couldn’t find a few — disastrous, catastrophic data loss.

But with autonomous technology? Ellison went on: “There are no human errors. There are no omissions. We don’t miss anything. There are no delays. There’s no waiting and scheduling of downtime.”

7. Autonomous Linux handled the Spectre Meltdown in 4 hours with no downtime.

If Ellison’s claim of “nobody else can do that” turns out to be true, Oracle stands to gain a huge competitive advantage.

It patches itself while it’s running. And we patch the entire fleet—millions of cores. In fact, when the Spectre Meltdown bug showed up, we actually had to patch our entire cloud because we use — it’s a bug on Intel chips. We had to patch our entire fleet of processors, of cores, of systems—150 million patches. We applied those patches to our entire cloud in four hours—no downtime, all fixed, kept running, proven, done. Nobody else can do that.

8. For 20 years, Linux has been the ideal complement for the Oracle Database.

“We’ve had a large team of people working on this for a very, very long time because we felt we needed, running underneath the Oracle database, a highly reliable, highly scalable, highly available OS to go with our highly reliable, scalable, available database,” Ellison said. “And we started this before the cloud generation. But now, the cloud generation is here. It is exactly what we need to pair with our database and our other autonomous services.”

10. Salesforce, AWS and IBM are running on Oracle Autonomous Linux.

“It’s interesting to see some of the customers that have chosen to use Oracle Linux in their cloud. And if they’re updated and current, the Oracle Linux that they have in their cloud is the Oracle Autonomous Linux: AWS, Salesforce.com, and IBM SoftLayer,” Ellison said. “Now, in full disclosure, since IBM bought Red Hat for $32 billion, they’re trying to move off of, as much as possible, Oracle Autonomous Linux and onto Red Hat.

“But they still use Oracle Autonomous Linux to this day.”