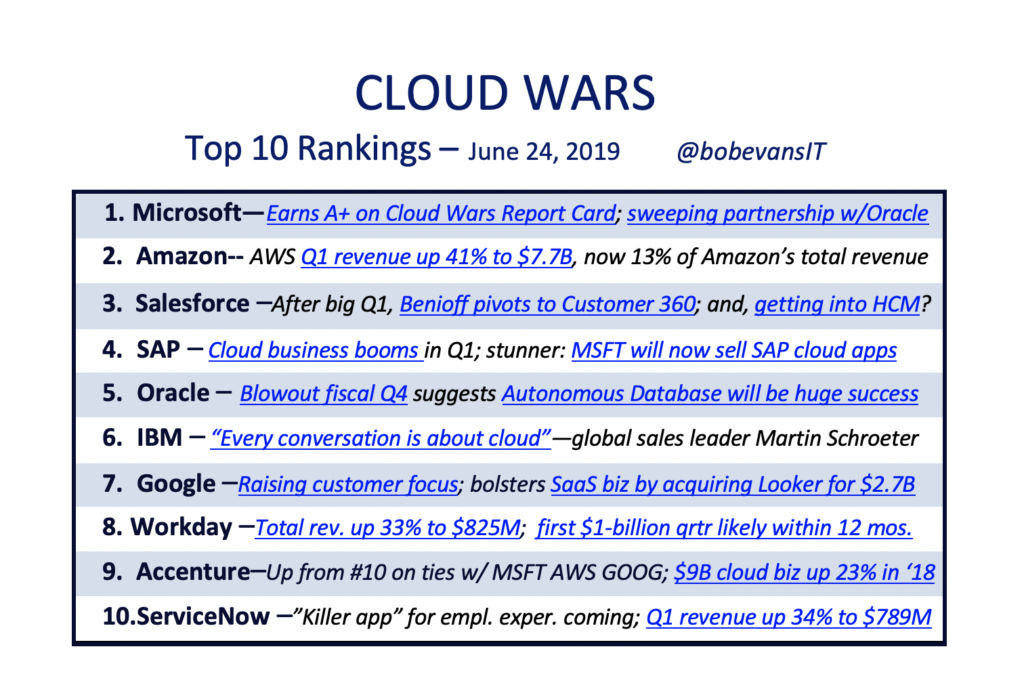 Sparked by impressive quarterly results showing strong customer demand for its Autonomous Database, Oracle has jumped ahead of IBM in the Cloud Wars Top 10 rankings, moving from #6 to #5.

In a more subtle but deeply significant factor, Oracle’s rise in the rankings is also tied to its recent stunning agreement with Microsoft. Their cloud partnership will make it easier for customers to deploy cloud services from both companies.

“After a year of relentless hype about its Autonomous Database, Oracle yesterday said booming demand for the self-driving database was a huge factor behind the company’s blowout numbers for the final quarter of its fiscal year.

In just the 3 months ending May 31, Oracle customers and prospects ran 5,000 trials of the Autonomous Database, founder and chairman Larry Ellison said. And those types of trials are beginning to generate significant revenue.”

(For the full story, please check out Oracle’s Blowout Q4: Autonomous Database Looks Like a Huge Success and also my broader overview, How Oracle Is Becoming a Cloud Powerhouse: Larry Ellison’s All-In Bet on Autonomous Database.)

Since launching the Cloud Wars Top 10 rankings 2-1/2 years ago, I’ve used the list to reflect the degrees to which top cloud vendors orient their services and technologies around the needs of business customers. While cloud revenue is certainly a factor, the rankings are also heavily tilted toward how well a vendor is positioned to meet the emerging challenges of businesses moving into the digital age, versus simply trying to convince customers that “you should buy what I’m selling because it’s what I happen to have.”

For an overview of how each of those top cloud vendors is performing, check out Grading the World’s Top 10 Cloud Vendors: The Cloud Wars Report Card.

Oracle’s broad and deep SaaS business is another factor in Oracle’s move up to #5, but the primary driver is the emergent revenue impact of the Autonomous Database. Because Autonomous Database represents a massive addressable market worth many billions of dollars among the tens thousands of businesses around the world currently running hundreds of instances of the traditional Oracle Database.

Strategic Moves Have Set Oracle Up for Success

And thanks to some typically brilliant strategic thinking by company founder Larry Ellison, Oracle stands to double-dip on all cloud revenue generated by Autonomous Database because that software will only run on Oracle’s “Gen2” cloud infrastructure.

So every customer that selects Autonomous Database will also become a user of Oracle IaaS, a layer of the cloud market in which Oracle’s been only a tiny player so far. But Ellison’s decision to bundle Autonomous Database—the product that could replace many of those hundreds of thousands or even millions of existing databases—with Oracle’s new Gen2 infrastructure could make the company a relatively small but strategically significant force in the cloud-infrastructure market.

And that’s where the tie-in with Microsoft in the cloud comes in. Microsoft’s booming cloud business now has yet another customer-centric capability to offer to businesses: the seamless interoperability of Microsoft’s sprawling cloud services with Oracle’s cloud database services and technologies. (You can read all about that at Microsoft-Oracle Shocker: Customers Win as #1 and #6 Vendors Pair Up.)

For IBM, the slip to #6 is an indicator that while the company’s $20-billion cloud business is growing, it’s simply not growing as rapidly as the other cloud leaders are. Plus, IBM has struggled to articulate a simple and clear cloud strategy, due in large part, I believe, to the fact that the company’s big and deeply entrenched lines of business cannot or will not subordinate their incumbent positioning to a unified and company-wide cloud value proposition and message.

So it was good to see IBM’s head of global sales Martin Schroeter recently say at an investors conference that at least from the customer side of the conversation, the cloud is the dominant topic of conversation: IBM Sales Leader: “Every Discussion Is About Cloud”.

For more on IBM’s cloud business and capabilities, please see the following:

Disclosure: at the time of this writing, Oracle, Microsoft and IBM were clients of Evans Strategic Communications LLC.