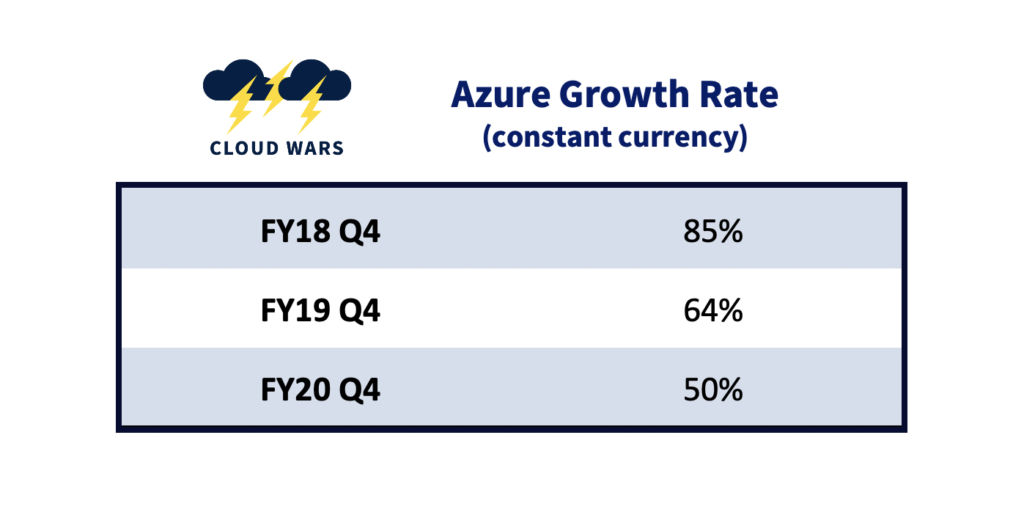 The growth rate for Microsoft Azure has tumbled from 89% nine quarters ago to 50% last quarter.

Should this be a cause for concern for the world’s largest and most-influential enterprise-cloud vendor and its CEO?

Or is it just a natural offshoot of the law of big numbers, in which it is wickedly difficult for a multibillion business to sustain extraordinary growth rates as its revenue base becomes increasingly massive?

Here’s my take: Satya Nadella and the Microsoft executive team are extremely pleased with Azure’s continued hypergrowth and particularly with the megadeals the company is locking down with global companies across a wide range of industries. Let me share a few reasons why I feel this way.

1. Would Nadella like to have seen Azure’s Q4 growth rate be closer to Q3’s 61%? Of course—but 50% growth for Azure in the quarter that will likely show the most-severe impact from COVID-19 is a great accomplishment.

2. While Microsoft’s overall enterprise-cloud business continues to grow rapidly, Azure is growing at a much faster rate.

While Microsoft doesn’t release specific revenue figures for Azure, it does release Azure’s quarterly revenue-growth rates. Microsoft also reports an amalgamated number called “Commercial Cloud Revenue,” which includes not only Azure but also Office 365 Commercial, Dynamics 365, the commercial portion of LinkedIn, and other cloud properties that Microsoft does not specifically identify.

3. The enterprise cloud has become the largest and most-dynamic part of the overall Microsoft empire.

Now accounting for well over one-third of Microsoft’s total revenue of $143 billion, Commercial Cloud revenue for the fiscal year ended June 30 was $51.7 billion. And Nadella made sure to proclaim that achievement loudly and proudly by making it the very first thing he said in his prepared remarks on the July 22 earnings call. (Well, technically, the first thing he said was “Thank you, Mike, and good afternoon, everyone.”) Nadella followed that greeting with this statement: “We delivered record results this fiscal year, powered by our commercial cloud which surpassed $50 billion in revenue for the first time.”

Over the past 10 quarters, while Microsoft has consistently highlighted the cloud as its primary growth driver in the sub-headlines of its quarterly earnings press releases, this is the very first time that Nadella has opened his prepared remarks with a very pointed and specific reference to the company’s booming cloud business.

4. CFO Amy Hood stated emphatically that “a record number of multimillion-dollar Commercial Cloud agreements” were closed in Q4, including “material growth in the number of $10 million-plus Azure contracts.” Hood also pointed to additional evidence of Azure’s enduring momentum (emphasis added): “And on a strong prior-year comparable, commercial bookings growth was ahead of expectations, increasing 12% year over year, driven by consistent renewal execution and an increase in the number of large, long-term Azure contracts.”

5. Microsoft’s “remaining performance obligation” for its commercial business jumped 23% in Q4 to $107 billion, Hood said, with about half of that to be recognized as revenue in its current fiscal 2021. Hood said those numbers reflect “consistent execution across our core annuity sales motions.”

As you look at the below graphic showing the understandable and inevitable decline in Azure’s growth rate, keep in mind the larger dynamic of Microsoft’s overall mass in the cloud space and its demonstrated ability to convince some of the world’s largest companies to commit their digital futures to the Azure cloud. 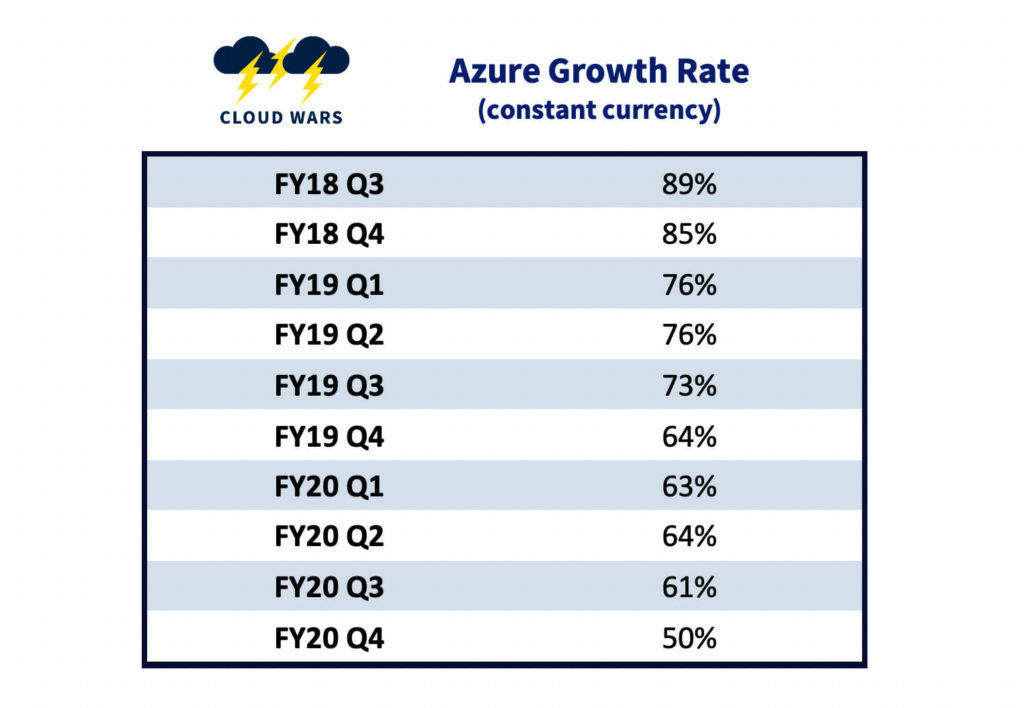 So: is Satya Nadella worried about the Azure growth rate?

I certainly doubt it. While he’s no doubt exerting enormous and appropriate emphasis on his executive team—because that’s what CEOs do—he’s also got to feel pretty good that on the heels of a global economic slowdown, he’s got the world’s largest enterprise-cloud business ($51.7 billion) growing at 32%.

And that within that business, Azure’s revenue is growing at 50%.

Heck no. I bet Nadella might even be smiling about it.

Disclosure: at the time of this writing, Microsoft was a client of Evans Strategic Communications LLC and/or Cloud Wars Media LLC.