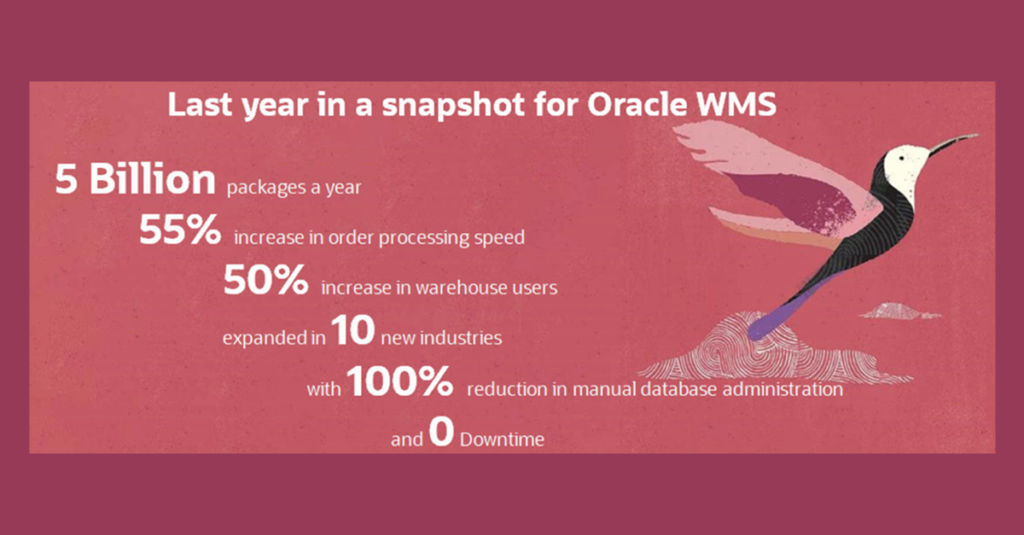 A hypergrowth warehouse-management app owned by Oracle has moved 700 PostgreSQL databases from AWS and Rackspace servers and replaced them all with Oracle Autonomous Transaction Processing running on Oracle Cloud Infrastructure.

The move from AWS and Rackspace to Oracle has enabled the warehouse-management business to perform at levels never before possible, allowed it to leverage full elasticity for performance and cost optimization, enhanced security, and lowered TCO. I’ll offer some specifics on those improvements in just a moment.

When Oracle acquired LogFire in 2016, its cloud-native warehouse-management application was running on AWS and Rackspace servers using PostgreSQL databases. But as demand for superb supply-chain performance began to climb, that combination was unable to meet the escalating needs of LogFire and a search for better alternatives was launched.

Here’s a quick glimpse at LogFire’s massive growth since it switched from AWS and Rackspace to Oracle over the past year—and it’s particularly impressive that LogFire’s hypergrowth occurred during 2020, when supply chains were under relentless pressure and scrutiny as the global economy underwent a massive transformation.

From the case study, here are a few powerful angles that I found to be most compelling about the shift to Oracle from AWS and Rackspace.

Limitations of the AWS environment

On Oracle, performance soared even as workload spiked

Developers could focus on customer-facing enhancements, not maintenance

As the digital economy takes hold across industries and across the globe, supply chains are indispensable parts of the delivery systems essential to the daily lives of billions of people—especially during the COVID-19 pandemic.

And now that LogFire has become Oracle Warehouse Management Cloud and is running on Oracle Autonomous Transaction Processing and Oracle Cloud Infrastructure, customers in the supply-chain and logistics industries are finding that there’s a better way to meet those world-shaping challenges.