Cloud Revenue Surging: How Microsoft, AWS, IBM and Salesforce Will Top $90 Billion in 2018 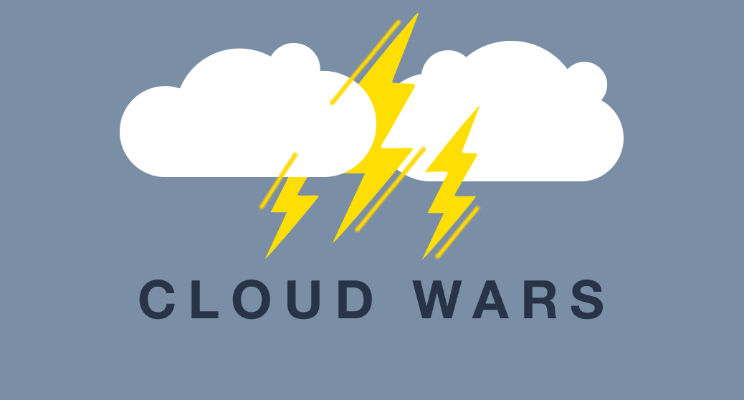 As cloud computing continues to prove that it’s becoming one of the greatest tech-industry growth markets of all time, the four largest enterprise-cloud vendors—Microsoft, Amazon, IBM and Salesforce.com—will almost certainly top $90 billion in cloud revenue for calendar 2018. 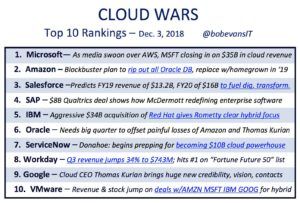 And while these four top-revenue cloud vendors are putting up the most-compelling numbers, each of the players in my Cloud Wars Top 10 are reporting revenue growth of at least 20% for their cloud businesses.

So let’s take a look at the stunning numbers being posted by these four top cloud providers—and please bear in mind that since it’s still early December, these full-year numbers include my own projections for the final few months of 2018.

#2 Amazon: I’m projecting $25.7 billion for 2018 as its AWS unit continues to post extremely strong numbers quarter after quarter. As proof that the world’s not always fair, it’s striking that in spite of how well Amazon is executing in the cloud, Microsoft’s cloud business is not only bigger but is also—somehow—finding a way to grow faster than AWS. For the first 3 quarters of this year, the AWS unit posted revenue of $18.2 billion ($5.44B, $6.11B, and $6.68B), and for Q4 I’m projecting AWS will post cloud revenue of $7.5 billion for a projected full-year total of $25.7 billion.

#3 IBM: I’m projecting $19.5 billion in enterprise-cloud revenue for calendar 2018 for IBM’s large and unique cloud business, whose numbers will become even larger after the acquisition of Red Hat closes. Unlike the other mega-vendors listed in this overview, IBM has not only an “as a services” business but also what I call a “cloud conversion” business that’s unlike anything any of the other leading cloud vendors can offer. About 60% of IBM’s cloud business is in the as-a-service segment, and about 40% in the cloud-conversion segment. For the 12 months ending Sept. 30, IBM said its trailing 12-month cloud revenue was $19 billion, which included a whopping $5.5 billion in Q4 of 2017. If IBM can generate in the current Q4 10% growth on that $5.5 billion, it will reach $19.5 billion for calendar 2018.

#4 Salesforce.com: I’m projecting $13.1 billion for calendar 2018 for Marc Benioff’s company, which recently raised its annual guidance for its fiscal 2020 to $16 billion. Please bear in mind that Salesforce’s fiscal year runs Feb. 1 to Jan. 31, so my end-of-year projection covers just November and December. In its earnings release last week, Salesforce raised its guidance for its current fiscal year to $13.23 billion, so at that pace it’s safe to project that calendar 2018 will come in at $13.1 billion.

Sorry to throw a slew of numbers at you, but sometimes it’s necessary to sit back and get a fix on just how big and how fast-growing the enterprise-cloud business has become.

Because those numbers reflect the pace at which businesses in every industry are turning to the cloud to become the engines of their transformation into end-to-end digital businesses, an end-state that’s an absolute requirement in a world where billions of people from every part of the globe are pursuing digital lifestyles.

And in closing, let me toss one more number out at you: if those four cloud companies can generate on average 27% growth in their cloud businesses in 2019—and Microsoft’s and Amazon’s cloud segments will likely grow much faster than that—then 2018’s total of $90 billion in cloud revenue for those four companies will spike to $115 billion in 2019.

The Cloud Wars—they’re not for the faint of heart!