COVID Crisis May Bring a Cloud Moment for the Banking Industry 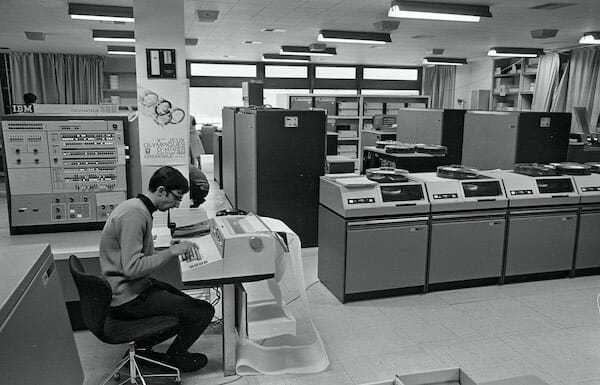 Editor’s note: This article comes from contributor Jiri Kram, a solution architect who studied Fintech at MIT and specializes in cloud computing and blockchain. He is a highly respected commentator on LinkedIn, where he originally published this piece on June 15. This article marks Jiri’s fifth appearance on Cloud Wars. (Read his first four articles here, here, here and here.) While Jiri is a good friend of Cloud Wars, the views expressed are his, and do not necessarily reflect the views of Cloud Wars. And since today’s article from Jiri is about the banking industry, Jiri and I want to disclose that Jiri at one time worked for Deutsche Bank.

Among the many consequences that may come out of the COVID 19 crisis, some banks may end up shutting down their operations. This time around, it might be an even more significant number than in the 2007-2008 crisis. Here is why.

A lesson from the IT industry

For many years, IT was dominated by a simple model: one company sells the computer, another sells software and some other makes money on implementation. Then the cloud happened! At first, traditional IT companies didn’t understand and dismissed the trend as a fad that would eventually go away. Clearly, they were wrong.

Why couldn’t they see it? Because everything still seemed to be working as “normal.” The majority of customers were locked in long-term contracts for both hardware and software; most implementations took many years and swallowed hundreds of million dollars. So, all they needed was a smooth-talking, good-looking sales guy who did whatever it took to scare off any customer even entertaining the idea of trying something else.

That worked for a while, until Amazon Web Service showed that there is no need to own hardware or software. At first, old industrial giants laughed, until they realised they must change too. However, only Microsoft succeeded. Everyone else waited too long, as they were afraid to lose old on-premise revenue. Many became irrelevant and forgotten.

Similar to pre-cloud IT, traditional banks were also extremely dismissive about their deep-rooted inefficiencies. Banks are among the few industries that still run mainframes and depend on programmers who either are retired or close to retirement age.

Do you remember the famous 2012 story when an unnamed UK retail bank decided to “save” money by making a couple of IT employees that look like they do nothing redundant? A few days later people couldn’t withdraw money or send and receive payments, and the bank stopped serving customers for almost two days! Why? Those elderly guys made redundant were among the few remaining who knew how the core system (built 30 years ago) running the bank worked. Ultimately, that bank was fined 42 million GBP and was investigated by The Bank of England.

The impact of that disaster? Those responsible for strategic decision-making in other banks learned a lesson. Namely, that it’s risky to touch anything in IT, and so let’s instead keep it all running “as-is” than similar risk disaster!

For many years this strategy worked quite well, until the emergence of an alternative called Fintech. Just like in the IT industry, most bankers didn’t see the “young” Fintechs as the danger. Customers will always keep money in a traditional bank, the executives said, just like IT executives before them claimed that customers will still buy hardware and software.

The revolution was very slow at first. There were many regulatory hurdles that new Fintechs couldn’t overcome. But lately, something has changed. Customers are attracted by something traditional banks didn’t care much about – customer experience.

Everything. Thanks to cloud technologies such as AWS, building a new bank or financial service is no longer a process that requires massive upfront capital investments to buy hardware, build data centres and pay super-expensive software licences. Quite the opposite. Many banks started as any other start-up, in a shared workplace with a bunch of developers in t-shirts building from prebuild components available in the cloud and open source. This slashed entry costs and allowed Fintechs to focus on what matters to customers, and how customers felt when using their services.

And it worked! The success of companies like Revolut, Monzo, TransferWise, Starling or Tide brought about a revolution in user experience. It started with something entirely unimaginable for an old bank – complete digital onboarding. Yes, you go on the App Store or Google Play and install a new app. Then you use a simplified onboarding process using the capabilities of your device. It usually takes around 15 minutes, and you are in! You are in the UI, designed ground-up to be easy to use and extremely intuitive. All that is missing is you to send some money in from your previous bank. So you transfer some. Bam! You just got 100 GBP.

Now, you can play with the app, send money or pay someone, all super easy. In a few minutes, you feel like you would use Monzo forever. Plus, thanks to Apple Pay, your MasterCard that even didn’t physically arrive is already available for use. So you go out and buy yourself a latte. Boom! You get an instant push message with the Pret logo that you just spent 2.95 GBP for coffee. A few days later, you get a physical MasterCard in your mailbox, and later you redirect all your payments including salary and standing orders. You will likely even forget you used some other bank just a few days before.

The world has changed. Banks that will not change in response will be abandoned by their customers.

Author’s note: The views expressed here are mine alone and do not necessarily reflect the views of my current, former, or future employers.

How Goldman Sachs Is Becoming a Technology Company