For Microsoft, Is Biggest Challenge Amazon, Google, or From Within? 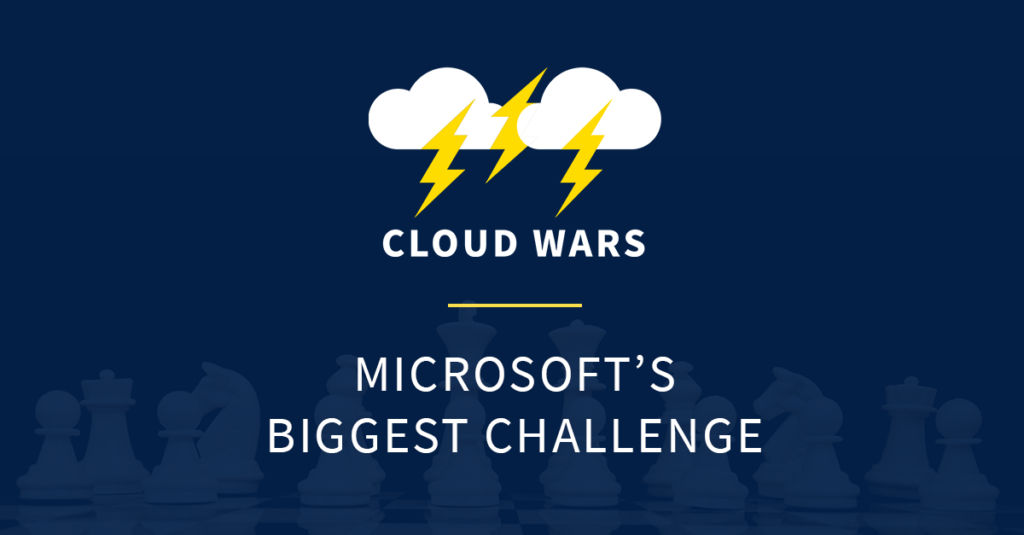 First in a 10-part series on the biggest challenges facing the Cloud Wars Top 10.

Over the past six years, as Satya Nadella has made Microsoft the most-valuable company on the planet and also the most-influential enterprise-tech company, he’s racked up a remarkable set of partnerships with competitors that at times have tried or at least wanted to claw his eyes out.

So Nadella’s challenge is this: as every important cloud vendor is racing to become more relevant to customers by offering a wider range of solutions—and Microsoft’s appetite for growth is as voracious as anyone’s—can Nadella keep these collaborative partnerships in place?

And if you think that’s a no-brainer, take a look:

Late last year, Salesforce, ranked at #3 on the Cloud Wars Top 10, embraced #1 Microsoft and its Azure Cloud in a wide-ranging deal that had to sting bitterly at AWS, which for years had been Salesforce’s preferred public cloud IaaS provider. As I wrote at the time in Amazon Jilted as Salesforce and Microsoft Pair Up for IaaS and Teams: “Salesforce has just tightly aligned its three powerhouse clouds—Marketing, Sales and Service—with Microsoft. Marketing Cloud will now run on Azure—a huge win for Microsoft—and Sales Cloud and Service Cloud will now be closely integrated with Microsoft Teams collaboration solutions.”

Not all that long before pairing up with Microsoft, Salesforce CEO Marc Benioff had lashed out at CRM rival Microsoft, saying to the effect that ‘we’ve sold more CRM in a quarter than Microsoft has in a decade’ And now, Salesforce’s biggest CRM cloud runs on Microsoft!

A year ago, as #5 SAP looked to deepen its relationship with major hyperscalers to improve outcomes for customers, Microsoft clearly held most-favored status. While some of that intense early passion has been waning as Google Cloud is attempting to cut in and become SAP’s BFF in the IaaS class, the combo of SAP and Microsoft Azure continues to drive enormous amounts of revenue for both companies.

In early June 2019, #6 Oracle set its classic go-it-alone persona aside to strike a sweeping “cloud interconnect” deal with Microsoft to help customers committed to running products from both vendors. Even as that focus intensifies, the two companies remain on track for some serious head-to-head competition in the cloud-database wars that are only beginning to heat up. (See Hey Larry Ellison: Microsoft’s #1 Priority Is Replacing Oracle Database.)

While Microsoft competes to some extent with various businesses within #8 Workday, #9 ServiceNow and #10 Adobe, Nadella and team have also been able to forge constructive partnerships with each that have acted as force-multipliers for Azure and the overall Microsoft juggernaut.

The forces of change are powerful and relentless in the cloud. Microsoft’s SaaS business is growing rapidly even as it hosts apps from SaaS providers, Salesforce and Workday are now platform providers, and everybody’s rushing into data and analytics. Nadella’s challenge will be to manage those partnerships through times that are rapidly disruptive for everyone concerned.

If he can succeed in that highly fluid and unpredictable market, Microsoft will very likely remain #1 in the cloud for quite a long time to come.

Can Microsoft Resist COVID Slump and Reach $50 Billion in Cloud?

Disclosure: at the time of this writing, Microsoft was among the many clients of Cloud Wars Media LLC and/or Evans Strategic Communications LLC.