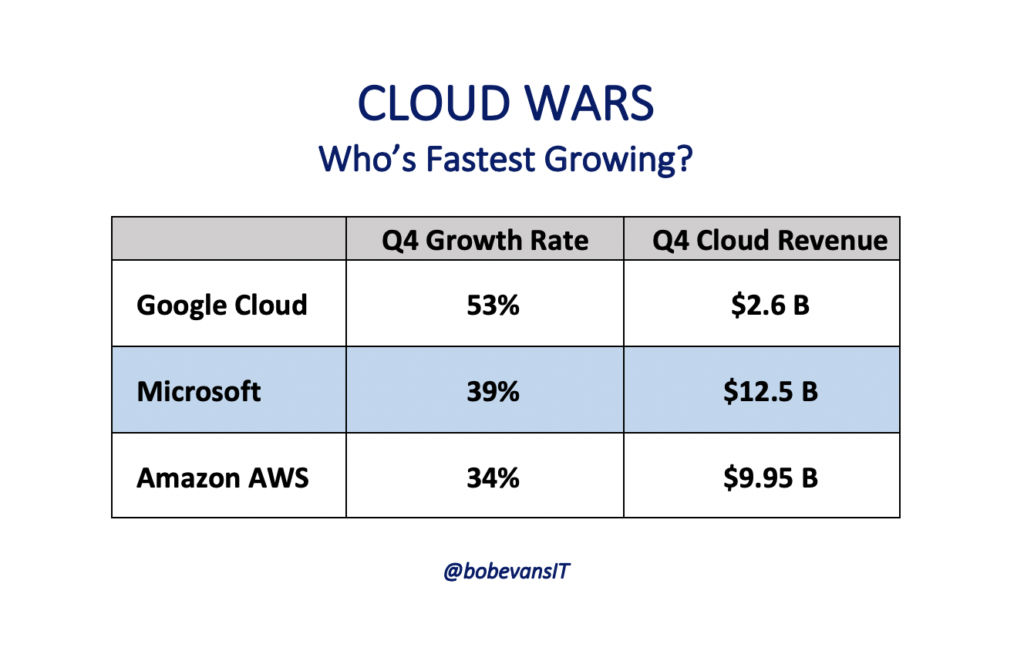 Google Cloud CEO Thomas Kurian said in a CNBC interview this week that his company’s 53% jump in revenue means it is growing faster than market leaders Microsoft and Amazon’s AWS.

The numbers certainly support Kurian’s claim with regard to AWS, whose Q4 revenue of $9.95 billion was up 34%. But the comparison becomes a bit more tricky when it comes to Microsoft.

Now, some might say who cares, because when it comes to cloud revenue versus growth rate, then Microsoft’s cloud business is about 5X the size of Google Cloud, and AWS’s is almost 4X as large.

But in a segment of Kurian’s interview with CNBC’s Jon Fortt called Google Cloud CEO Thomas Kurian on revenue and competition, Fortt asked about growth rates. He got this response:

“We’re very confident that we’re the fastest-growing cloud provider. We have a mix of products in our cloud business as a whole. Ruth [CFO Ruth Porat] mentioned that our Google Cloud Platform revenue grew significantly faster than the aggregate number, and we’re very confident because we’re winning customers.”

One high-growth category for Google Cloud is its hybrid and multicloud platform called Anthos. During their interview, Fortt asked Kurian to describe how Anthos is being received in the market.

“Second, independent software vendors and SaaS companies. They know they have to be across multiple clouds and they want a platform that works across those. And third, we’re seeing strong growth in retail, for example, because people want the ability to run some workloads in their data center and some workloads in the cloud. So we’re seeing good growth in all of those segments with Anthos.”

The ascendance of Google Cloud in the past year under Kurian’s leadership has been one of the major developments in the Cloud Wars. It’s one of the reasons that we named Kurian as our Cloud Wars CEO of the Year for 2019. Check out our extensive video interview with Kurian here. To go deeper, read our in-depth analysis of his impact and the rise of Google Cloud through the related analyses below.

Disclosure: at the time of this writing, Google Cloud was among the numerous clients of Evans Strategic Communications LLC and Cloud Wars Media LLC.