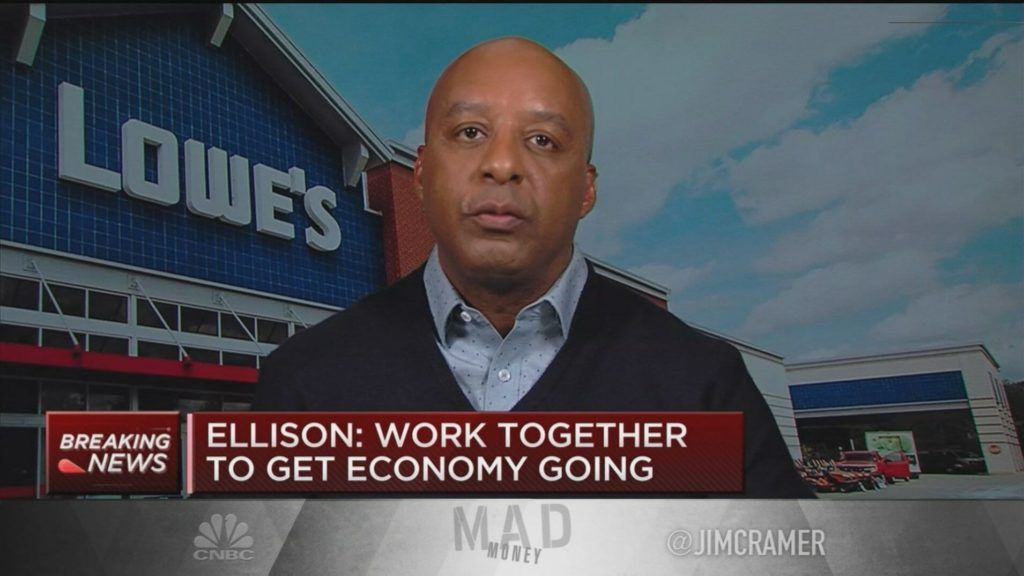 Google Cloud has scored a major victory in showcasing its transformational prowess as the CEO of Lowe’s recently said GC has been indispensable in helping Lowe’s double its online revenue in April and May.

Speaking with Jim Cramer on Mad Money in late May, Lowe’s CEO Marvin Ellison offered broad context for his company’s outstanding quarterly results and the role Google Cloud played in boosting the stability and performance of Lowes.com.

“Customers want to spend money where they have choices and where they have options,” said Ellison, who’s done a terrific job in turning around the struggling big-box retail in his 2 years as CEO.

“You and I have talked a lot about the power of omnichannel. Give the customer the opportunity to shop anywhere they choose: in-store, online, buy online and pick up at store, curbside, you name it.

“We were able to employ all of those things for the first time and it drove an 80% growth in dotcom. But also we had triple-digit growth in dotcom in April. And that triple-digit growth is now also happening in the month of May. So it’s about giving the consumer choices, it’s about giving them the essential things they need for their homes. And we’ve done that well.”

Cramer then asked Ellison about the impact that Google Cloud—which, Cramer said, “has become very aggressive”—has had in replacing a 10-year-old online platform at Lowe’s that was woefully incapable of meeting the modern demands and expectations of customers here in mid-2020.

“We have a great future in front of us.”

Ellison replied: “Jim, if you’re a traditional retailer, there’s 3 things you need to do a great dotcom business: you need talent, you need capital, and you need time.

“We recruited the talent. We’ve invested the capital to make sure we do it correctly. And now at about 12 months into this we’re starting to see that hard work pay off,” Ellison said in teeing up his perspective on Google Cloud’s impact.

“There’s no way we could have the sustained levels of growth online if we hadn’t made that platform migration to Google Cloud. And we have a series of other really great functionalities you’re going to see: from a one-click checkout, search and navigation, the ability to schedule and do all types of visibility into order destinations online.

“And we’re going to be rolling out buy-online with pickup via in-store lockers. We’re going to modify curbside delivery to be more digitized. We have an array of things that are going to give us one of the best-in-class dotcom platforms. And when you combine that with a really great-executing retail business, we think we have a great future in front of us.”

“As we moved through the quarter, there was also a sharp uptick in sales on Lowes.com,” Ellison said on the call.

“As customers began to shop more and more online, our investments in online infrastructure and progress to date with the Google Cloud migration greatly improved site stability and allowed us to effectively handle the increased traffic.”

Ellison noted that online sales to the company’s vital segment of professional builders and contractors grew even faster than the overall 80% increase, and added that online now accounts for 8% of total company revenue.

Going multi-channel to meet the demands of today’s customers

In the Q&A portion of the call, Ellison was asked to explain the recent “digital surge” and significance of the new platform in ensuring that Lowe’s can be a true multi-channel provider.

Ellison’s reply hinged on a point that is critical across all fronts in the Cloud Wars. Namely, that customers—whether consumers or businesses—have begun setting the rules and they simply won’t do business with companies that can’t or won’t meet their expectations for how that business is to be done.

With its ancient online platform built a decade ago, Lowe’s simply could not meet the demands of today’s customers.

“And so we’re in a process of a transition to Google Cloud that will be complete this quarter,” Ellison said.

“It’s allowed us to take on that demand and what we’re seeing is that customers simply want to shop the way that they choose to. In the past, we couldn’t accommodate that.

“As [another Lowe’s executive] mentioned in his prepared comments, when we started to get requests from customers for curbside pickup, we got that up and going in three days. I mean, this time last year, it would’ve been impossible to do that because we didn’t have the infrastructure.”

The impact Google Cloud has had at Lowe’s marks another big success in its retail-industry efforts, which CEO Thomas Kurian has consistently described as a priority since taking the helm at Google Cloud 17 months ago. For our most recent analysis of that, with a specific look at GC’s work with Macy’s, please see Google and SAP Fusing Cloud and AI in Next-Gen Apps for Industries.

At Lowe’s, the hard-charging Ellison says that while there’s still much work to be done, the progress and momentum generated by the new digital platform is enormous.

“The good news is Lowes.com will only get better for the balance of the year,” Ellison said on the earnings call.