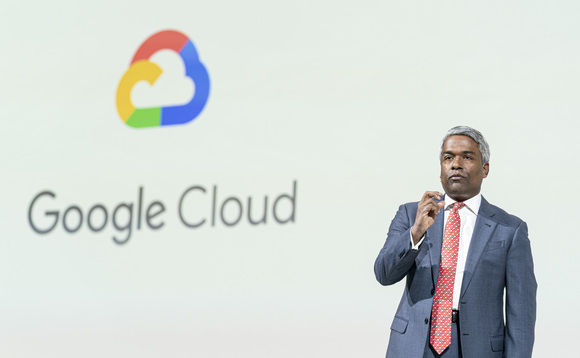 Powered by its 12-month run as the world’s fastest-growing major cloud player, Google Cloud has leapfrogged Salesforce and claimed the #3 spot on the Cloud Wars Top 10 behind #1 Microsoft and #2 Amazon.

This latest leap on the list of the world’s largest and most-influential cloud providers marks yet another highlight in the remarkable 2-year run of Google Cloud CEO Thomas Kurian.

Since taking over as CEO in January 2019, Kurian has totally transformed the company from being technologically advanced but largely tone-deaf about customers to one fully cognizant that in today’s turbulent world, customer empathy is every bit as crucial to success as technological brilliance.

My decision to elevate Google Cloud (now #3) above Salesforce (now #4) on the Cloud Wars Top 10 comes in spite of the fact that Salesforce had another outstanding year—just 2 weeks ago, I named Salesforce founder Marc Benioff as CEO of the Year for 2020.

And with Slack about to come aboard, Benioff & Co. will no doubt continue to have an outsized impact on the global business-technology marketplace in 2021 and beyond.

But that’s the very essence of the Cloud Wars in these extraordinary times: being great—even being consistently excellent—has become table stakes. And for all of Salesforce’s achievements in 2020 and potential for 2021, I believe Kurian and Google Cloud are having and will have more of an impact not only for their customers but also on the entire cloud industry as well.

And when I say “the entire cloud industry,” please bear in mind it represents the greatest growth market the world has ever known, daily influencing in profound ways the lives of billions of people and hundreds of thousands of businesses.

Here are a few of the reasons why I have moved Google Cloud up to #3:

Google Cloud is the lone hypergrowth vendor remaining in the Cloud Wars Top 10. And yes, I fully understand that its revenue base is much smaller than that of Microsoft and Amazon, so higher growth rates are to be expected. But as noted above, Google Cloud is growing 50% faster than the cloud businesses of Microsoft and Amazon, and it is the only company on the Cloud Wars Top 10 whose revenue increased from Q2 to Q3.

While many of the major cloud vendors are rushing into vertical markets with powerful new capabilities and solutions, Kurian was the first to speak about the industry-specific revolution publicly and emphatically. His vision and leadership for this new high-potential category has forced every other major cloud vendor to allocate big-time resources to vertical solutions that will have huge benefits for customers. For more on that, please see Google Cloud Booms: Thomas Kurian’s Vision for World’s Fastest-Growing Cloud.

3. The Primacy of the Customer

Again, every big vendor has this chapter in its playbook (and certainly some study that chapter more rigorously than others), but Kurian has turned what was an obligation into a competitive differentiator. And no CEO has spoken more consistently or passionately about the need for, in Kurian’s terms, “customer empathy” and the need to “meet customers where they are.” While those concepts have become quite common, they were most certainly not part of everyday cloud conversations when Kurian began citing them.

I have cited this line from Kurian a handful of times this year because, while it is stated simply, it has profound implications for this industry and for customers who will spend many hundreds of billions of dollars on cloud services and technologies this year. Speaking at an investors conference a year ago, Kurian was asked if he thinks Google was “late” to the cloud market and if it will be able to “catch up” with rivals holding much greater market shares (Microsoft and Amazon).

In reply, Kurian offered this extremely perceptive perspective on where the worlds of business and technology have been versus where they are headed:

Today, where people want cloud to be is not about [infrastructure and packaged apps]. It’s really about, ‘Can you give me new capabilities that I could not get before?’ So, we’re very focused on executing our plan. Lateness, earliness, I don’t worry about that.

We don’t get distracted by anybody telling us about where we are in the market. We’re focused on executing. When we win customers, they say what we’re offering is truly unique.

And we don’t think that the way cloud and the market looks 3 years out will be the way it does today.

I’ve put that final sentence from Kurian in boldface because it is something that every cloud-industry executive should remind herself/himself about each and every day: as customer needs change, so too must the cloud industry change. That might seem painfully obvious, but just look around at how too many cloud vendors describe what they offer and what it can do—they’re taking yesterday’s ideas to the conversations of tomorrow.

For better or worse, Google has become one of the most powerful—and possibly the most powerful—companies on Earth. Formerly globbed together in quarterly earnings calls with “other bets,” Google Cloud had such success in Kurian’s first year that the parent company began breaking out some of its financial details a year ago. And later this month when Alphabet releases Q4 and full-year results, it has promised to break out even more financial details for Google Cloud. This is clearly an effort to showcase the fact that Google Cloud has become the fastest-growing major vendor in one of the world’s most-strategic markets, and it’s remarkable how quickly Kurian has elevated the performance and potential of Google Cloud.

And speaking of remarkable, check out some of the language used by Alphabet executives regarding Google Cloud’s accomplishments, its growing significance to the parent company, and their decision to release more financial details about their high-growth cloud unit: Google Cloud Stellar Performance Triggers Special Status from Alphabet. The big takeaway is that CEO Sundar Pichai and CFO Ruth Porat both state unequivocally that they’re prepared to unleash massive new investments to fuel future growth opportunities for Google Cloud following its exceptional 2-year run under Kurian.

But Google Cloud and Thomas Kurian have something uniquely special going on right now, and I believe that 2020 offered only a glimpse of what the company can achieve. To get an in-depth and comprehensive understanding of that potential, be sure to read our recent analysis: Google Cloud Already Fastest-Growing Cloud Vendor, but Thomas Kurian’s Just Getting Started.

If, as Kurian said, customers today are looking at the cloud and wondering, “Can you give me new capabilities that I could not get before?”, then Google Cloud has earned the right to be #3 on the Cloud Wars Top 10.