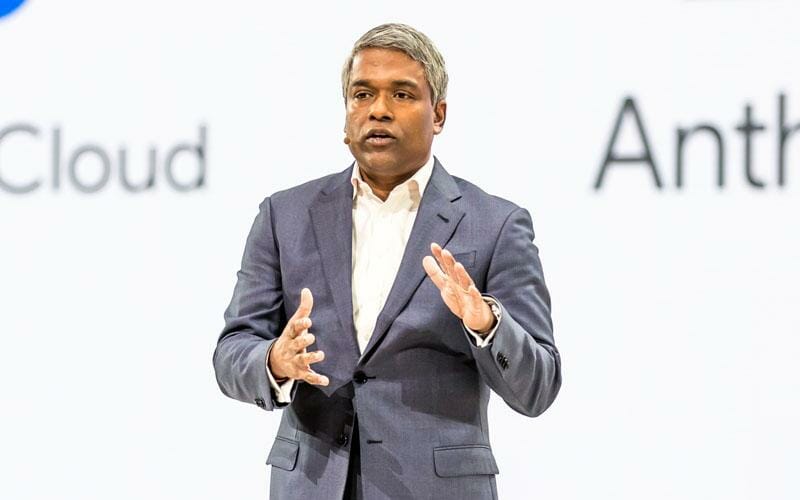 While Google Cloud generated only 7.5% of parent-company Alphabet’s $46.2 billion in Q3 revenue, the cloud unit’s surging growth and massive potential have spurred Alphabet to begin breaking out Google Cloud’s financial results in a separate reporting segment.

(On my weekly Cloud Wars Top 10 rankings, Google Cloud is #4 after beginning the year at #6.)

Although that might sound like little more than a bookkeeping exercise, remember that Alphabet is one of the world’s largest, most valuable, and most-influential corporations in the world.

So for Google CEO Sundar Pichai to make a very particular point about this new status for Google Cloud during the Q3 earnings call was indeed a very big deal.

Because it shows that in his two years as CEO of Google Cloud, Thomas Kurian has totally convinced Alphabet’s top executives and board members that it richly deserves an ongoing level of aggressive investment and has distinguished itself as a true standout in the wildly competitive portfolio of high-growth businesses within Alphabet.

CFO Ruth Porat even noted during the call that Google is ramping up its investments in Google Cloud because in the past it had fallen behind its competitors and so must now aggressively strive to make up lost ground.

“The point that both Sundar and I have underscored is that we are investing aggressively in cloud, given the opportunity that we see and frankly the fact that we were later relative to peers,” Porat said.

“We’re very encouraged by the pace of customer wins and the very strong revenue growth in both GCP Workspace. But we do intend to maintain a high level of investment to best position ourselves.”

Speaking of that “very strong revenue growth,” check out these results that Kurian has delivered over the past 4 quarters:

In last week’s earnings call, Pichai and Porat outlined some of the reasons behind Google Cloud’s ongoing successes and described how that success was in turn driving their decisions to invest more heavily in Kurian’s unit even as Alphabet was pulling back on investments elsewhere in the sprawling company.

I’ll get to those comments in a second, but first I want to highlight the unusual decision to start breaking out even more detail for Google Cloud. Remember that until the company reported 2019 Q4 results almost a year ago, it did not break out any details about Google Cloud. And now, just a year later, it’s taking an additional step in providing deeper financial visibility into the high-flying cloud unit.

Here’s Pichai from the earnings call on the decision to release more financial details about Google Cloud as part of its “multi-year path ahead”:

Starting with the results for the fourth quarter of 2020, we’ll break out Google Cloud as a separate reporting segment. I’m working with Ruth and Thomas Kurian to make investment decisions to drive progress here.

As we have told you on these calls, given the progress we are making and the opportunity for Google Cloud in this growing global market, we continue to invest aggressively to build our go-to-market capabilities, execute against our product roadmap, and extend the global footprint of our infrastructure.

With this segmentation, you’ll additionally see information about the scale of our investments, which should help you gauge the progress we are making on the multi-year path ahead to create sustainable value.

In the Q&A portion of the call, analyst Heather Bellini of Goldman Sachs asked Pichai about the impact Kurian has made in his 2 years as Google Cloud CEO, and her question included this excerpt: “What do you see as the biggest changes [Kurian] has put into place that has allowed the business to start gaining what appears to be materially more share? And as you look ahead to 2021 and what’s going on with digital transformation, what would you say his top strategic priorities would be?”

Here’s Pichai’s reply, which gave a bit more detail than the broad overview about Google Cloud that he gave in his opening remarks.

“A couple of things stand out for me. I think it’s been a very consistent, focused strategy,” Pichai said, highlighting Kurian’s early and unwavering “focus on the five major geographies; the four customer segments; and the six priority industries: healthcare, retail, financial services, media and entertainment, manufacturing, and public sector.

“That focus, along with going deeper and scaling our go-to-market both in terms of our people and our partners, I think that’s been key,” Pichai said.

Noting that Kurian has put particular emphasis on turning some “key differentiators” into “unique industry solutions,” Pichai said he is “very excited” that Google Cloud is now able to offer those industry-specific solutions as services that can be priced on value, which is quite different from the hugely competitive pricing the company must offer in IaaS.

On top of that, Kurian’s ability to get a rapidly expanded sales team not only on board but also bringing in revenue has been a big plus.

“I’m pleased with the execution,” Pichai said. “Obviously there is a time lag between when you hire and train the salespeople, and then when you can enable them to be more productive.

“And that’s the investments Ruth [Porat] has been talking about and I can see it ramping and I can see the results come into play.”

Regarding those comments from CFO Porat, here are a few highlights that certainly show her appreciation for the performance of Google Cloud and Kurian, including her comment about focusing on “our highest-priority areas like Google Cloud”: