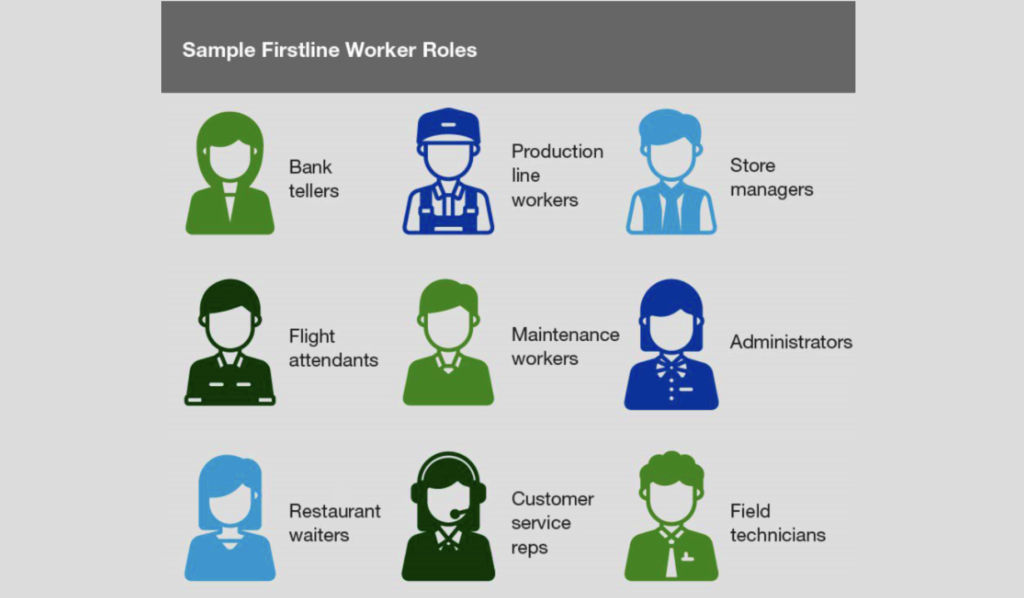 Google Cloud, looking to differentiate itself and raise its profile in the hotly contested enterprise-cloud market, is going right up against market leader Microsoft in the quest to deliver mobile collaboration and communication tools to 2 billion “firstline” workers currently using little or no enterprise tech.

For close to a year, Microsoft—starting with CEO Satya Nadella—has been touting the massive opportunity offered by these firstliners in retail stores, healthcare facilities, airline crews, and other professions now being actively interconnected via mobile devices to the digital revolution. A recent Microsoft blog post headlined New research highlights massive opportunity to empower Firstline Workers with technology (source of the above graphic) offers this perspective:

“These are the more than two billion Firstline Workers worldwide, who work in roles that make them the first point of contact between a company and its customers or products,” writes Microsoft corporate VP Emma Williams.

“Firstline Workers comprise the majority of the global workforce and play a critical role in the global economy.”

The blog post by Williams also refers to the results of a research study conducted by Forrester Consulting finding that while the potential market for firstline workers is enormous, a huge gap exists between the views of management and firstline workers over the impact relevant technology could have.

“But while 77 percent of Firstline Workers agree or strongly agree that technology is important to their roles at work, this segment of the workforce is often left out of enterprises’ digital transformation investments,” writes Williams in her blog post.

“In fact, the study revealed sizeable gaps between the perceptions of management and the actual experiences of Firstline Workers.

Only 23 percent of Firstline Workers strongly agree that they currently have the technology they need to be productive, yet 50 percent of managers say they feel the tools they offer make employees’ jobs easier and/or more satisfying, enough to be considered a competitive perk.”

Until last week, Microsoft was standing completely alone in recognizing and/or pursuing this massive market—I could not find any significant mention of this firstline market from any of the other major cloud vendors.

But that all changed rather suddenly when Google Cloud CEO Thomas Kurian made his first public presentation about his company’s strategy since taking the CEO position late last year.

While Kurian’s presentation at last week’s Goldman Sachs investors conference was primarily an outline for how Google Cloud will “compete much more aggressively” in the enterprise market, he also took aim squarely at these very same firstline workers that Microsoft has been courting. And Kurian did so in language that makes it perfectly clear to see that Google Cloud intends to take its G Suite productivity tools and related technologies right up into Microsoft’s grill in the competition for the hearts, minds and wallets of companies where these firstline folks work.

“Lastly, in the area of productivity, for many, many years, people were focused on productivity for professional workers. There’s about 1 billion professional people on Earth—people who work in corporate offices—but there are 2 billion-plus front-line workers,” Kurian said near the end of his prepared remarks at the Goldman Sachs event.

“Front-line workers are people like pilots, field-service technicians, the person who comes to repair your television, and the person in the retail store. Our productivity and collaboration solutions not only meet the needs of the people in the corporate offices—allowing them to create information, share that with other people and collaborate in a secure way—but it also brings collaboration to the front line,” he said.

“And when I say the front line, I mean the people who use a mobile phone and want to ask the retail-store manager, ‘Can you tell me if we’re stocked out of this particular product, because I’m helping someone in the store?’ Or the field-service technician who’s trying to repair a device in a factory and is asking when the spare part will get there,” Kurian said.

Among the customers cited by Kurian for using the Google Cloud apps as their enterprise-collaboration solution were Colgate and the City of Los Angeles.

The Coming Battle for Firstline Users

So it looks like Microsoft’s getting some, if I may, firstline competition from Google in this fascinating market that would expand within the next couple of years to hundreds of millions of firstline workers out of the 2 billion that both Kurian and Microsoft CEO Satya Nadella say are ideal prospects for these emergent solutions.

But don’t expect Microsoft to do anything but intensify its efforts because in Microsoft’s January 30 earnings call, Nadella made it perfectly clear that his company intends to pursue this huge market with great intensity.

“Microsoft 365 empowers everyone – enterprises, small businesses, and the more than 2 billion firstline workers – with an integrated, secure experience that transcends any one device,” Nadella said on the call.

“This quarter we introduced new capabilities to empower firstline workers in the service and task-oriented roles to communicate and collaborate more effectively on the go, with mobile schedule management, location sharing, as well as the ability to easily record and share secure audio messages.”

We should expect to see the developments in these first-ever approaches to a huge and underserved market become one of the most fascinating—and hotly contested—sectors in the Cloud Wars as two of the planet’s most successful and innovative companies try to grab the mantle of category king for firstline workers.