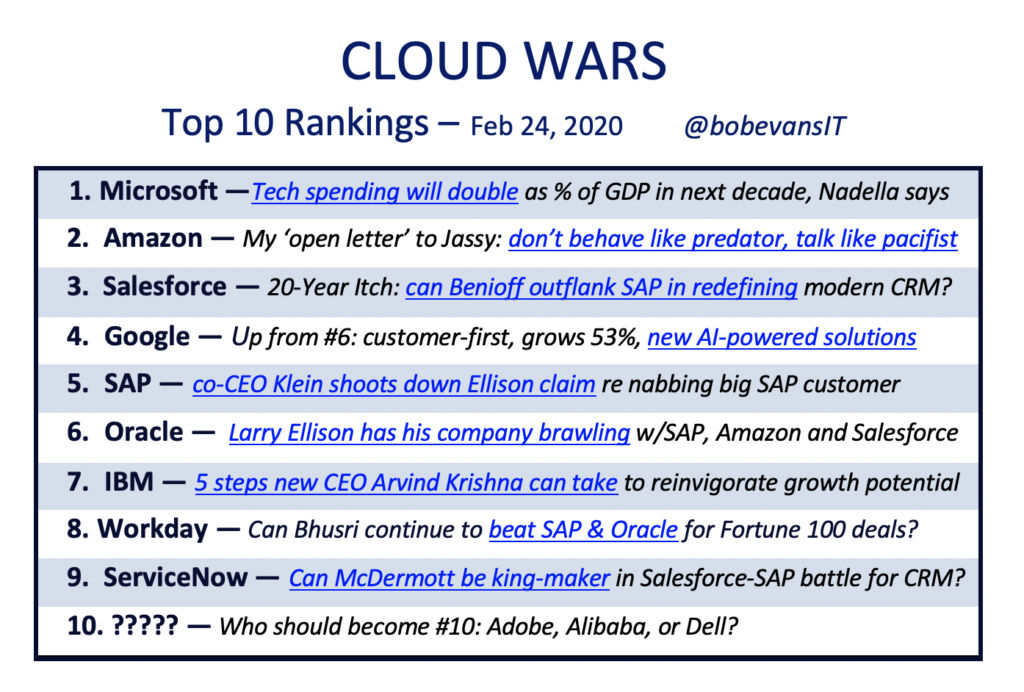 Continuing its rapid ascent under CEO Thomas Kurian, Google Cloud has jumped two spots to #4 on the Cloud Wars Top 10 on the strength of its revitalized strategy, 53% revenue growth, and launch of an unprecedented type of AI-powered industry-specific solutions.

Leapfrogging SAP and Oracle, Google Cloud now holds the #4 spot on the Cloud Wars Top 10. The company sits behind #1 Microsoft, which has held the top spot for the past 2 years; #2 AWS, which many media and analysts still bizarrely claim “rules the cloud”; and #3 Salesforce, which is now the only SaaS vendor among the three trillion-dollar hyperscalers at the top of the cloud world.

#5 SAP and #6 Oracle continue to perform very well in the cloud with cloud-revenue growth rates of about 35% for SAP and in the high 20’s for Oracle. Meanwhile, however, Google Cloud’s ascension is the culmination of a superb and breathtakingly rapid turnaround under the leadership of Kurian.

After accepting the CEO position at Google Cloud in late 2018 and officially taking over in January 2019, Kurian has in many respects turned the company upside-down. (For these achievements, we selected Kurian we selected as CEO of the Year for 2019.)

Some of Kurian’s biggest moves at Google Cloud:

I believe that final achievement, around industry-specific and deeply analytical solutions for digital transformation, will become one of Kurian’s and Google Cloud’s crowning achievements as business customers demand that the enterprise cloud extend far beyond IaaS and help create powerful analytical solutions fully exploiting the transformative powers of ML and AI. (You can get the full story on that from our recent analysis headlined Google Launches New Era in Cloud with AI-Powered Industry Solutions.)

So in spite of how far Google Cloud has come in the past year under Kurian’s leadership, the real test begins now as customers become more demanding, the pace of change continues to accelerate, and as Google Cloud’s competitors understand very clearly that the company can now not only dream and create but also execute and deliver at world-class scale.

Speaking at a recent investors conference, Kurian was asked if Google Cloud’s growth spurt, though impressive, might be just too little and too late to catch up with Microsoft and AWS.

“Today, where people want cloud to be is not about [infrastructure and packaged apps]. It’s really about, ‘can you give me new capabilities that I could not get before?’

“So we’re very focused on executing our plan. Lateness, earliness, I don’t worry about that,” Kurian said. “We don’t get distracted by anybody telling us about where we are in the market. We’re focused on executing. When we win customers, they say what we’re offering is truly unique.

“And we don’t think that the way cloud and the market looks 3 years out will be the way it does today.”

Kudos to Kurian and #4 Google Cloud—the fastest-growing player in the Cloud Wars Top 10.

Disclosure: at the time of this writing, Google Cloud was one of the numerous clients of Cloud Wars Media LLC and Evans Strategic Communications LLC.