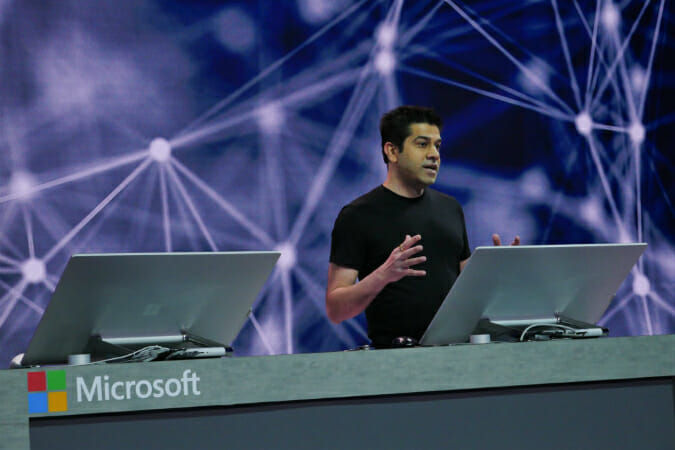 Exactly one year after longtime rivals Microsoft and Oracle paired up on a cloud-interconnect deal, Microsoft is now saying that replacing Oracle on-prem databases with Microsoft cloud databases has become an absolute top priority.

First let me share the exact comment, and then I’ll offer some fascinating perspective on how and why Microsoft believes it can unseat database-leader Oracle as the world surges to the cloud.

Speaking at an investors conference on June 2, Microsoft corporate VP of data and analytics Rohan Kumar said, “So we definitely see a lot of discussions around that. In fact, what I will say is migrations, not just of SQL Server but a lot of the on-prem databases and their corresponding workloads to the cloud, is our #1 motion.”

Hey, unfettered competition is a great thing. But this declaration from Microsoft does fly in the face of the love-fest the companies have had (at least in public) over the past year ever since they revealed their cloud-interconnect commitment. (See Microsoft-Oracle Shocker: Customers Win as #1 and #6 Vendors Pair Up.)

So a few questions arise:

Kumar was speaking at the BofA Merrill Lynch investors conference with Kash Rangan, BofA’s top software analyst. Here are some key outcomes and excerpts from that conversation.

What’s driving the heightened interest in Azure SQL and other Microsoft cloud-native databases?

Across a few of his exchanges with analyst Rangan, Kumar pointed out several factors that have, over the past decade or more but particularly in the past few years, begun to win the hearts and minds of CIOs, CTOs and CEOs:

“Everyone’s looking at becoming a data-driven company where you have decisions that are made based on systems that actually give you the insights that are needed,” Kumar told Rangan. “This could be around better engaging with customers, building better products, or even savings on operational costs by having a very deep understanding of the value chain. And at the heart of it, any such transformation requires a modern data platform, especially heavily focused on a cloud-native design that allows you to very economically scale, and do predictive analytics.”

In the context of cutting costs triggered by the global slowdown from COVID, Kumar added this perspective:

So there’s a cost element there where our customers are looking at that and saying, ‘Look, how do I move to a cloud-native service that significantly reduces not just the time but the cost?’ On the operational side, of course, we’re seeing significant growth in the migrations. So imagine existing SQL Server customers who are looking to move their workloads to the public cloud to save on cost and build more intelligent applications by extending their workloads. The same thing we see with Cosmos DB, where a lot of the NoSQL workloads around Mongo and Cassandra.

Essentially, a lot of our customers are looking at expediting their move of their operational databases to both SQL, Cosmos DB and our open source offerings.

Is there objective evidence showing that customers are expressing a preference for Microsoft databases over longtime market leader Oracle’s?

BofA’s Rangan certainly believes there is. Rangan, who has also followed Oracle closely for many years, made that expressly clear in this set of questions for Kumar:

“We do our IT-buyer surveys,” Rangan said. “Perennially, over a period of time, Microsoft had always come in second or third in terms of consideration. Now in the last 2 years, Microsoft has shot up into the #1 position with respect to what customers are looking at, and Oracle slipped to the #2 position. How did this happen? And what does this mean for the future of the database market?”

Here’s the core part of Kumar’s reply that reflects the long and consistent effort by Microsoft to become a true enterprise-class database provider:

“If you look at the focus we’ve had around high availability, disaster recovery, the focus on in-memory processing, and just looking at hardware trends—how do we leverage SSDs, a lot better GPUs—and more recently, if you look at process and memory, that’s still becoming a big thing. So there’s been a very laser and intentional focus on meeting the needs of the highest class of demanding enterprise customers,” Kumar said.

A few minutes later, Kumar added that customer surveys from not only BofA but also other investment firms also put Microsoft ahead of Oracle in the minds of buyers.

“And part of that is the genesis of Azure—go back to our mission, we talk about empowering every human and every organization to achieve more, it’s really the basis of that comes down to us being a tools company and how do we sort of provide that to make things easy.

“So it’s been fascinating—we’ve seen several analysts, of course, like you mentioned, in a lot of reports, we are coming across as the preferred vendor to run mission-critical applications.”

Later in the conversation, Rangan came back to the issue of customers replacing Oracle databases with Microsoft databases by asking this:

“I heard from one of your resellers that in fiscal ’19… there were a certain number of databases installed by the incumbent market leader that were actually replaced by Microsoft Azure SQL Server. Can you talk to us about what are you hearing from customers and partners with respect to any appetite, or is it just completely made up, to replace on-prem databases, albeit their superiority and what-not with a Microsoft cloud-based database?”

Rohan answered by describing a “very healthy trend” for database replacements. “There is a very healthy trend in terms of migrations that we see from even competitive databases, on-prem, not just to SQL Server, but even to things like Postgres, to things like Cosmos DB, depending on the nature of the workload that they’re running,” Kumar said. “So if you believe this specific application is going to be strategic for you 5 years from now and want to make an investment that essentially modernizes it for performance, scale, security, ease of use, predictive intelligence, and integrations, then there are lots of high-value capabilities we’ve added to our PaaS services.”

And Kumar then stated flat-out that the migration of Oracle on-prem databases to Microsoft cloud databases is his primary objective.

“So we definitely see a lot of discussions around that. In fact, what I will say is migrations, not just of SQL Server but a lot of the on-prem databases and their corresponding workloads to the cloud, is our #1 motion.” [“Motion” is Microsoft-speak for “activity.”]

Another big question: how will Oracle respond?

Not to be outdone, Rangan chipped in with an automobile metaphor. And while fancy-car connoisseur Ellison will no doubt agree with Rangan’s comparison of Oracle Database to a Ferrari, the Uber alternative is one that I don’t think Ellison will accept.

“The way I explain what’s going on in the database market,” Rangan said, “is that I tell clients, ‘Look, Ferrari is a great car, but the use-case for Uber is very different. And people at the margin want Uber. They don’t need more Ferrari.’

“So that’s how I would characterize a shift in the database market from on-prem to—it’s not a question of this or that, but where the incremental demand is coming from is more Uber.”

Oracle releases its fiscal-Q4 earnings tomorrow (June 16) and Ellison will have *plenty* to say about how well his new cloud-native Autonomous Database is doing in the market. And I doubt very much if Ellison’s been finding common ground with those who think Microsoft can overtake Oracle in the massive database market.

But as happens so often in the Cloud Wars, the big winners will be the customers who get to continue pitting Oracle and Microsoft against each other in heavy-investment innovation to determine who’ll be the ultimate leader in cloud-native databases.

Disclosure: at the time of this writing, Microsoft and Oracle were among the many customers of Cloud Wars Media LLC and/or Evans Strategic Communications LLC.