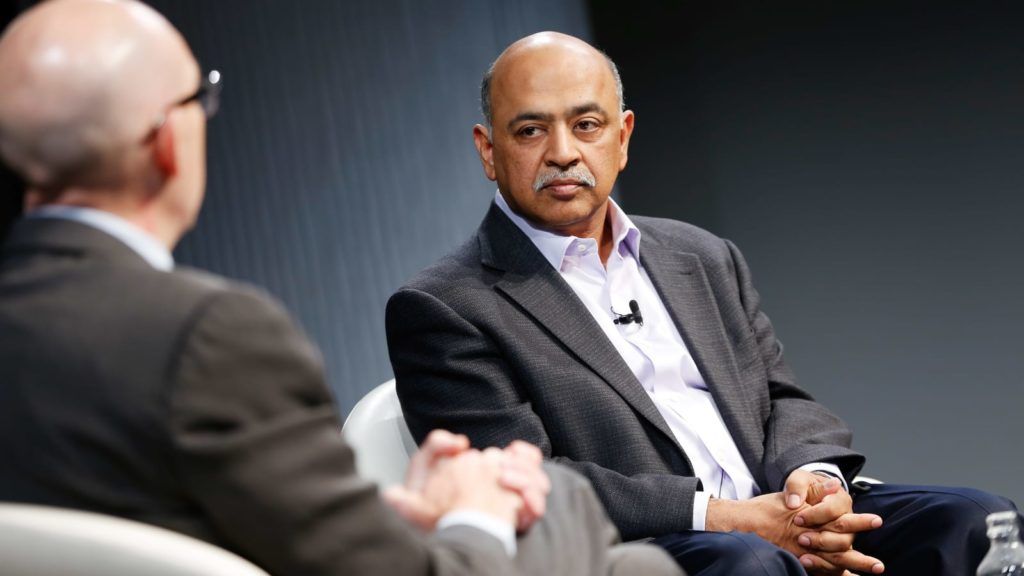 In a recent interview with CNBC’s Jon Fortt, Krishna made the case that the deep-tech trio of Linux, containers and Kubernetes position IBM for victory in the Cloud Wars against its much larger and faster-growing competitors.

Highlighting the range of cloud technologies IBM acquired in its $33-billion acquisition of Red Hat, Krishna said, “As people embark on this transformation to cloud, there is going to be an architectural war. And in that war, we believe the winning architecture is going to be Linux, containers and Kubernetes, which is part of Red Hat’s portfolio.”

That’s a nice hand for the hybrid-cloud market, to be sure. But every single one of IBM’s well-heeled and well-regarded rivals can make the case that it sports a tech trio as good as or better than IBM’s. For comparison’s sake: in my Cloud Wars Top 10 rankings, Microsoft is #1, Amazon #2, Google #4, and IBM #7.

In leading with his claim of technology superiority and the outbreak of an “architectural war,” Krishna missed a chance to showcase IBM’s true strength and differentiation in the cloud. Namely, its unmatched ability to pair that technological acumen with deep industry expertise and decades-long relationships with the biggest companies in the world. (For more on Krishna’s move to CEO, please see Will IBM’s New CEO Shake Up the Company or Simply Shuffle the Pieces?)

With more and more business-side leaders either making strategic decisions about technology or at least heavily influencing them, I just don’t buy that the first thing a CEO or CFO or CMO considers about which big cloud vendor to choose is “architectural wars.”

Are they aware that such competitive battles and deep-tech carping among the various vendors is taking place? Of course they are.

Do they really make that an overriding concern in their evaluations of strategic tech partners? Possibly—but that discussion would make up items 16 and 17 on an 8-point business-strategy agenda.

And do those business leaders really want to muck around in the deep details of Linux, containers and Kubernetes when the questions uppermost in their minds are:

Later in the interview, Krishna even alluded to his company’s wide-ranging expertise in services and industries. But it came across almost as a toss-in after a long and highly detailed discussion of Linux-containers-Kubernetes.

I strongly believe Krishna erred in leading with deep-technology as the defining issue, rather than his company’s unique ability to pair powerful tech solutions with high-value industry expertise.

If Krishna’s serious about being able to take on and beat customer-centric powerhouses like Microsoft, Amazon and Google, then he must frame his arguments around solving very big and real and serious customer problems and not on the narrow and arcane issues of enterprise-technology “architectural wars.”

But then, even if you have the technology, many of our clients are going to require expertise to help them: ‘Which of the applications should I migrate? Which ones should I modernize? Where is the return on those applications that may need to scale up and down and give me greater intimacy with all of my clients?’ And we bring the expertise to do that with our services teams as well as help our clients run this infrastructure in a more effective and efficient way than they could. And that provides both resiliency and modernization in the cloud.

Oh yes—and he also said sales leader Bridget van Kralingen, the new senior VP of global markets, “has a wonderful empathy with all of our clients and a lot of expertise in industries, and in providing these services to our clients.” In his Day 1 letter, Krishna said van Kralingen will “focus on simplifying our go-to-market strategies across all business units as well as strengthening IBM’s client-centric culture.”

How Krishna can right the ship and prepare for battle

Arvind Krishna’s a great guy with a fabulous track record across his 30 years at IBM. He has earned the respect of many people inside and outside of IBM. So I really don’t want to come across as grumpy and curmudgeony just as the guy’s getting his CEO feet on the ground.

But Krishna will not be able to take IBM where he wants to go if his answer to questions about competing with 3 of the biggest and smartest companies in the world—Microsoft, Amazon and Google—goes like it did in this answer to that a question very much like that from CNBC’s Fortt:

So what are our special assets? People accept that Linux is the operating system that is going to be the majority in the future. Containers is the correct way to exploit the portability of workloads as well as the “write once, run anywhere” depending on whatever’s appropriate, be that a private cloud or a public cloud. And Kubernetes is the way to do automation and to really bring a lot of complexity-reduction or simplicity to how you get the work deployed.

We believe that with Red Hat and IBM, those three pieces are the correct architecture to go and succeed, and with the number of people we have working in both the upstream open source, as well as hardening those technologies into products that can be easily consumed by the enterprise, that’s the special sauce that we bring to the mix.

IBM is much more than technology. It is much more than services and industry expertise. It is very much both of those things, and when it excludes one or the other, it is a far less capable, compelling and appealing company.

As Arvind Krishna settles in as CEO, I hope he will reframe—dramatically—how he talks about his company, its capabilities, its customers, its culture, and its competitors.

Because with all of that, Krishna has a great story to tell. But the longer it takes for him to tell it, the more opportunity he’s giving customers to go elsewhere.