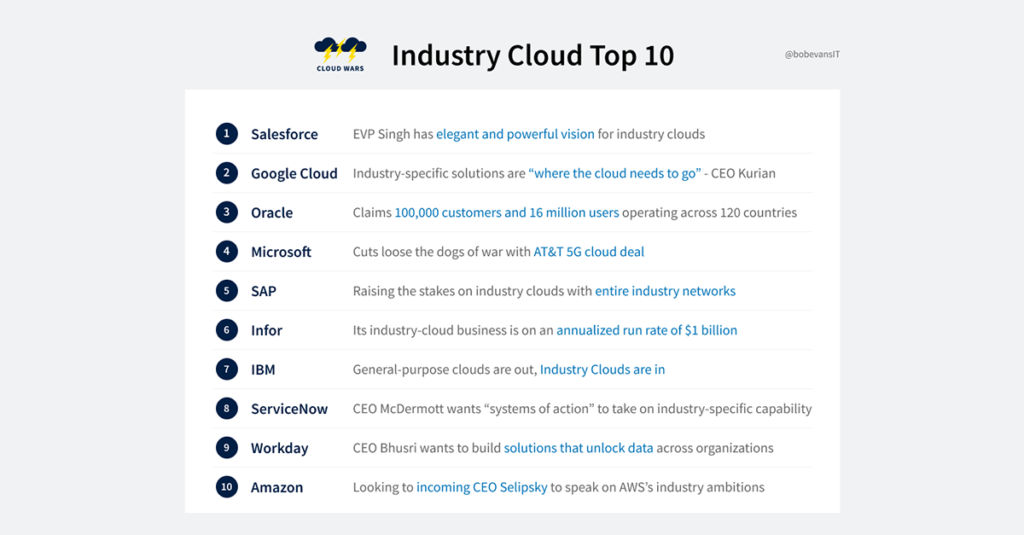 Due in large part to its February 2020 acquisition of industry-solutions specialist Vlocity for $1.33 billion, Salesforce reported that for its fiscal Q2 ended July 31, its Industry Cloud revenue rose 58%. According to my calculations, that means Salesforce’s red-hot industries business reached almost $800 million in revenue in its fiscal Q2 and put Salesforce’s industry-cloud business on an annualized revenue run rate of almost $3.2 billion. For more on that, please see Salesforce Industry Cloud Revenue Soars 58% to $790 Million.

While most of the big cloud providers do not disclose their industry-cloud revenue, I have no doubt that Salesforce’s $3.2 billion run rate is at least 2X higher than anyone else in the Industry Cloud Top 10.

And therein lies the opportunity for the world’s two largest vendors of broad-based enterprise applications: SAP and Oracle.

Here’s where SAP and Oracle have a chance to cut into Salesforce’s dominance in the fast-growing industry-specific apps business, which I believe will be the hottest segment in the entire cloud industry:

What SAP and Oracle must do

But the opportunity described above for SAP and Oracle will materialize if and only if those two companies aggressively and unconditionally accelerate their development of these new crossover apps across ERP, HCM and CRM.

So some advice for SAP and Oracle: don’t ease into it, don’t “pace yourself to the market,” don’t say that your sales teams aren’t up to speed to take on new products.

Or, if you do choose to fall back on any of those excuses, then be prepared to see Salesforce continue to dominate the highly strategic and booming market for industry-specific solutions juiced up with advanced LOB capabilities.

What CIOs Should Say to Boards of Directors | Sadin on Digital

Disclosure: at the time of this writing, Oracle, SAP and Salesforce were all clients of Cloud Wars Media.