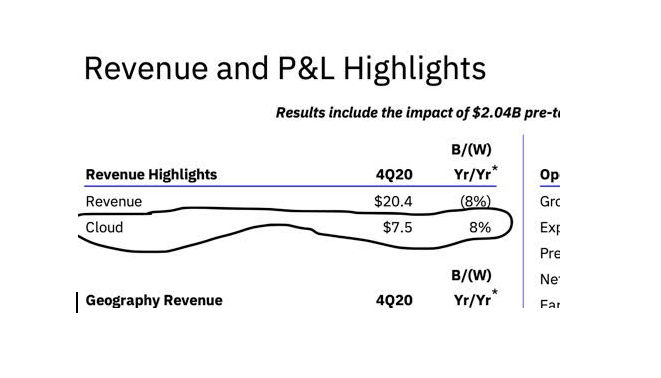 While Microsoft and Amazon are likely to report Q4 cloud-revenue growth rates of 30% or more, and while red-hot Google Cloud could come in at 40% or above, IBM last week said the growth rate for its cloud business plummeted in Q4 to 8%.

And in the wickedly competitive Cloud Wars, 8% growth means you’re falling behind the leaders—rapidly.

IBM did its level best to stay quiet about that 8% cloud growth rate for Q4—and understandably so—as neither CEO Arvind Krishna nor CFO James Kavanaugh cited it during the unusually long earnings call (88 minutes) during which they dished out an exhaustive list of other numbers.

This is not a new issue for IBM, and I’ve taken no joy in highlighting its struggles over the past year since it finally replaced former CEO Ginni Rometty with Krishna, who took over as CEO in early April of 2020:

IBM’s press release for its Q4 results included a fuzzy version of the 8% number:

“Total cloud revenue of $7.5 billion, up 10 percent (up 8 percent adjusting for divested businesses and currency)”.

A disturbing trend across 2020

But in the collection of financial charts that always accompanies IBM’s earnings releases, IBM spelled out its anemic cloud growth in slide 18. Here’s a screenshot of that slide, and I’ve circled the relevant line item in the upper-left quadrant: 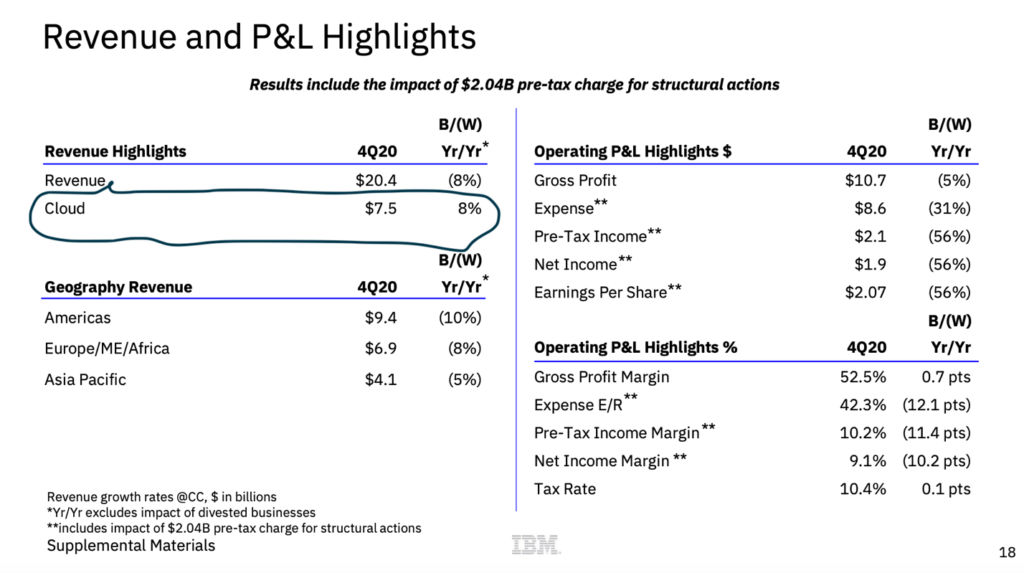 I was quite surprised that none of the financial analysts asked Krishna or Kavanaugh about that stunning decline, which represents an alarming trend for the growth rate of IBM cloud revenue over the past 4 quarters:

Hey, I understand the concept of “seasonality” and that some quarters are better than others, and I know that the incorporation of Red Hat numbers into IBM’s results caused some gyrations.

But no amount of rationalizing can make anyone with a clear head feel good about Q4 cloud growth of 8%.

By comparison, Microsoft just reported that for the same calendar Q4 (its fiscal Q2), its commercial-cloud revenue jumped 32% to $16.7 billion, with Azure revenue soaring 48% in constant currency.

Throughout the IBM Q4 earnings call, Krishna and Kavanaugh frequently cited “challenging” conditions among IBM’s customer base, and no doubt IBM’s  customers have faced and continue to face challenges reverberating from the year of the pandemic.

But doesn’t every other cloud vendor face the same issues with its customers and prospects? Yes they do.

And has any other major cloud vendor reported revenue growth of 8%?

So while Krishna and Kavanaugh have clearly been working passionately to try to address IBM’s growth problem—or, more accurately, its low-growth problem—it is simply baffling to see a company of IBM’s stature report Q4 cloud growth of 8%.

“The elephant in the room”

During the call, one analyst did indeed mention, quite literally, “the elephant in the room,” although he did not refer specifically to the anemic 8% Q4 cloud growth rate.

Analyst Toni Sacconaghi of AllianceBernstein raised a multilayered question about IBM’s troubling trends in its Q4 results. While Sacconaghi rambles a bit in his question, it does ultimately get to the heart of the core challenge for IBM: “How do you know that there isn’t something more sinister afoot here?”

Here’s the core of Sacconaghi’s question: “If I just kind of stand back from the results this quarter, typically, your revenues are up $3.4 billion from Q3 to Q4. That’s the average of your last three years, and there’s very little movement off of that average.

“This year, it was $2.8 billion. So at least in my eyes, it looks significantly worse. And I understand there are some issues around transaction processing. I understand year-over-year comps, but this is a sequential change, which seems to be notably below trend. And I hear your assurances around the current spending environment,” Sacconaghi said.

“So I guess the elephant in the room is, how do you know that there isn’t something more sinister afoot here? That there is an accelerated migration to the cloud that IBM is not participating in?

“Or particularly some of your software offerings in Cloud & Cognitive are not as competitive as you might think, and that’s ultimately what’s being reflected here.

“And I guess to that end, Arvind, maybe you can directly address why the confidence in mid-single-digit growth in 2022? Because it sounds like at constant currency, IBM is going to be flattish or maybe slightly down in 2021.”

Particularly in light of Microsoft’s 32% growth rate for its overall commercial cloud, and its 48% pop for Azure.

Lots of explanations but little growth

Krishna then took a shot at the elephant in the room called out by Sacconaghi, and the impact was not much better.

As I’ve said before, I think Krishna is working valiantly to fix an awful situation left to him by predecessor Rometty, who allowed IBM to treat the cloud as a peripheral business for far too long—an interesting peripheral, to be sure, but hardly something to be put at the center of the company.

And the repercussions of those delays—years and years of half-hearted efforts as the giant company lost its ability to keep up with the savagely competitive demands of the cloud marketplace—are what Krishna is now trying to overcome.

In today’s market, you can’t be “kind of” a cloud company. It is all fine and dandy for Krishna to say that IBM’s future is built around its hybrid cloud platform and AI.

But as long as the company drags along with it big and bloated and declining and distracting businesses from its storied past with declining relevance to IBM’s future, Krishna’s struggles will continue.

Because as IBM tries to regroup and grow, its competitors are surging—and they’re not the types to leave some easy pickings for IBM to grab as it rebuilds for the future.

And just in case IBM hasn’t noticed, the future is now.