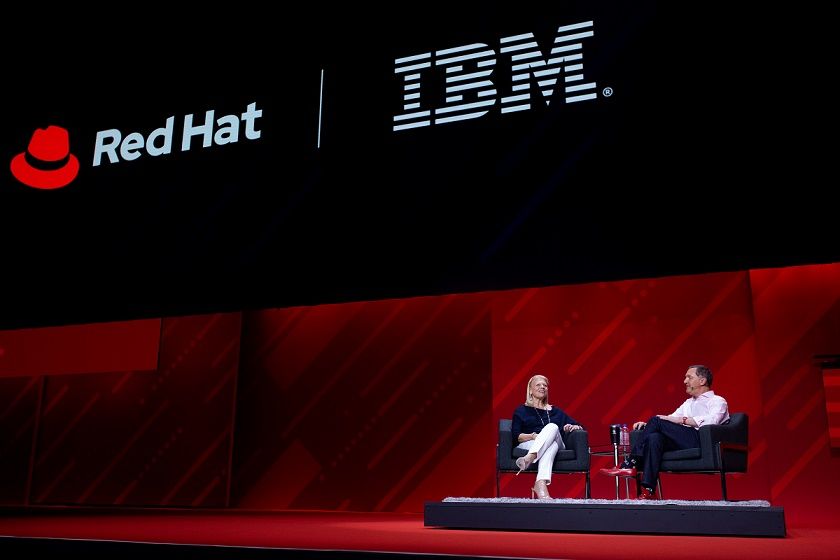 A few months ago, in a piece headlined IBM’s $19-Billion Cloud Business: Where Did the Growth Go?, I pulled together some numbers revealing that the slowest-growth cloud business in the Cloud Wars Top 10 is clearly IBM’s.

That piece also touched on the high hopes—the extremely high hopes—IBM is pinning on its $33-billion acquisition of Red Hat and on Red Hat’s ability to provide focus and momentum for IBM’s otherwise massive but moribund cloud business.

As IBM prepares to release Q3 results next week on Oct. 15, it’s worthwhile to take another look at the current status of IBM’s cloud business and the much-needed boost it expects to get from the infusion of Red Hat’s revenue.

As I wrote in the above-referenced piece on July 18:

First, let’s look at IBM’s quarter-by-quarter cloud revenue starting seven quarters ago when things looked so promising as its cloud revenue for Q4 2017 exceeded that of both Microsoft ($5.3 billion) and Amazon ($5.1 billion). And yes, of course, Q4 is the biggest quarter every year for IBM, so seasonality definitely plays a part, but look at the overall pattern across these last 7 quarters:

From another angle, here’s the trailing 12-month cloud revenue provided by IBM during each of those 7 quarters:

Beyond the Numbers: Can Red Hat Change IBM’s Narrative?

Clearly, the infusion of close to $1 billion in Red Hat revenue for Q3 will in itself be a game-changer for IBM’s cloud business. But of even greater importance over the longer term will be the manner in which IBM seeks to redefine—or perhaps just define—its cloud business around Red Hat.

As someone who’s studied IBM’s cloud business closely, I can tell you that IBM publicly breaks those results out in two different segments. First is IBM’s “as a services” business, which accounts for close to $12 billion of that 12-month total of $19.5 billion. Second is what I call its “cloud conversion” business, which accounts for about $7.5 billion.

But what’s in IBM’s $12-billion “as a services” business? It’s very hard to tell. There’s a public-cloud IaaS segment that trails far behind market leaders. There are some SaaS products that the company rarely identifies. And there’s a PaaS business that is equally nondescript.

Somebody’s buying something that adds up to $12 billion in cloud revenue. Why doesn’t IBM talk about that in ways that capture the interest and imagination of business leaders eager to move to the cloud?

And then there’s the other part of the cloud business, which IBM describes in boilerplate language but never discusses in terms that businesspeople can understand, evaluate and be intrigued by. Focused on private clouds, it’s said to be a business that offers hardware, software and consulting to help turn legacy environments into cloud or cloud-compatible environments.

Seems to me that’s a pretty powerful capability in today’s business world where digital transformation’s the top priority for CEOs. So why doesn’t IBM ever talk about it?

The $33-billion bet is that Red Hat will flesh out IBM’s ability to tell a compelling and comprehensive cloud story, one that pulls all of these vague capabilities into the context of Red Hat’s hybrid cloud and multicloud expertise.

On Tuesday’s earnings call, it will be fascinating to hear how IBM pulls those threads together. With its remarkable technology expertise, customer relationships, and brand equity, IBM has the potential to become a major force in the cloud.

Will it turn that potential into reality?

IBM Sales Leader: “Every Discussion Is About Cloud”