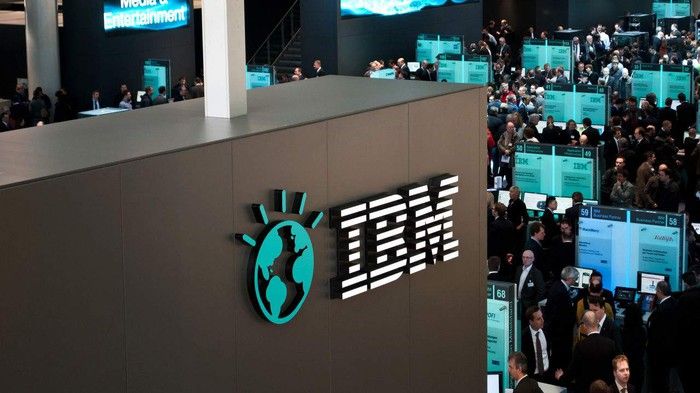 The IBM Q1 earnings announcement yesterday reveals that while IBM’s cloud business almost reached $20 billion in revenue for the 12 months ending March 31, its growth rate is lagging significantly behind those of all of IBM’s major cloud competitors.

IBM has clearly established itself as a major player in the Cloud Wars with cloud revenue of $19.5 billion for the 12 months ended March 31.

But as the appetite for cloud services and technology booms among large and mid-sized businesses—as well as in the public sector—the rate of growth for IBM’s cloud business indicates the company is simply not maintaining its share of the cloud market. Some of IBM’s primary competitors are growing at double or even quadruple its growth performance.

Here are the specific details about IBM’s cloud growth as listed on slide 24 of the presentation it released yesterday:

For Q1, total cloud revenue was up only 7% in GAAP numbers, or up 12% going by constant currency.

And for the trailing 12 months ended March 31, even the more-impressive constant-currency number indicates that IBM’s cloud revenue growth rate was just 12%.

For a company undergoing a major transformation as IBM is, 12% revenue growth can be seen as quite impressive, particularly as compared to the performance of most of IBM’s other businesses.

But relative to the recent growth rates of almost 50% from rivals Microsoft and Amazon, those 12% figures from IBM pale in comparison.

How IBM Can Stay Competitive

In light of that decelerating growth rate, IBM’s ability to hold the #5 spot in the Cloud Wars Top 10 rankings will require it to rack up more big customer wins like these recent ones:

Business customers today are looking for cloud providers with a wide range of capabilities. Because those businesses want to spend less time and money integrating sprawling globs of enterprise technology, and instead focus more on driving new revenue and delivering great customer experiences.

That’s been a huge advantage for Microsoft, Amazon and others. We’re also seeing the emergence of Accenture, with its powerful infrastructure-services and applications-services capabilities, jump into the Cloud Wars Top 10 based on cloud-revenue growth of 23% in 2018—almost double that of IBM.

To get a sense of the growth rates of the other major cloud players, here’s a table we recently compiled as part of an analysis called The Top 10 Cloud Vendors by Revenue: Splitting a $120-Billion Pie: 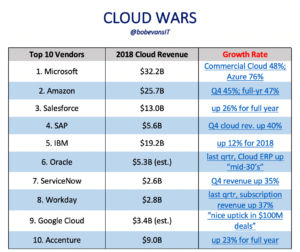