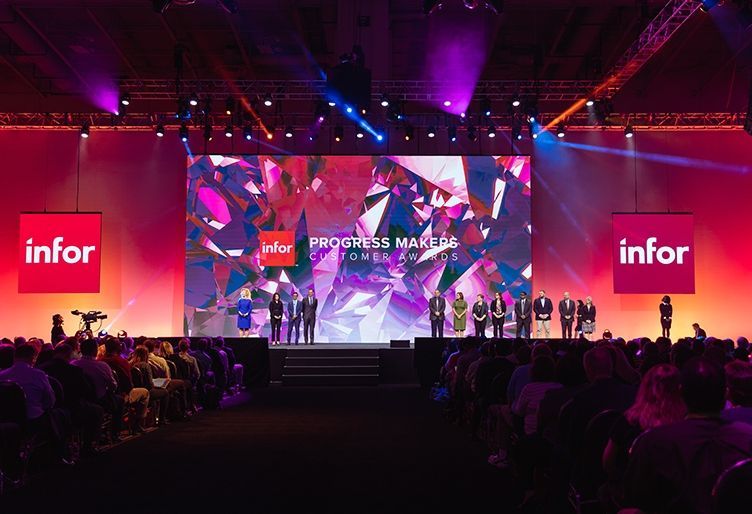 With an industry-cloud run rate of $1 billion, low-key and privately held Infor appears to have leapfrogged industry giants Microsoft, Oracle, and SAP in the red-hot market for industry-specific cloud solutions.

On my weekly Cloud Wars Top 10 rankings, Microsoft is #1, SAP is #5, and Oracle is #6. Infor has not made the Cloud Wars Top 10, but when I launch my new Industry Cloud Top 10 later this month, Infor has a very good chance of debuting at #2.

Salesforce will almost certainly be #1 on that forthcoming Industry Cloud Top 10 on the strength of its $2 billion annual run rate for its industry-clouds business, which we outlined in Has Salesforce Beaten Microsoft, Oracle & SAP to #1 in Industry Clouds?

For Salesforce, such a strong showing is to be expected—after all, it’s the world’s largest cloud-applications provider and will likely generate more than $16 billion in SaaS revenue in calendar 2021 out of total revenue that’ll be in the range of $25 billion.

But for Infor, it’s a very different story.

I’d suspect that very few people outside Infor had such great expectations for this privately held company founded in 2002 and built largely on acquisitions. Over the past decade or so, Infor has invested about $5 billion building new cloud apps, making those acquisitions and converting all of those apps to the same code base, said company president Kevin Samuelson, who’s been with Infor since its founding.

Those efforts have helped push Infor into the industry-solutions spotlight right as these specialized applications and connectors are beginning to become enormously popular.

I spoke with Samuelson and CTO and president of products Soma Somasundaram recently to learn more about Infor’s industry-cloud strategy and capabilities, and you can catch the entire interview (video or audio) in the latest episode of our Cloud Wars Live podcast.

Here’s how Samuelson laid out the company’s fast-growing industry-cloud progress in the context of Infor’s overall business.

“Of our total revenue of $3.5 billion, industry clouds account for about $1 billion of run rate for us and we’ve been able to build that in about four or five years so it’s grown at quite a rapid rate,” Samuelson said.

“And it’s pretty interesting to look at the composition of that. As we’ve gone deeply into industries with our multi-tenant cloud products, we’ve also kept our existing on-premises customers in mind, and have given them a really nice pathway to move to the cloud that is a lot simpler than alternatives.

“So about a third of what we have moved to the cloud has been our existing on-premises customers, and that’s growing quite a bit. Another third of that $1 billion run rate is net new, and then about a third is current cloud customers who are saying they also need things tailored for their industry like warehouse management and supply chain and asset management,” Samuelson said.

“So we continue to expand that suite and cross-sell, and the result is a nice cross-section of building new business, upgrading existing customers, and continuing to expand relationships.”

Somasundaram said that while it might be tempting to try to take shortcuts with industry solutions, that will certainly lead to bad outcomes.

“If you really think about industry specificity, if you want to go after a select set of industries with what we call ‘last-mile capabilities,’ then that means last-mile functionality and last-mile content. And to be able to do that, the solutions have to be architected in a way that it only addresses adjacent set of industries.

“You cannot be solving a problem in the aerospace and defense and the next day you’re using the same code base to solve a problem in a dairy company because they are very different businesses,” Somasundaram said.

“So our whole strategy was let’s build pillars—we don’t call them ERP anymore—we call them cloud suites. A suite that’s got a hub, which only serves adjacent industries that have commonality, and we have four different hubs that really drive what we are trying to do with last-mile functionality.”

Somasundaram called it a “unique approach in the market” that “does create an extra burden on us to optimize these engines and build all that specific functionality in there.”

But, harkening back to the bad old days of enterprise software, he said the heavy lifting Infor has taken on “seems to be much more effective than having 90,000 switches you have to tweak to get anything to work for any particular industry.”

“We’re not trying to go after everything”

“To Soma’s point, we don’t have one product that we’re trying to solve everything with. Instead, we have four platforms and each serves a very select number of industries, and we’re not trying to go after everything. And by going deeply into specific industry with specific products, that will help our customers get to the future that you’re talking about.”

And Somasundaram, who’s been designing enterprise software applications for 30 years, added this take on traditional ERP and described how it simply can’t meet the rapidly emerging world of digital business and automation everywhere.

“Like you described, Bob, the notion of ERP serving a certain purpose in the last 20 years, that was fine. But today in the digital world, people want to consume the business service in a fashion that may not necessarily be through the user experience—through the screen. If I have automation in my plant, in my factory, robots are communicating with the system in that scenario. If I have Alexa for business at my desk, I’m communicating with Alexa to get information from the ERP system,” he said.

“So in that scenario, we actually had the opportunity to build this literally from scratch, and we spent $5 billion to build these solutions. Obviously, we stole our own design ideas from the acquisitions we had from before, but these solutions were built industry-specific, built with a high degree of API-centricity, and a high degree of data-centricity. So if you have a data-rich architecture and an APA-rich architecture, then these services can be consumed in a fashion that you couldn’t do in the traditional application. So it’s both industry specific as well as modern technology that we feel is what needs to be there to drive digital transformation.”

Infor will face serious competition in the vertical apps space

Clearly Infor feels that everything it’s been doing for the past decade has led up to this moment when industry-specific solutions have become the hottest trend in the entire cloud industry. And in these early days, it looks to me that Infor has a good chance to find itself in the top half of my forthcoming Industry Cloud Top 10 rankings, perhaps as high up as #2.

Will Infor be able to continue to thrive in that rarified air? The competition will be savage, and no doubt Infor will need to be prepared to continue investing massively to keep up with the likes of Google and Microsoft and SAP and Oracle, all of which have declared extremely serious intentions to being leaders in industry-specific solutions.

But according to Samuelson, that’s not a problem.

“Yeah, there was a time when that was more of a struggle,” he said.

“But as you may know, we’re private and extraordinarily well-funded [by Koch Industries], and that’s actually given us an advantage on that front.

“Obviously, a lot of companies say, ‘We’re long-term focused, we’re your partner for the long-term, but we’ve got to make this number this quarter.’

“But we have a very, very different approach. We are truly thinking in decades, and that’s the way our owners think, and so when we talk with customers on that front, there’s a lot of certainty around direction, and then that shows up in how we deal with them as well.”

As I noted, you can check out the entire interview with Samuelson and Somasundaram via our Cloud Wars Live podcast channel.