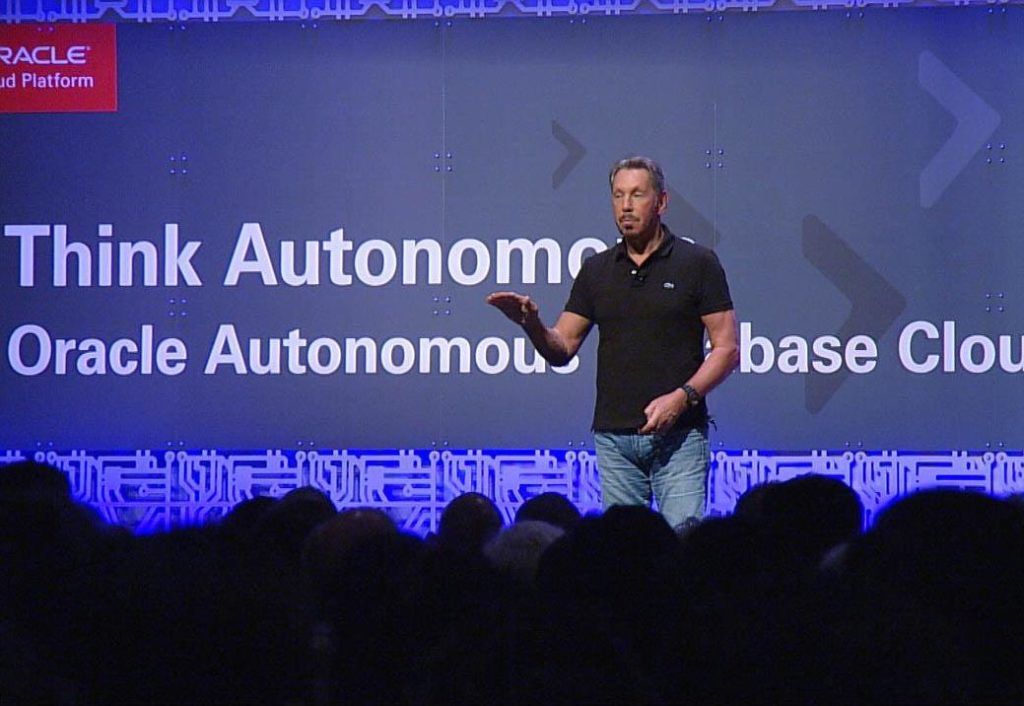 Editor’s Note: We updated this article on March 16, 2020 to address some inaccuracies in Larry Ellison’s description of Oracle’s engagement with customer DTCC.

Fusing his high-demand Autonomous Database with his tiny cloud-infrastructure business, Larry Ellison is reshaping traditional cloud boundaries to meet the new demands of the digital economy and become a contender in the massive IaaS market.

While Ellison’s talked some about this gambit in the past, it came fully to life in yesterday’s quarterly earnings call as he laid out in detail some customer wins that are direct results of his database-IaaS fusion strategy.

And while the size of these deals certainly won’t strike fear into the hearts of market leaders Microsoft, Amazon and Google, they indicate a very clear and sharp upward trajectory for Oracle’s fledgling infrastructure business.

On the earnings call, Ellison, as has become his custom, focused his opening remarks on two high-growth products that he says will determine Oracle’s fate: Fusion ERP Cloud applications (revenue up 38% for Q3) and Autonomous Database (revenue up more than 150% but off a tiny base).

And as he began to discuss Autonomous Database, his overview of the market made it perfectly clear that Ellison is positioning it not as part of the PaaS layer of the cloud where databases have always been slotted, but as part of Oracle’s “Gen 2” infrastructure.

“I’m going to give you a little more detail about our infrastructure business, being driven by our new Autonomous Database,” Ellison said in making that new fused-positioning expressly clear.

Ellison then outlined several new infrastructure customers who centered their decisions on Autonomous Database for deployments that “we think are strategic and very important to give you a sense of how much momentum our infrastructure business is beginning to pick up.”

[Note as of March 16, 2020: In the original version of this story, Ellison outlined some work that Oracle is doing with a customer called Depository Trust Clearing Corp., or DTCC. However, DTCC disputed the details of what Ellison said, and issued this statement to Cloud Wars (and likely many other media properties) about the work it’s doing with Oracle]: “On March 12, 2020, Oracle inaccurately reported during its Q3 earnings call that DTCC was migrating a “multi-terabyte data warehouse” from Amazon Web Services to Oracle’s public cloud service. DTCC uses AWS to support a variety of business functions, and DTCC does not have any plans to move applications from AWS to Oracle. DTCC employs a number of Oracle products, including Oracle Autonomous Database and Oracle Analytics Cloud, which support DTCC’s corporate HR and Finance functions. Currently, DTCC’s core clearance and settlement services for the U.S. securities markets are not delivered through any public cloud.”

Asked for a reaction to the statement from DTCC, Oracle issued this comment: “Any interpretation of Larry’s comments to imply DTCC’s core clearance and settlement services for the U.S. Securities markets are delivered through any public cloud is inaccurate.” [End of 3/16/20 update.]

Autonomous Database is “Serverless and Elastic”

Again, the big guys in the cloud-infrastructure business have landed many such deals far more frequently than Oracle has, and often for much higher revenue figures. But the key here is that Oracle is offering customers a new approach led by a high-demand product (Autonomous Database) that’s a natural follow-on for hundreds of thousands of businesses currently running traditional Oracle databases.

And as Ellison described a couple unique features of his Gen 2 cloud infrastructure with the cloud-native Autonomous Database, it became harder and harder to separate where the database part ends and the infrastructure part begins. That is, no doubt, precisely what Ellison is intending.

“But another thing that people may not know about Autonomous Database is that it’s both serverless and elastic,” Ellison said on the call.

“When your application isn’t running on the Oracle Public Cloud, you don’t pay for any CPUs—you’ve got no CPUs dedicated to you and you’re not paying for servers. That is not true of Amazon databases. If you have Redshift, you pay for the right Redshift processors. If you have their MySQL implementation, you pay for those processors.

“But we’re not only serverless, we’re instantaneously elastic,” Ellison said. “So if you suddenly need to go from two servers or two cores to 20 cores, we do that instantaneously, while the database is still running. And then when you no longer need the 20 cores, we automatically go back to the two.

“So it literally is the promise of the cloud.”