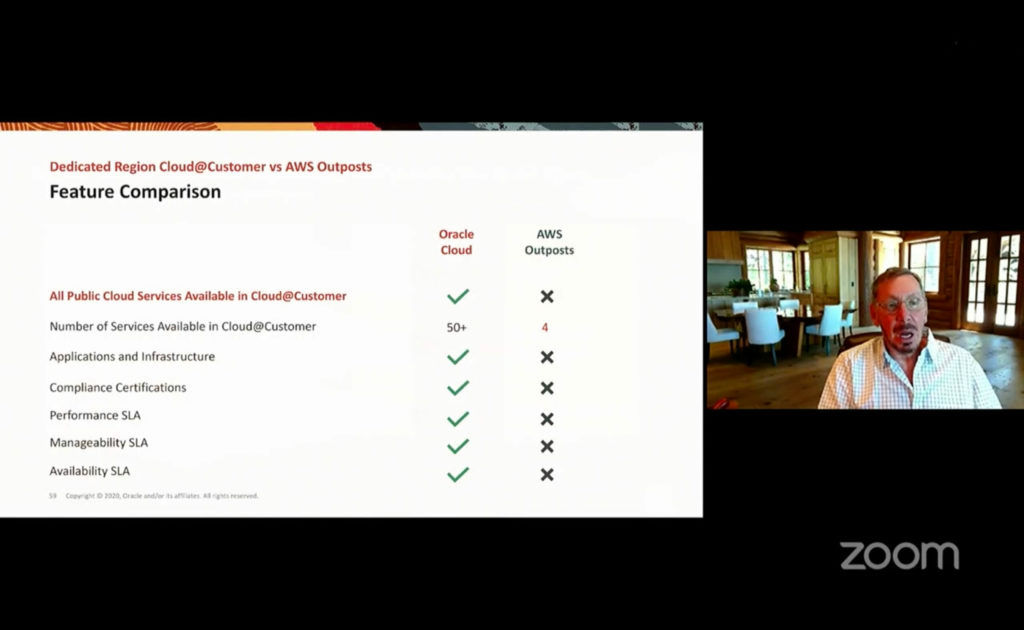 In an hour-long Zoom presentation (gotta showcase those great customers, right?), Ellison delivered one of his most compelling and comprehensive narratives about Oracle’s prospects for moving from the extreme fringe in the IaaS wars to the heart of the battle with Amazon, Microsoft and Google Cloud.

Among the key points made by Ellison:

For the first time, Ellison offered a clear definition of what Oracle means by the  “Gen2” label it has long used but rarely defined. In the past, it was a vague reference to being newer or better or cooler, and that vagueness gave it something of a pink-unicorn feel. But in his online Oracle Live presentation last week, Ellison swept aside the vagueness and stated unequivocally that Gen2 = autonomous.

Early in the hour-long presentation, Ellison said, “Before we announce the new products, I’d like to just update you on the progress Oracle’s Generation 2 Cloud is making in the marketplace. Now, we call our cloud a second-generation cloud because of one thing: because of autonomous services. The difference between a Generation 1 Cloud and a Generation 2 Cloud are these autonomous services.” And that for Oracle, that means not just its Autonomous Database but also all of Oracle’s growing arsenal of autonomous cloud technologies and services: infrastructure, database, Linux and more.

As Ellison hammered home on more than one occasion, “No one else offers anything like this.”

Customers are buying faster than Oracle is talking.

In the past several years, Oracle has had the unfortunate tendency to describe great, sweeping and marvelous cloud plans and visions without, in fact, having the goods to back up the talk. But with its new autonomous services and [email protected] approach, Oracle has been able to bring customers aboard early and increasingly often with real, high-impact cloud solutions. The list of early-adopter customers is impressive and I’ll share that in a future piece.

True to his nature of assiduously avoiding the pack, Ellison spoke convincingly about Oracle’s strategy for allowing customers to deploy a unified set of technologies and solutions across the worlds of cloud (in all its variations) and on-premises.

Every other tech company calls this “hybrid computing,” with IBM leading the way. (IBM seems to have a mandate that its executives must use the term “hybrid” at least two times in every sentence they utter in any public commentary. CFO Jim Kavanaugh recently dropped the H-bomb 25 times in just the *opening remarks* on an earnings call.) But I digress: my point is that Ellison is looking to redefine this massive and highly strategic category by rigorously avoiding the term “hybrid” and instead focusing on the massive business value customers can unlock by having a consistent, secure and high-performance set of IT tools across cloud and on-premises.

Ellison pointedly highlighted what he described as gaping disparities between Oracle’s cloud technologies and capabilities and those of AWS. While some or perhaps most or maybe even all of these claims made by Ellison are true, please bear in mind that AWS has an enormous lead on Oracle in the IaaS market, and that it would require a Herculean effort by Oracle to approach even half of the IaaS market share AWS has.

For years, Ellison has been proclaiming that Oracle will catch and overcome AWS, and for years, no such thing has come close to happening. BUT—for the first time, it seems like Oracle has achieved superiority over AWS with the focus on autonomous, and with the visionary new [email protected] services Ellison revealed. For full details on those announcements, please check out my analysis from late last week: Larry Ellison’s Miracle: Oracle Becomes Big-Time Cloud Infrastructure Player. Below, I’ll share the specific claims of superiority made by Ellison.

To me, this was a startling and welcome change from Ellison. When he’s announced new products in the past, customer stories were jammed in at the end or omitted completely. But last week, Ellison spoke about customer deployments at the very top of his remarks. That could be just a coincidence, but I’m pretty sure it’s a reflection of a new focus on customers and customer successes for Oracle.

If Oracle can fulfill this early promise and become a true high-impact competitor in the IaaS market, business customers will benefit greatly from that heightened and intensified level of competition. Meanwhile, other cloud vendors will in turn create better and more-innovative solutions. So in that context, I’m rooting for Oracle to fulfill that early promise and deliver the goods for customers.

But even if that happens—and I believe it will—we don’t live in a steady-state world. Amazon and Microsoft and Google will all continue to deliver their own startling and powerful innovations. Again, all of that is great for customers.

Oracle’s off to a great new start here—but the Cloud Wars are both a sprint and a marathon. So Ellison and company need to get lots and lots of customers committed to its Gen2/autonomous approach quickly, and it needs to begin cooking up its next wave of innovations even as Dedicated Region [email protected] is just rolling into production.

Such is life—and leadership—in the Cloud Wars here in mid-2020.