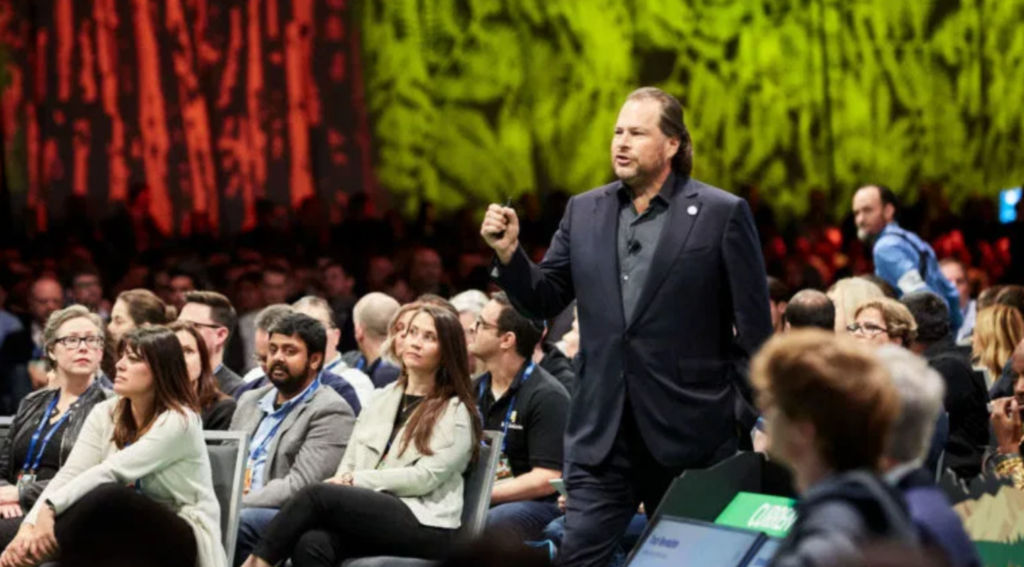 The striking thing about Salesforce’s remarkable overnight transformation from glitzy software company to gritty global procurement powerhouse is that, under Marc Benioff’s leadership, it doesn’t really seem so extraordinary.

Well into his third decade of running one of the most innovative and successful software companies the world has ever known, Benioff somehow finds ways to reinvent—redefine? reorient?—himself and his company with a speed and grace that few if any CEOs in any industry can match.

Look at the outstanding efforts and initiatives of the major tech companies to battle COVID-19 and the nightmare it’s unleashed across the globe: high-value applications and solutions made available to all at no charge, donations of money and cloud services, efforts to help researchers optimize data analytics, and much more.

All excellent ideas, all valuable, all making a big impact.

But Benioff did all of that as well, and then leapt completely of his company’s category and started procuring and, with partners, transporting 50 million pieces of personal protective equipment (PPE). The undertaking was surely not easy. But Salesforce and Benioff made it look that way because they got it done rapidly, without a hitch and with results that have immediate and lasting impact.

“For us, this story began quite a few weeks ago when we saw our employees in different Asian countries start to go through this. And then it started to head toward us here in the United States,” Benioff said during a recent appearance on Jim Cramer’s Mad Money show.

“I got a call from Sam Hawgood, the chairman of Univeristy of California, San Francisco saying he saw an extremely fast run on his PPE—personal protective equipment—in the hospital already. It turned out a lot of people were coming to the emergency room to get checked if they had the virus or not. And he asked if I could try to figure out a way just to get more PPE in the city.”

Got that? The head of a major university hospital sees an imminent and frightening shortage of gowns and masks and gloves so he calls… the head of a CRM software company??

No doubt Hawgood knows Benioff better than most people do. Benioff and his wife have, over the past decade, donated more than $135 million to that UCSF medical center.

But notice that Hawgood didn’t ask Benioff for funding—rather, he asked the software-company CEO for desperately needed protective clothing for heroic frontline healthcare workers. Turns out that was a brilliant request.

“Well, that turned into a relationship that we had with Alibaba and their CEO, Daniel Zhang, who helped work with us so closely and we’ve brought now more than 50 million pieces of PPE from throughout the entire world and we’re working to bring more PPE in even this week,” Benioff told Cramer.

Here’s another example. Six months ago, Benioff triggered a high-scale and high-stakes debate across the globe on the controversial subject of “a new capitalism” for which Benioff—a multibillionaire—is a passionate advocate.

The core idea is that companies need to extend the same level of focus and commitment they give to shareholders to a much broader set of “stakeholders.” Appearing on Cramer’s Mad Money show in mid-October, Benioff described his new-capitalism vision this way:

We need a new capitalism that’s more fair, more equitable—a more-sustainable capitalism. A capitalism that values not just all shareholders but also all stakeholders… Look—shareholders are important, and we’ve had a great shareholder return at Salesforce—I heard you mention it earlier—3500% since I was first here [at the NYSE] in 2004. But I had a great stakeholder return too in that same period: we’ve given over $300 million for grants, 4 million hours of volunteerism, 40,000 nonprofits and NGOs running on our service for free. And we’re a net-zero company—we’ll be fully renewable by 2025…

Doing the remarkable, and making it look simple

Now, clearly, Benioff’s views on capitalism and many other social issues are not for everybody. I can understand the skepticism of people who might say, “Well, if my net worth were somewhere north of $5 billion, then I could afford to promote a ‘new capitalism,’ too—but it seems the ‘old capitalism’ has worked pretty darn well for him.’”

Fair point. But beyond the specific branch of philosophy or style of politics that Benioff embraces and for which he advocates, Benioff’s current ascendancy remains extraordinary. He gets noticed and has a huge following; he has a vision and corresponding ideas that few can match; he’s a legendarily powerful communicator/evangelist who inspires people; and—per the delivery of 50 million pieces of PPE in a ridiculously short period of time—Marc Benioff gets things done.

Everybody likes trees, right? Marc Benioff pulled a lot of rival factions together to agree to plant a trillion trees. Fanciful or realistic, that goal is something few others would initiate—but Benioff led the charge and said 300 companies have joined in.

On March 25, as the world was reeling from the COVID-19 crisis, Benioff publicly stated there would be no significant layoffs at Salesforce for 90 days, and called on other CEOs to make the same pledge.

As a CEO, Benioff’s achieved something across Salesforce’s 20-year history that no other CEO of any American company in any industry has ever matched: growing at least 20% per year for 20 straight years. Check it out:

Another element of the Benioff mystique has to do with an ancient and long-forgotten ritual wherein tens of thousands of people would gather—physically and in-person!—in San Francisco or Orlando or Las Vegas at the annual customer events put on by big tech companies.

If the biggest tech companies in the world could attract 50,000 attendees, that was an unbelievable success.

But Benioff’s Dreamforce event completely dwarfed all other events by a factor of 3X or even 5X. Anywhere from 125,000 to 140,000 people would enthusiastically swarm San Francisco for several days of Salesforce immersion.

How does Salesforce pull that off? Is it overly simplistic to say that Benioff and his company simply connect more effectively with people?

I’m not sure—and here in ShutdownLand, who knows if we’ll ever have such “F2F” (remember that term??) again to try to figure out the answer.

But I am sure that Marc Benioff has hit a time in his life and in his career when he’s begun to transcend categories, industries and labels.

For Marc Benioff, this is a time of extraordinary ascendancy. Love him or not, agree with him or not, we all can learn some things from him about leadership and vision and commitment during extremely challenging times.

Tech’s Coronavirus Response: What Salesforce, ServiceNow and Workday Are Doing