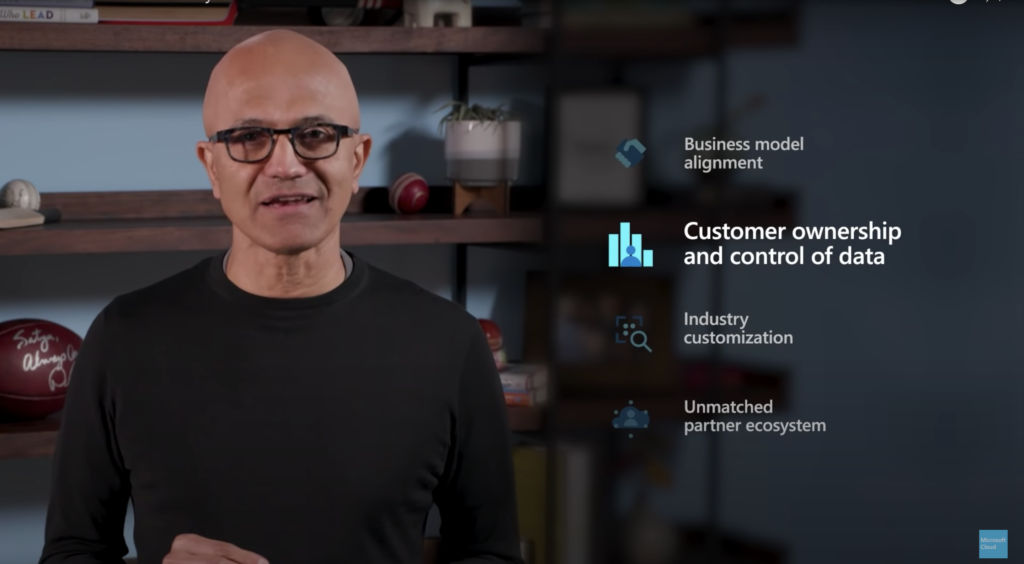 Looking to sharply differentiate Microsoft from Amazon in the cloud, Microsoft CEO Satya Nadella clearly alluded to Amazon’s AWS when he said cloud providers that compete with customers in other businesses will never be able to establish the essential bond of trust with those customers.

(In my weekly Cloud Wars Top 10 rankings, Microsoft has been #1 for more than 2 years, while Amazon has held the #2 spot for that same span of time.)

In a video announcing a major expansion of Microsoft’s industry-cloud business, Nadella said, “There are 4 key principles that guide our approach: business-model alignment; customer ownership and control of data; industry customization; and unmatched partner ecosystem.

“First, trusted business-model alignment. No customer wants to be dependent on a provider that sells them technology on one end and competes with them on the other,” Nadella said, clearly referencing Amazon’s aggressive moves into retail and other industries.

Just to clarify: Nadella did not say the name “Amazon” or “AWS”—but it is perfectly clear that he was talking about that parent company and its cloud-computing business unit.

As we’ve noted before multiple times, that stance by parent company Amazon puts its AWS cloud unit in a tough competitive spot: as Nadella said, “No customer wants to be dependent on a provider that sells them technology on one end and competes with them on the other.”

That raises two interesting points involving the brilliant Amazon executive Andy Jassy, who drove AWS to phenomenal success for many years before being promoted last month to CEO of parent company Amazon as founder Jeff Bezos relinquished the CEO role and moved to executive chairman.

Nadella took it a step further in outlining the second of his four key principles: that “customer data belongs to our customers, not to us.” No doubt, the folks at AWS can go to great lengths in describing how customer data is totally inaccessible to AWS employees.

But the issue is not so much one of technology as of, as Nadella described it, “trusted business-model alignment.” In the minds of many people—perhaps most people—the linkage between AWS and Amazon is so tight that it’s almost impossible to comprehend the boundaries between the two.

And that was my primary point about Jassy and his ill-advised attempt to chalk up these widespread concerns about competitive overlap as “folklore.”

In his video announcement last week, Nadella continued to describe the differences between his company and one he did not name but is clearly Amazon.

“Microsoft will always be a trusted advisor, co-innovator and partner,” Nadella said.

“Second, customer data belongs to our customers, not to us. We work with organizations to help them harness the data to build the predictive and analytical power required for their own competitive advantage.”

That’s a very smart move by Nadella, and it’s going to be a very difficult dilemma for Jassy to overcome, particularly as he’s now CEO of the entire Amazon empire.

As you consider the different approaches of these two companies, it’s important to bear in mind the almost unfathomable financial power wielded by each: