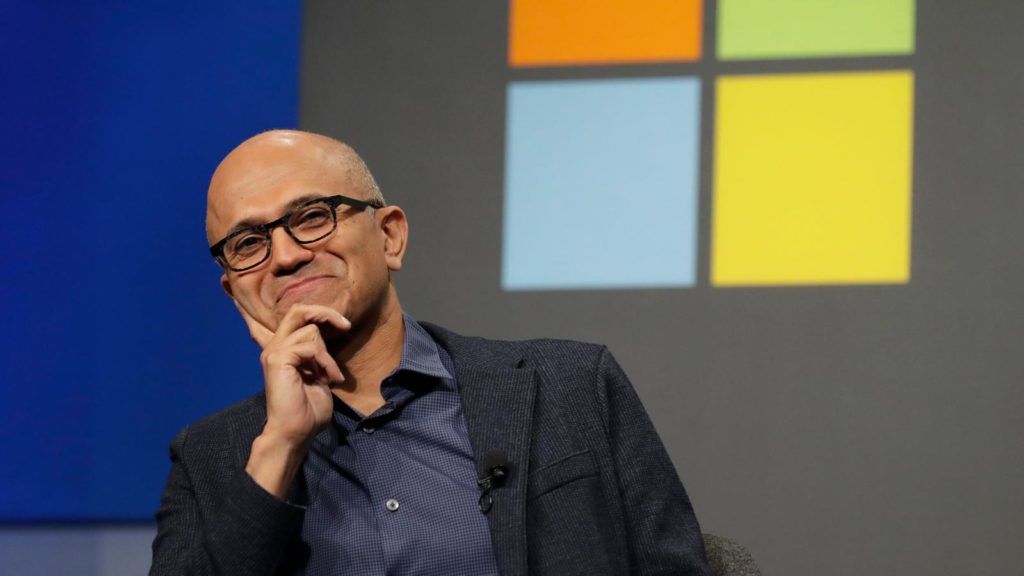 While Satya Nadella will almost certainly do an outstanding job in his additional new role as chairman at Microsoft, I believe that high-fallutin’ new title will always be completely overshadowed by the extraordinary record Nadella has put together as CEO of Microsoft.

When Nadella was named CEO of Microsoft on Feb. 4, 2014, Microsoft’s market cap was about $311 billion, the cloud was a poorly understood and peripheral element in corporate strategy and the company was widely regarded as a once-great institution whose best days were in the rear-view mirror.

It’s big focus was on “devices and consumer” segments as underscored in this comment from then-CEO Steve Ballmer in the press release announcing Microsoft’s financial results for the 3 months ended Dec. 31, 2013:

“Our Commercial segment continues to outpace the overall market, and our Devices and Consumer segment had a great holiday quarter,” said Steve Ballmer, chief executive officer at Microsoft. “The investments we are making in devices and services that deliver high-value experiences to our customers, and the work we are doing with our partners, are driving strong results and positioning us well for long-term growth.”

My eyes aren’t as sharp as they used to be, but I read that paragraph several times and I’ll be darned if I could spot the word “cloud” in there even once. No, the big play was “Devices and Consumer,” which for those 3 months generated half of the company’s overall revenue: $11.91 billion out of a total of $24.5 billion.

But today, seven years of Nadella’s firm and inspiring leadership has made Microsoft not only the world’s largest and most-influential cloud provider but also the world’s second most-valuable company with a market cap of $1.954 trillion, second only to Apple’s $2.177 trillion.

The contrast in how Microsoft presented itself to the world in the days immediately preceding Nadella’s elevation to CEO and the way the company does so today reveals part of the astonishing overhaul the low-key but charismatic Nadella has engineered.

This slide shows how Microsoft presented its cloud revenue within its FY14 Q2 results on January 23, 2014, which was the very last quarterly financial report before Nadella was named CEO on Feb. 4, 2014. 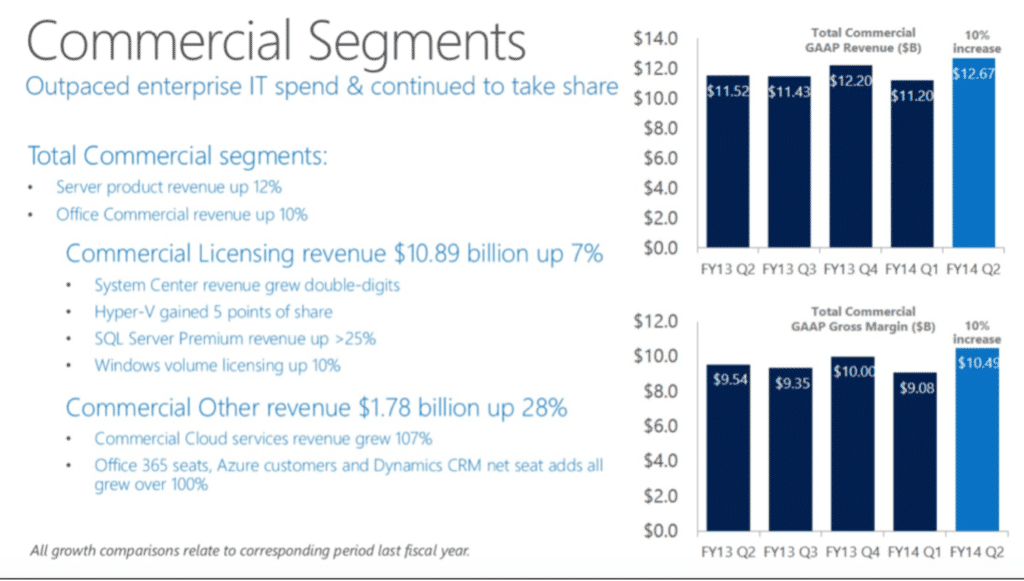 It is hard to believe that just seven years ago, the commercial-cloud business was relegated to “Other” status. Today, Microsoft always leads off its quarterly earnings-results press release with highlights from its enterprise cloud business, which now accounts for more than 42% of Microsoft’s total revenue. For FY21 Q3 ended March 31, Microsoft posted companywide revenue of $41.7 billion with commercial cloud generating $17.7 billion of that total.

Contrast that slide above with this slide from Microsoft’s earnings report ending March 31, 2021: 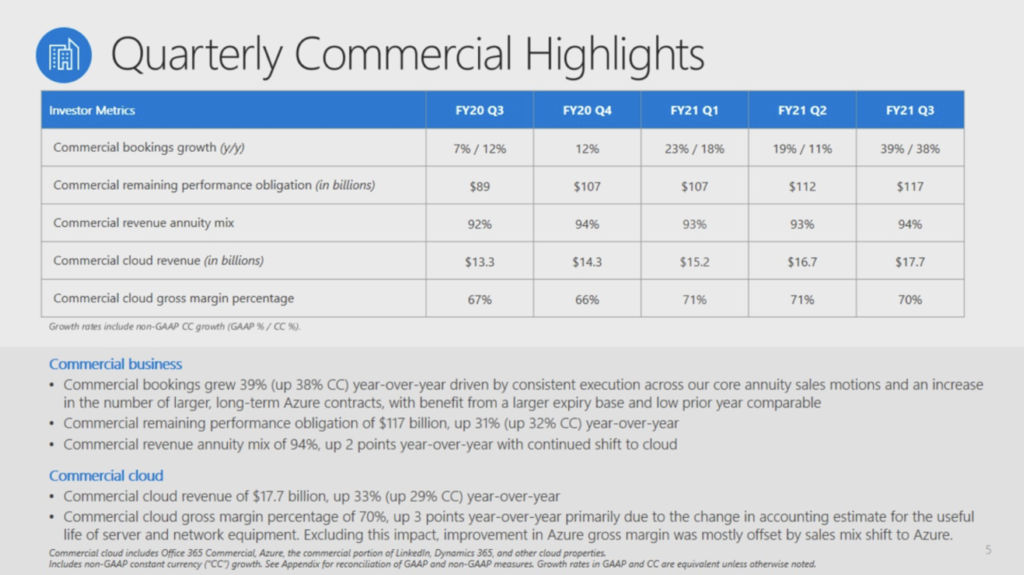 So as Nadella is given the additional title of chairman, here are my top 5 reasons for why I believe he has established himself as the pre-eminent CEO in not only the tech industry but indeed the entire world.

While always speaking respectfully and even admiringly of the CEO he replaced—Steve Ballmer—Nadella immediately set out to get Microsoft out of the mobile-phone business and more deeply and strategically into the cloud. Nadella also triggered a handful of sweeping reorganizations that turned development and marketing teams that often competed against each other into customer-focused units with zero tolerance for the outmoded “slug it out internally” culture Ballmer had nurtured.

While Ballmer’s legendary high-intensity rants and occasional ravings could be highly entertaining or at least diverting, Nadella fostered a very different atmosphere and behavior built around an intense focus on customers: their challenges, their opportunities, their problems, their needs, their aspirations and their dreams. He relentlessly tinkered with org structures until all vestiges of the corrosive in-fighting had been purged, he actively encouraged and often insisted that top leaders reimagine the nature of their engagements with customers and partners and he used innovative language to showcase the companies values and priorities.

A few quick examples: “tech intensity” became his rallying cry for customers to not only buy software and services from Microsoft but also to begin aggressively building their own software; “do more” became the core of the company’s mission statement and its aspirational mindset; and “reasoning over” data became part of the language that he and Microsoft use to describe the tangible value of AI. Massive innovation in business models within the company led to Microsoft’s global sales teams selling unique Azure-based solutions created not by internal teams but by partners and even customers—an approach that was unthinkable in the recent past.

3. Championing the Decade of the Developer.

It was Nadella who, about 2 years ago, said that for the very first time, non-tech companies were hiring more developers than the tech companies were. And his passionate evangelizing of the “tech intensity” theme noted above was predicated on the need for businesses of every size in every industry to make developers indispensable parts of product development, marketing sales, strategy, customer service and more. Look at this excerpt from Nadella’s keynote speech at the Microsoft Build event for developers late last month:

In a digital-first company, the developer workflow influences how the entire company works. Fusion teams of pro developers and domain experts will integrate all functions and all disciplines. For example, students and teachers, data analysts and scientists have all seen rapid growth on GitHub. And of course, we’re experiencing massive technological and societal shifts, which will create new and lasting opportunities for all of you. As the physical and digital worlds converge, every organization, small or large, in every industry and every country, will require a more ubiquitous and decentralized compute power. Large AI models are becoming platforms, creating ambient intelligence around us. The balance between consumption and creation is changing. More and more people are creating something new and magical every day, and they’re growing communities who want to discover, explore and build on their creations.

Since Nadella became CEO, Microsoft has made 85 acquisitions, an average of about one per month. Among the biggest of those are:

Each of these has marked a pivotal new direction for Microsoft and has helped kick open new and large addressable markets for a company that needs to add more than $4 billion of new revenue each quarter to reach a 10% growth rate.

And if I’ve missed any whoppers in the gaming sector, that’s only because I don’t cover that space and wouldn’t know a Frogger from a PacMan.

5. You are what your record says you are.

So, in Nadella’s 7 years as CEO, Microsoft’s:

But maybe the number that reveals just how superbly Nadella has positioned Microsoft for future growth and profitability is his perspective on how the tech sector’s percentage of GDP will double over the next decade. Here’s how he made that case at last month’s Build event:

Just think about the world in 2030. Tech as a percentage of total GDP will double from 5 to 10%. But the most notable is what will happen to the other 90%. Digital transformation that was projected to happen over the next 10 years is happening today. As computing becomes embedded in every aspect of our lives, there will be no longer such thing a thing as the tech sector. The world will be transformed through tech intensity at scale. Every organization will need to not only adopt the latest technology, but more importantly, build their own unique digital technology, or be left behind.

And as the world is “transformed through tech intensity at scale,” CEO Satya Nadella has Microsoft positioned to continue being one of the most influential, valuable, successful and innovative companies the world has ever seen.