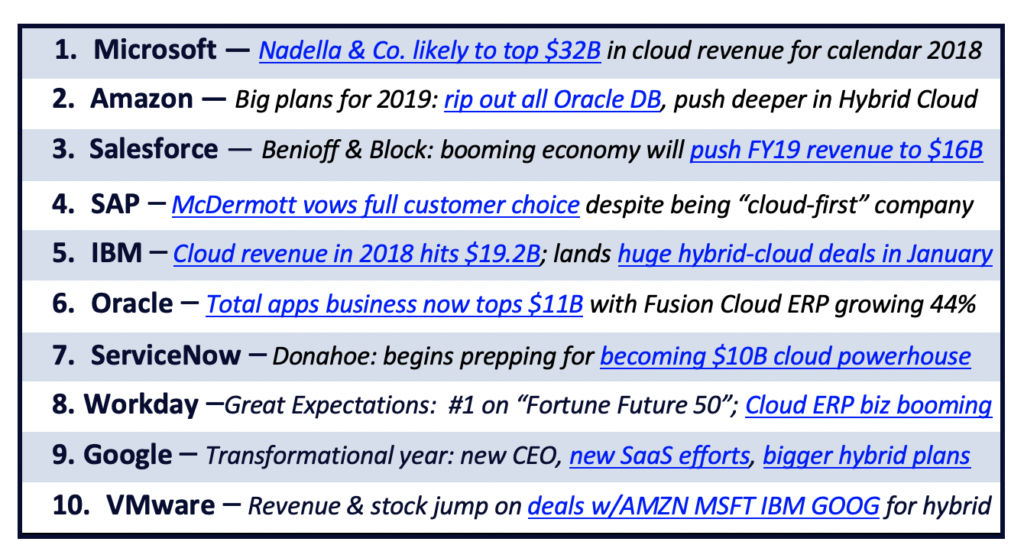 While Amazon remains the undisputed king of public cloud IaaS, Microsoft’s broader set of across-the-cloud services pushed Microsoft’s commercial-cloud revenue for 2018 to $32.2 billion and have given it an insurmountable lead as the world’s largest cloud provider over Amazon, whose numbers come out tomorrow.

To match the Microsoft 2018 cloud revenue total of $32.2 billion for calendar 2018, Amazon’s AWS cloud unit would have to triple its year-ago Q4 revenue of $5.11 billion—and that’s simply beyond the realm of possibility, regardless of how powerful the Amazon and AWS brands have become in the marketplace and how successful their efforts have been.

A more likely scenario when Amazon posts its Q4 and full-year results tomorrow will be AWS revenue growth of about 45%, which would make its current Q4 revenue $7.41 billion and give it a calendar-2018 total of $25.6 billion. 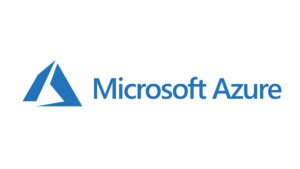 So why do these very big numbers from Microsoft and Amazon matter? Well, other than giving me a chance to chirp about my prediction 8 weeks ago that the Microsoft 2018 cloud revenue total for the year would come in at $32.3 billion, the numbers truly matter because they underscore a few fundamental points: 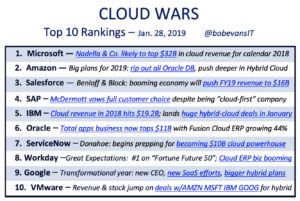 For Microsoft, the power of a full range of cloud computing services is becoming increasingly relevant because, as CEO Satya Nadella said yesterday in the Q&A portion of Microsoft’s earnings call, “every company is becoming a digital company.”

And to successfully undertake and complete that transformation, those companies need to address and overhaul everything they do—from how they find, hire and groom great talent; to how they design, build and market dynamic new products; to how they close financial books more quickly to allow them to allocate resources more intelligently and productively; to how they engage with customers in ways that are driven by the buyers instead of the sellers; and how they become creators of software code rather than just purchasers of it.

Microsoft’s deep expertise across not only IaaS—the portion of the cloud that Amazon essentially created and in which it has performed so brilliantly—but also the higher-value categories of PaaS and SaaS plus edge computing, AI and IoT gives customers a full set of tools, knowledge and capabilities to address most of those challenges in a unified fashion.

Over the next day or two, we’ll dig a little more deeply into the details of the Microsoft 2018 cloud revenue numbers and those posted by AWS, but I felt it was vital today to address how these two remarkable companies continue to power a revolution in not only cloud technology but also in the world of business.