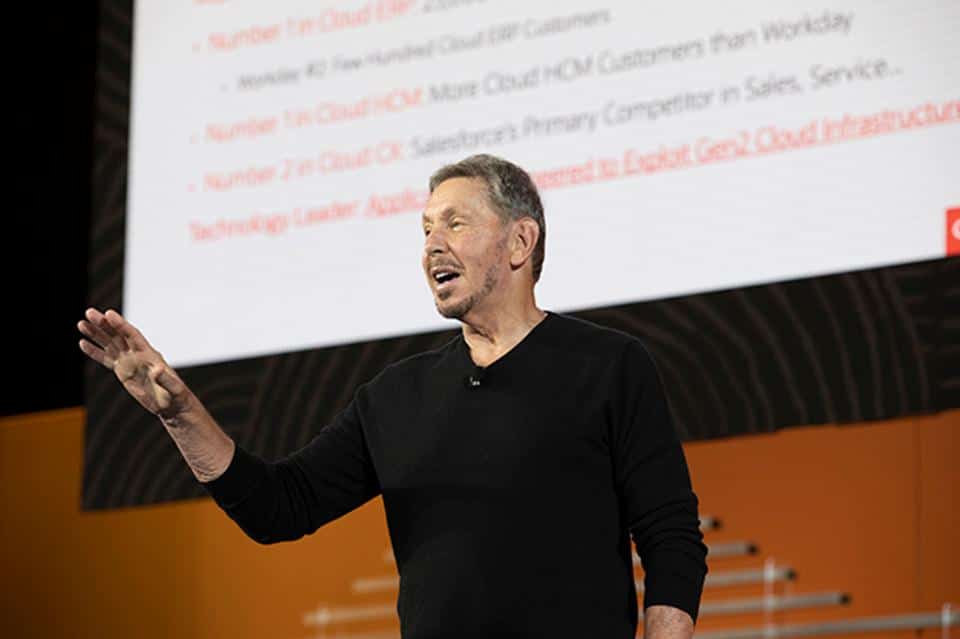 Belittling the capabilities of peers that are beating Oracle in some key markets, Oracle chairman Larry Ellison is playing a high-risk game of trashing the competition to mask his own company’s lengthy and low-growth transition to the cloud.

While Ellison’s taunts—a blend of truth, half-truths, and flat-out fantasies—can be entertaining and a little catchy, Oracle’s competitors have all begun playing a very different game. For them, the objective is no longer to out-insult your rivals, but instead to dazzle and delight your customers.

In Oracle’s fiscal Q2 earnings call last week, 4 points rang home loud and clear to me from the company I’m currently ranking at #5 on my Cloud Wars Top 10 list.

Regarding competitors and Oracle’s ultimate success, there’s a whole lotta “if’s” and “eventually’s” in that list above.

And the only hard-and-fast fact among the 4 is that Oracle’s overall growth for the quarter ended Nov. 30 rose by 1%.

I freely admit that I’m a huge fan of Larry Ellison. I believe he will be forever regarded as one of the greatest business leaders and strategists of our time.

But not even Larry Ellison has invented a time machine. And if, as Ellison hinted at during the earnings call, it’s going to take 18 or 24 months for significant revenue from Autonomous Database to show up, then in the interim he’d better create a new way to frame and articulate Oracle’s value. (You can see more on that at Hello, IBM and Microsoft: Larry Ellison’s Big Plans for Oracle Autonomous Database.)

The approach of “my competitors are terrible” has run its course. It is no longer freezing the market until Oracle can catch up. And don’t take my word for it—just look at the ongoing cloud-growth rates from SAP and Workday, both of which are higher than Oracle’s. For more on that, please check out these articles.

ORACLE vs. SAP vs. WORKDAY

So from the earnings call, I’ve compiled two lists. First, we’ll look at some of the increasingly irrelevant criticisms Ellison leveled at SAP and Workday. And second, we’ll turn to some of the very positive possibilities that could become reality for Oracle in the near future.

And it is that second list—the stuff about why Oracle’s products and services are uniquely qualified to drive significant new innovation and value for customers—that Ellison and Oracle should focus on exclusively in the future. Because, as I noted above, that’s the approach customers are looking for. Most of the Cloud Wars Top 10 vendors have jumped on it already.

Ellison’s insistence on playing the insult-your-competitor game is not only old-fashioned, it also obscures Ellison’s ability to hammer home the unique and high-value attributes of the Oracle Cloud and Cloud ERP and the potentially runaway Autonomous Database.

Okay, enough of that silliness.

And as promised, here are some high-value comments from Ellison about the ways in which he sees his two most-strategic products—Cloud ERP and Autonomous Database—grabbing the attention of customers.

As colorful and combative as Ellison is, and as wildly successful as he’s been, what he and Oracle are facing today with extremely capable, fast-moving and customer-obsessed competitors is unlike any of the competitive battles he’s fought through in the past.

It’s time, Larry, to stop trashing the competitors and to start celebrating the customers.