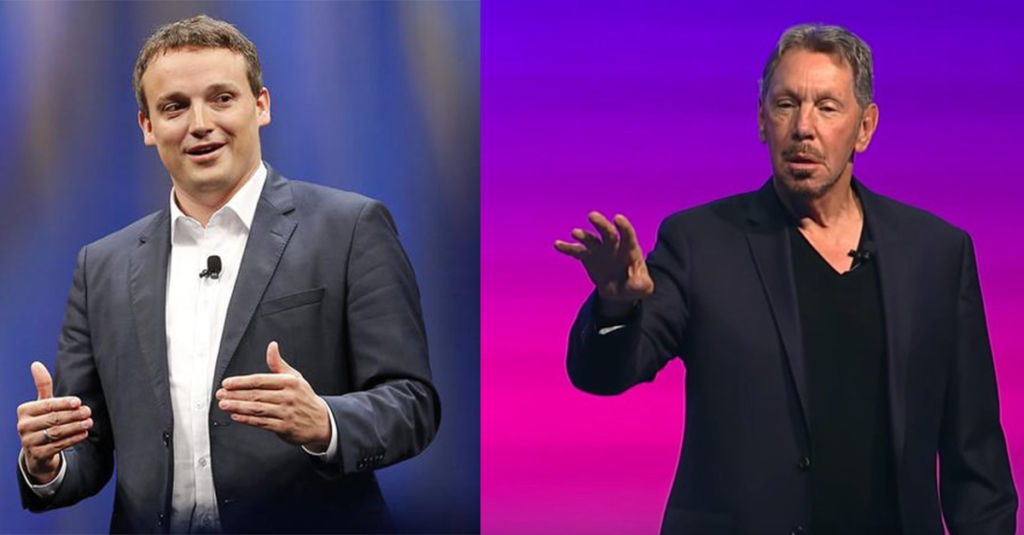 That big lead for SAP would take on particular significance as Oracle founder Larry Ellison has been hammering SAP in public comments recently and has completely dismissed SAP’s ability to compete with Oracle’s fast-growing Fusion ERP business.

But wait a minute!

Let’s take a look at this wickedly competitive market from the point of view of each company.

SAP would say that its cloud ERP business is far larger than Oracle’s, by somewhere between 50% and almost 70%. SAP would also say that with its new “Rise with SAP” program, customer demand for SAP’s cloud ERP products will grow dramatically in the months and quarters to come.

As CEO Klein said during the April 22 earnings call:

Our performance clearly confirms our strategy to drive business transformation in the cloud. In Q1, we saw competitive wins in our entire cloud business, clearly winning in a growing market with strong order-entry growth across our portfolio. All of that came on top of our rapidly growing Business Technology Platform that is serving as key foundation for a modular, integrated and innovative application landscape for our customers and partners. RISE is already a game-changer two months after market introduction, the best offering in the market for business transformation. Altogether, on the back of strong new cloud business and an uptick on renewals, current cloud backlog growth reaccelerated sharply… This was one of the strongest quarters in the history of SAP.

So in SAP’s version of who’s the big dog in cloud ERP annualized revenue run rates, the numbers would play out this way: SAP between $6 billion and $6.7 billion, and Oracle $4 billion. Which would mean game, set and match to SAP.

As noted above, chairman and CTO Ellison has been relentlessly critical of SAP’s cloud efforts overall, and particularly what he says is its failure to rewrite its ERP applications specifically for the cloud. In that context, Oracle is eager to have the world believe that when Klein says “SAP’s cloud ERP revenue run rate is now approaching 6 billion euros,” only a sliver of that total—about $1 billion—is from the sale of authentic modern cloud ERP in the form of S/4HANA Cloud.

The remaining $5 billion or so comes from the hosting of traditional SAP apps on the public cloud, which Oracle says does not deserve to be classified as true cloud revenue. And by Oracle’s logic, that would mean that the comparison of cloud ERP annualized revenue run rates would look like this: Oracle $4 billion (for Fusion ERP, NetSuite ERP, and Fusion HCM), and SAP $1 billion (for S/4HANA Cloud). And if you accept this version of what’s going on, then that means Oracle is not only the clearly dominant player in cloud ERP, but also the innovation leader in the field.

I think it is no coincidence that Klein decided to give—for what I believe is the very first time—at least a rough picture of SAP’s cloud ERP revenue during the April 22 earnings call.

And because there are sharply differing points of view being offered by these two companies, let me give you the precise wording from each company’s most-recent quarterly earnings reports so you can evaluate the relative positions.

First from Oracle, which released its fiscal-Q3 results on March 10:

On top of that significant cloud ERP revenue run rate, Klein also revealed on the earnings call that SAP’s backlog for cloud ERP was up 43%, which points to continued strong growth.

Now, it is possible—extremely unlikely, but possible—that Ellison and Klein will call each other up, agree to stop the sniping and agree that each company can define “cloud ERP” any dang way it wants to.

But since it’s more likely that the sun will rise in the west, we will continue to keep you up to date on the Cloud Wars’ very own King Kong versus Godzilla battles.

Disclosure: at the time of this writing, both SAP and Oracle were among the many clients of Cloud Wars Media LLC and/or Evans Strategic Communications LLC.