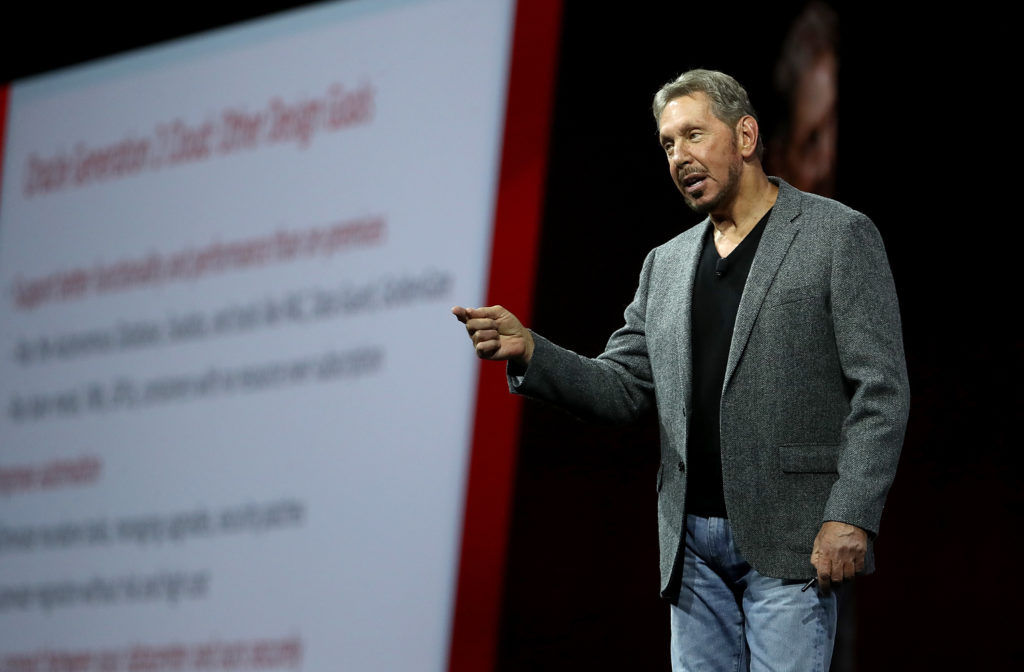 After a year of relentless hype about its Autonomous Database, Oracle yesterday said booming demand for the self-driving database was a huge factor behind the company’s blowout numbers for the final quarter of its fiscal year.

In just the 3 months ending May 31, Oracle customers and prospects ran 5,000 trials of the Autonomous Database, founder and chairman Larry Ellison said. And those types of trials are beginning to generate significant revenue.

“In Q4, we saw a surge in database license sales,” Ellison said to open his prepared remarks on the earnings call.

“We also saw very rapid growth in sales of those database options required to run our Autonomous Database. We continue to gain overall database market share as we migrate our database users to the cloud.”

Ellison described the widespread move by customers from trials to projects to major implementations—and, for Oracle, revenue.

“We’re seeing very, very rapid adoption,” Ellison emphasized as he described for the first time the customer adoption of Autonomous Database rather than simply describing its breakthrough capabilities.

Oracle CEO Safra Catz put some specific numbers around the impact Autonomous Database and its related options are having on the overall database business for the company. The bullish comments from the typically reserved Catz underscore the enthusiasm customers are feeling for the new self-patching and self-updating database.

“Technology license growth was up 19%, making it abundantly clear that customers are investing in the Oracle platform,” Catz said in her discussion of the company’s Q4 and full-year results. And the key database options necessary to run the Oracle Autonomous Database service grew 21%.

“I cannot stress enough the stability and growth of our base of customers. Quarter after quarter, our customers are maintaining and expanding this Oracle environment.”

Catz continued: “This popularity is largely because our products are capable of doing things others just can’t do, whether it’s security, performance, or scalability and in our cloud autonomous capabilities. As our customers adopt our technologies, whether via licenses or cloud services, our overall customer base is growing and that growth is starting to accelerate.”

Catz then brought up the company’s recent cloud partnership with Microsoft—a blockbuster agreement that I analyzed recently in Microsoft-Oracle Shocker: Customers Win as #1 and #6 Vendors Pair Up—and predicted it would become another growth engine for not only the new self-driving database but also the Oracle Cloud overall.

“In addition, the recent interconnect agreement with Microsoft will only help accelerate the transition from on premise database to the Autonomous Database service,” Catz said.

Later in the call, Ellison described how the company’s bullishness about the potential of the new database is being driven not only by sales forecasts from the field but also by the company’s ability to analyze how aggressively customers are using the Autonomous Database.

“We’re really optimistic about this business,” Ellison said. “And the optimism is not just due to Safra’s guidance, which is based on sales forecasts. The thing that I find fascinating are the consumption-data curves, which shows our consumption rate [by customers] is growing much faster than the sales team’s currently anticipating.

“To me, that’s just wonderfully encouraging. And hopefully this is the beginning of the trend.”

A Lingering Question About ADB

All of these numbers and commentary from Oracle reinforce in my mind a very big question about the Oracle Autonomous Database: if it’s so wonderful—and the results above indicate that lots of customers believe it is—then why haven’t other major database vendors begun offering competitive products?

Why aren’t we seeing Microsoft and IBM disclose roadmaps for their own self-repairing and self-securing databases? Do they not feel customers will be interested in such a product? Or is it that—as Ellison has claimed in the past—no other company can match what Oracle’s delivering?

Either way, for Oracle customers, the big value is that their entire organizations will benefit from the security features of the Autonomous Database, and will be able to redeploy DBAs to work on more-valuable projects because the new database handles the chores those DBAs formerly had to oversee.

One other critical point on this big win for Oracle: it means the company’s “Gen2” IaaS business is also picking up. Because the only way customers can get the Autonomous Database is by agreeing to have it run on Oracle’s Gen2 IaaS.

Ellison’s betting that customers will accept that bundle because of the unique features of the Autonomous Database, which as he put it in a press release announcing the Q4 results, “encrypts all your data, backs itself up, tunes itself, upgrades itself, and patches itself when a security threat is detected.

Indeed, the Cloud Wars will be much more interesting if Oracle can parlay its leadership position in the traditional database business into big success in cloud PaaS and IaaS.

For more on the Oracle Autonomous Database and the Oracle Cloud, please check out:

Oracle Cloud Driving “Fundamental Breakthroughs for Companies of All Sizes”