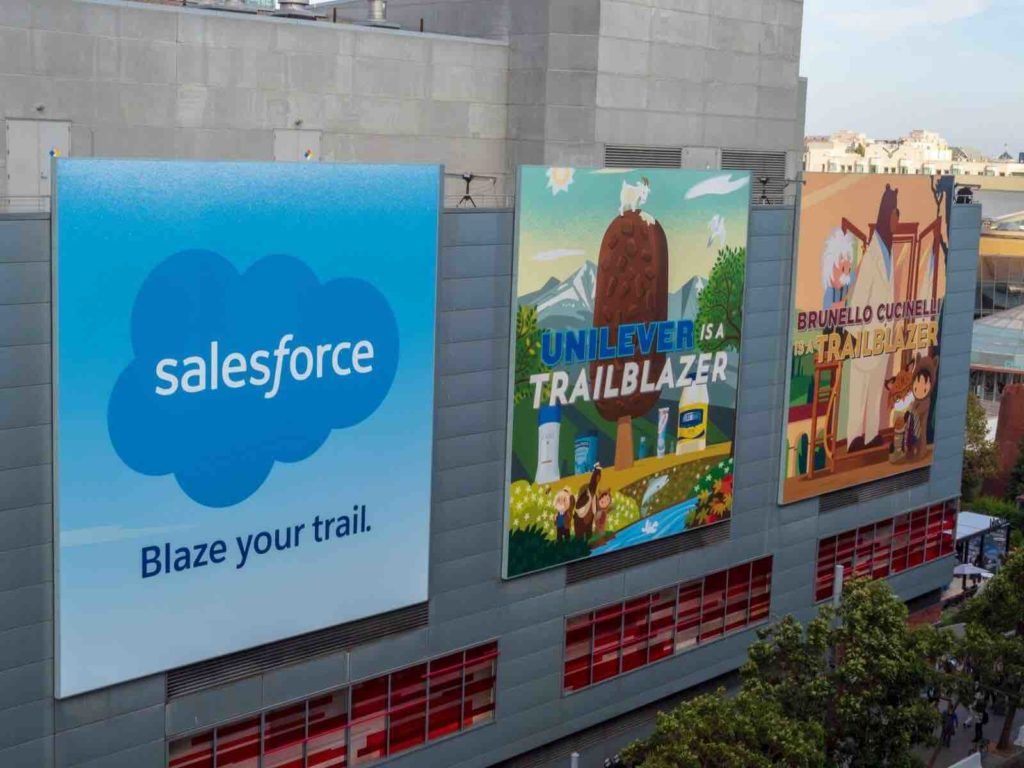 Salesforce’s annual revenue is surging toward $20 billion, its stock price is within a few bucks of its all-time high, and this week Marc Benioff is hosting 170,000 of his best friends at the annual Dreamforce extravaganza in San Francisco.

The company’s core businesses are booming. It’s just forged a powerful partnership with the #1 player in the Cloud Wars, Microsoft. It’s pushing out into new markets. And its leadership team is stronger than it’s ever been.

Winston Churchill said, “Success is not final, failure is not fatal: it is the courage to continue that counts.” And I believe that for Salesforce—#3 on the Cloud Wars Top 10—the first part of that momentous quotation is particularly timely and relevant: “success is not final.”

Every successful company faces constant challenges from without and within:

With Dreamforce about to open and the company preparing to release fiscal Q3 earnings results two weeks from today on Dec. 3, let’s take a look at what I believe are the 5 major challenges facing high-flying Salesforce. Also, for those wanting to dig a bit deeper into Salesforce—from its successes to the forces behind those 5 big challenges—I’ve assembled a “Recommended Reading” list of 17 Salesforce-specific news-analysis pieces we’ve posted here at Cloud Wars over the past several months.

No doubt, Salesforce’s revenue from its powerful CRM clouds is probably 10x or even 12x than SAP’s CRM revenue. But a year and a half ago, outgoing SAP CEO Bill McDermott made a very public commitment to the CRM business, based on the company’s creation of an extensive suite of CRM solutions both organic and acquired.

On top of that, SAP’s reinvigorated commitment to CRM includes the radical new approach of pairing traditional CRM data with ERP data—right in SAP’s wheelhouse—to yield greater insights and opportunities for customers. You can get a good sense of the challenge SAP’s presenting to Salesforce in Attention Salesforce: SAP CX Revenue Surges 75%, Key Exec Jumps Ship and also in Salesforce vs. SAP: Who Will Lead the Customer-Experience Revolution?.

About 5 weeks ago, I posted an intriguing piece (it’s become one of the 4 best-read pieces ever on Cloud Wars) called Will Salesforce Dump Oracle and Pick AWS? An Insider’s Perspective. The premise is that since Oracle, like SAP, lusts after Salesforce’s massive market share in CRM, Benioff might be willing to dump Oracle as its database supplier and go with AWS. After all, Amazon itself has spent the past few years doing just that. Jeff Bezos and Andy Jassy would no doubt be willing to offer Benioff phenomenal inducements to make the jump as well. (Recall that for more than 3 years Amazon was the preferred public-cloud infrastructure for Salesforce.)

Adding a bit of credibility to this speculative scenario is the fact that Salesforce last week jilted AWS by moving its massive Marketing Cloud to Microsoft Azure and agreeing to integrate Sales Cloud and Service Cloud with Microsoft Teams. So perhaps in a conciliatory approach to Amazon, Benioff might choose to announce at Dreamforce that it’s starting to migrate at least some of its databases from Oracle to AWS.

3: The Profound Changes in What “CRM” Means in Today’s Digital Economy.

SAP’s $8-billion acquisition of Qualtrics one year ago, driven by outgoing CEO Bill McDermott, shook the entire enterprise-apps marketplace and the CRM segment in particular. By adding first-hand customer-experience data to SAP’s unmatched masses of operational data, Qualtrics not only redefines the CRM space but also has the potential to do much the same for ERP and HCM.

Benioff promptly acknowledged Salesforce’s need to respond. In June of this year, he went into great detail on his fiscal Q1 earnings call about Salesforce’s New Strategy: All-In on ‘Customer 360,’ Powered by MuleSoft. The “360” thing was Benioff’s attempt to blunt the unprecedented range of coverage Qualtrics is delivering to SAP. Plus, Benioff used that same earnings call to announce that Salesforce was expanding its boundaries by jumping into the hot new “employee experience” category. That’s a direct response to the way in which SAP is using Qualtrics to revamp and re-energize its SuccessFactors HCM portfolio. You can read all about that in Attention Workday, SAP and Oracle: Is Salesforce Jumping into HCM?.

4: Can Salesforce Achieve Breakaway Momentum as a Platform?

Yes, it has Heroku and Force.com. But if Salesforce wants to scale not just its apps but its PaaS business into the stratosphere, it must become an even bigger and more-influential platform. Again, this is not a knock on what Salesforce has done to date—rather, it’s a reality-check that as the company surpasses $20 billion in annual revenue and wants to be seen as capable in PaaS as it is in SaaS, it’s got to hypercharge its platform business.

5: Marc Benioff’s Been Salesforce’s Heart and Soul for 21 Years—Will Running the Company Continue to Inspire Him?

I’ve seen no evidence that Benioff’s interest in running the company he founded in 1999 is waning, but 21 years is a long time. Particularly for someone like Benioff, who transcends the CEO role to become the animating force for the company and its psyche. He made Keith Block co-CEO about a year ago—very wise move—and loves to showcase his deep and talented set of direct reports on earnings calls, which is something very few other tech CEOs do.

But Benioff’s dreams are so big and his passions run so deep that I think it’s entirely natural to wonder if—regardless of how much he loves his company and how fully devoted to it he will always be—the company itself, and the tech industry as a whole, and the customers he talks about so passionately will combine to make him even more committed. Or whether Benioff might decide that after more than 20 years as nonstop CEO, and with his company hitting $20 billion in annual revenue in 2020, and with him and Salesforce having received every conceivable honor and accolade, it’s time for a new adventure.

I hope Marc Benioff stays at Salesforce for at least a few more years. The tech world would be much less interesting without him.

And please be sure to check out the extensive trove of Salesforce analysis below.

Amazon Jilted as Salesforce and Microsoft Pair Up for IaaS and Teams  (Nov. 15)

Hey Oracle: 3 Lessons from Salesforce on Talking about Customers (Aug. 29)

Salesforce vs. SAP: Who Will Lead the Customer-Experience Revolution? (Aug. 26)

How Microsoft, SAP and Adobe Plan to Revolutionize CRM and Rock Salesforce (March 29)

The SAP Qualtrics Effect: How Salesforce, Oracle and Workday Should Respond (March 12)

Disclosure: at the time of this writing, SAP, Oracle, and Microsoft were clients of Evans Strategic Communications LLC.