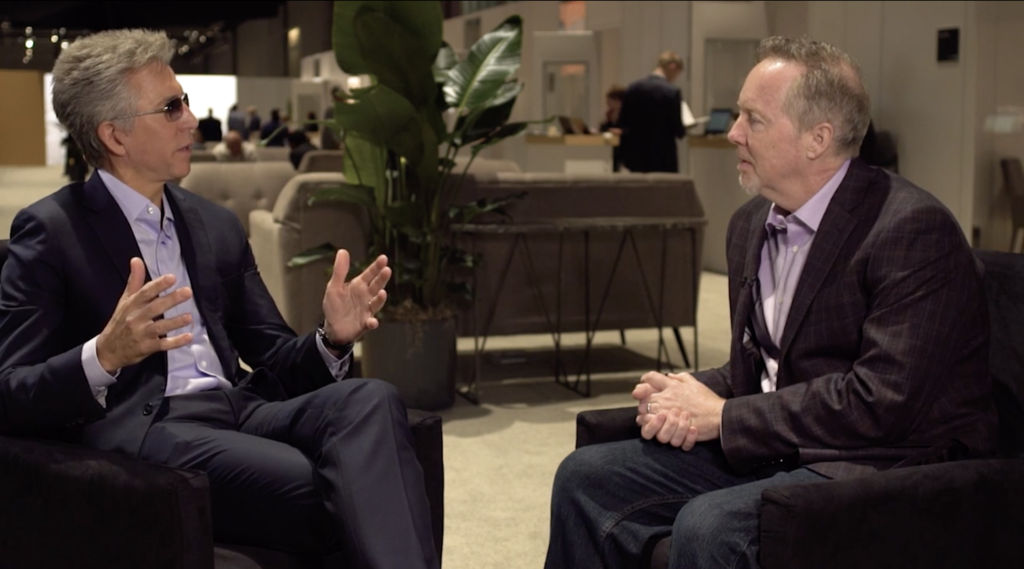 With more than 425,000 customers, the industry’s fastest-growing high-scale SaaS business, and the launch of a market-disrupting new category, SAP has completely transformed itself to meet the demands of the new digital age.

And CEO Bill McDermott told me last week that if the company remains very hungry and very humble, its best days are still ahead of it as SAP and Qualtrics usher in a new era called the Experience Economy.

In an exclusive interview during SAP’s big Sapphire event last week (which you can watch in full here), McDermott described the company’s sweeping transformation, its breakthrough acquisition of Qualtrics, the strategic significance of experience management, and his outlook on what SAP must do to retain a leading position in the intensely competitive enterprise-software business.

“I really believe that Experience Management—and experiences themselves—are the defining category in general for the new economy,” McDermott said.

“Because there’s a huge gap out there between what customers want, and ultimately what they say they get. And we think this is a $1.6-trillion problem that needs to be solved—so we went for Qualtrics and Experience Management.”

By acquiring unicorn Qualtrics quite literally on the threshold of its IPO, SAP made a $8 billion bet that it could not only make that wager pay off financially but also transform SAP’s brand promise, its market position, its product development, and how it engages with customers.

Asked to describe how he was able to convince Qualtrics founder and CEO Ryan Smith to step back from its hotly anticipated IPO and agree to be acquired by a huge corporation, McDermott attributed it to the shared opportunity to do something few companies have ever done: change the direction of an entire industry by creating massive new value for customers.

“These accounts that we serve need not only operational data that tells you what’s going on with these systems of record: ERP CRM, Human Capital Management, Supply Chain, Manufacturing, Warehousing solutions. They’re all very important, and extracting the data from these systems and giving a CEO or a management team perspective on what’s going on in real time is essential to running a company,” McDermott said.

“But—the problem with these systems is that they don’t tell you why things are going on. Why are my customers happy or sad? Why are my products landing or not landing? What’s going on with the people inside my company—are my employees activated and really concerned with what’s going on outside the company?”

All of those customer-driven insights have been pretty much absent from the traditional enterprise-software business. And it’s the infusion of them into SAP’s vast capabilities in operational data and insights that makes this acquisition so powerful.

McDermott: “One second of a bad piece of information hitting the internet can wreck a great brand pretty quickly. So you have to respond to things in social media in real time so that you know that your brand is standing tall. And if something does go wrong, then leaders can make the necessary adjustments and changes to fix it. So Ryan and I agreed that X data, or experience data—knowing the why to complement the what—is essential in running a good business.”

Indeed, a couple of months ago, after getting an in-depth peek into Qualtrics’ strategy and vision, I wrote a piece called I Have Seen the Future of Enterprise Software, And It Is SAP Qualtrics.

About a month later, after SAP released excellent Q1 financial results, I expanded on that idea in an article called SAP’s Brilliant Transformation: And They’ve Only Just Begun. In that piece, I describe how SAP—historically known as the archetypal on-premises software giant—is well on its way to generating more than 50% of its revenue from the cloud by 2023.

“Yeah, we’ve gone through a lot of change. Ten years ago, we said we have to be a purpose-driven company, and we dedicated ourselves to helping the world run better and improving people’s lives,” McDermott said.

“And that set us on a path of investing $70 billion in innovation. The world needed big data, we gave the world HANA. We had to refactor the ERP system on an in-memory data-management platform, and that gave us S/4HANA.”

Of that $70 billion, half was poured into those and other internal development efforts, and the other $35 billion was devoted to acquiring a cloud-applications portfolio that includes SuccessFactors, Ariba, Concur, Fieldglass, Callidus and other pieces.

“You add it all up and today SAP’s a pretty complete company in terms of the vision for the enterprise,” McDermott said.

Yes, pretty complete, but by no means a finished product. That’s simply a law of physics in today’s enterprise-software business where the pace of change, the level of competition, and in particular the relentlessly escalating demands of customers never let up.

So for SAP and its customers—and certainly for newly acquired Qualtrics—it must be reassuring to hear McDermott remain as open-minded to change and innovation as he was when he became SAP’s sole CEO 9 years ago.

“As I think about changing cultures, including our own, I really want to know why things are the way they are in every single relationship that we have, whether it’s the customer or the employee. I think this is a very basic human need,” McDermott said.

“So Experience Management to me is the biggest idea that I have seen in the enterprise in 25 years. And getting back to the Ryan Smith scenario, what he and I both see is you can’t have great experiences without also having great operating systems.

“But in the past, the operating systems have been guiding an experience without connecting any of the what’s and why’s. So I think we now have what we need in experience, and Ryan and Qualtrics have what they need in terms of the operating systems. And when you can put X-data and O-data together, and you can remember your X’s and O’s, you can probably run a pretty good company.”

And that comment reflects for McDermott not only the opportunity the SAP + Qualtrics combination offers to customers, but also the fundamental way in which the acquisition is changing—dramatically—who SAP and how it operates.

“And that’s what these systems are designed to do when they’re working at their best. We want to be a humble company, and a hungry company, but also as a company that is viewed as forward-leaning on the side of the customer.”

An overdose of CEO happy-talk? I don’t think so—such expressions are a core part of who McDermott is, and on a more granular level, the company’s recent financial results have been excellent, driving its stock price and market cap to all-time highs.

“Complacency is a disease—and lots of companies have it. Especially good companies, successful companies. It’s so easy to rest on your laurels, or to think about the great old days when you’ve built something that’s large and it’s become successful,” McDermott said.

“The reality is, if you think like that, you won’t be large and successful for long—this is not an economy and it’s not a customer base that tolerates that type of behavior, surely not for very long. And that’s why I think you’re going to see lots of companies that were yesterday’s brands not do so well tomorrow.

“We’re fighting complacency with all we have, and we’re not taking ourselves too seriously even when we do have a little bit of success.”

Because McDermott realizes today—as he has throughout his career—just exactly who is ultimately calling the shots, particularly in today’s experience economy.

“The real boss around here is the customer, and we should judge the quality of our work by the success of the customer,” he said.

“And I honestly believe the best days of SAP are well in front of us if we just keep the customer at the center of everything we do.”