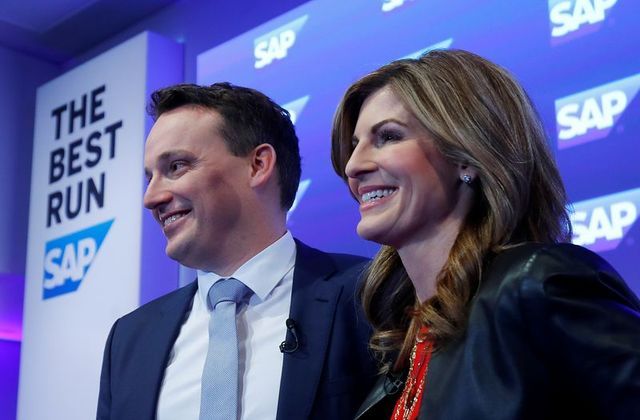 Dismissing Larry Ellison’s claim that Oracle is about to start ripping and replacing traditional SAP ERP systems, SAP co-CEO Christian Klein recently said SAP’s market share is more than twice that of any competitor, is growing rapidly in all phases, and is adding corporate customers that have never used SAP before.

There’s much more here than simple sniping from marketplace rivals that have competed viciously for decades. As ERP capabilities evolve rapidly to meet the new demands of the digital economy, the choices corporate customers make will have huge ramifications for years to come. The ripple effect will go beyond ERP, into related database choices, CRM apps, HCM apps, and more.

So it’s been fascinating to see how Klein and co-CEO Jennifer Morgan—both of whom have been on the job for only a few months—are responding to the intense challenges raised by Ellison, who’s run Oracle for more than 40 years.

Ellison kicked off this latest round of contention. In December, he claimed that Oracle would announce, in March, that one of SAP’s largest customers—and one based in its home country of Germany—would be abandoning SAP ERP and moving to Oracle cloud ERP. (For that full story, please see Oracle-SAP Showdown: SAP Calls BS on Larry Ellison Claim of Snatching Huge SAP Customer.)

During that December earnings call, Ellison went on to say that SAP’s entire customer base “is up for grabs” and that Oracle was going to capitalize on that opportunity as aggressively as possible. (More on that in Oracle Against the World: Ellison Trashes SAP & Workday but Grows Only 1%.)

A month later, at the Davos forum, Klein waved off Ellison’s claims. He said he looked into the matter himself and found no evidence of such a defection. Klein also promised that in SAP’s forthcoming Q4 earnings call, SAP would prove that its ERP business is vibrant and growing rapidly.

So here are a few of the big points Klein made on that recent earnings call, to show SAP’s ongoing strength in ERP and to disprove Ellison’s claims about SAP’s vulnerability in that area.

SAP’s ERP market share is twice as big as Oracle’s or anyone else’s.

“Today, around 40% of the S/4HANA customers are net-new and competitive wins for SAP. That’s reflected in our increasing ERP market share, which is by now approximately double that of our closest competitor.”

SAP’s winning new ERP customers among corporations that are new to SAP.

“While most of those net-new customers are midsized companies, at the same time we have also seen a very notable number of large enterprises with no previous SAP presence decide to implement S/4HANA, replacing competitive software at scale: Standard Chartered, British Telecom, Tech Mahindra, Avianca, Kubota and Ford, to just name a few.”

“Customers across all industries turn to SAP to help them master their digital transformations and become intelligent enterprises. Together with us, our customers are driving complete business transformations, embedding the latest technology innovations we deliver using real-time data as a tremendously powerful asset. And we are seeing an increased number of these large transformational deals—deals greater than €5 million (about $6 million) now contribute 1/3rd of our total order-entry.”

“In on-prem, software-license revenue grew at high single digits… We are now at more than 13,800 S/4HANA customers across 25 industries, an annual increase of 24%. This number includes 86% of the BCG [Boston Consulting Group] Top 50 Most Innovative Companies.”

“Vodafone recently went live on S/4HANA. This is one of the largest go-lives we have seen. And they are now running their global business on S/4. They are, by the way, a perfect example for a hybrid landscape, where customers license and operate a combination of on-premise and cloud technology, allowing them to gradually transition to cloud at their own speed.”

If that happens, good for Oracle—a huge win and one it will no doubt look to build upon.

But based on SAP’s ERP results that Klein laid out above, it would be hard to equate that one potential customer defection to the widespread troubles that Ellison is conjuring up for SAP.

As always, the customers will get the last word. We’ll be watching it all very closely here at Cloud Wars.

Attack of the Killer Database: Oracle Autonomous DB “Will Replace Everything”

Disclosure: at the time of this writing, Oracle was among the numerous clients of Cloud Wars Media LLC.