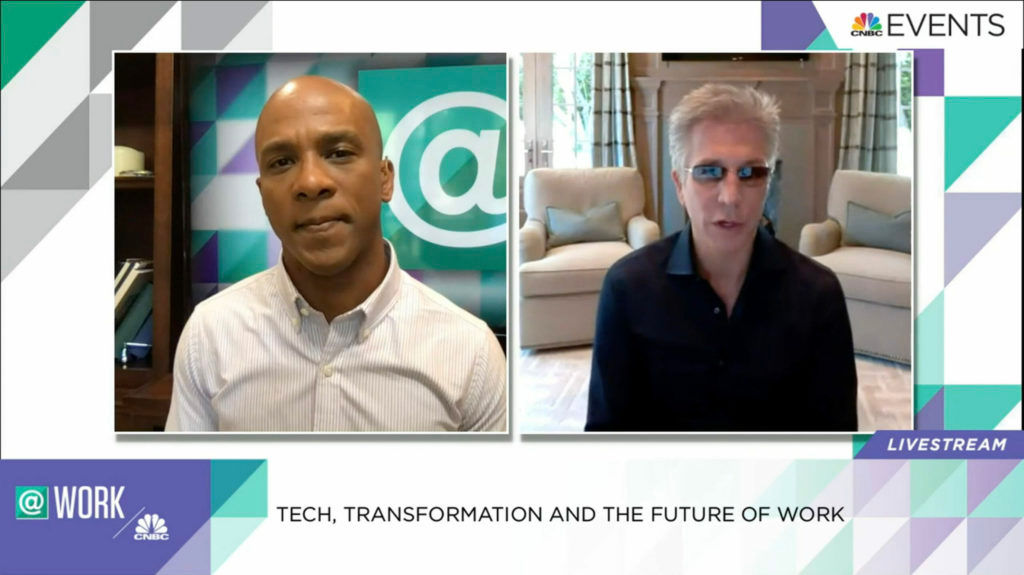 Having driven ServiceNow to its first billion-dollar quarter and a $77-billion market cap, CEO Bill McDermott has said the digital-workflow high-flyer will need to triple its employee base by 2025 to keep up with its torrid growth.

In a recent interview about the future of work, CNBC’s Jon Fortt asked McDermott to describe a couple of top-priority subjects that come up consistently in meetings with CEOs.

McDermott first touched on the need for digital-first thinking and for people-centered digital transformation, and then offered his views on the need for bold new thinking about people across a number of dimensions.

McDermott: “We have to absolutely win the war for talent.”

“We’re in a world where people matter most, and you’ve gotta take care of your own people and make sure your employees feel each and every day that they’re your most-important priority,” McDermott said.

“In our company, we’re probably going to triple the workforce in the next 5 years and what an opportunity to have a sea change, to have an employee base that looks exactly like the markets in which we compete.”

That’s a staggering growth rate—and bear in mind that ServiceNow is certainly not a small business. With a $4-billion annualized run rate and a Q1 growth rate of 36%, ServiceNow will need to find and hire many thousands of highly talented people from across the world to meet McDermott’s 5-year projection.

“It’s all about talent, and not necessarily about where the talent is domiciled.”

But that huge expansion at ServiceNow cannot and will not be done the old way, McDermott said. Because in the current COVID environment, employees are demanding more choices than they’ve ever been given before.

“Work is work no matter where the work is done, so if a person has the talent to do the work, and they’re in Idaho or New York City or Atlanta or in a faraway place outside the United States, then they’re more than welcome at companies like ServiceNow because we understand that it’s all about talent, and not necessarily about where the talent is domiciled,” McDermott said.

COVID “really has changed everything.”

Driven by a heightened awareness of and focus on health and wellness, employees want to be in control of where they work and, to some degree, when and how they work.

“And that choice, in my humble opinion, is beholden on every CEO to give to the people. And when you do that, you’re going to get great productivity payback. In fact, in terms of hiring people, onboarding people, and even offboarding people, these will all now be digital-workflow processes. So this distributed work, this work from anywhere, has really tethered to the workflow revolution very nicely.”

On top of that, McDermott said, employees expect that their employers will not just tolerate that new focus on health and wellness, but will in fact embrace it as a means to deliver great employee experiences and craft a corporate culture suited to these challenging times.

“The whole thing is about connectivity with people, and making people the center of everything we do, whether we’re talking with our customers about how they create great employee experiences or great customer experiences, it’s all about the people,” said McDermott, who’s as candid and thoughtful a CEO as you will find. “The fault line in every company has always been the front-line manager. People don’t leave companies; they leave managers. People have great careers at companies because they had great experiences with their managers.

“So it’s more and more important that the cascading effect of how you set the tempo up top, and then the next layer and the next layer, is so unified and so harmonized in the messaging.”

But that “messaging” can’t be part of a monologue, McDermott said; the conversation has to be two-way, candid, and constant.

“And then we need to do immediate pulse-checks on ‘How are we coming through?’ So if I have something on the scale of a global meeting, I know down to the individual level what the feedback was.

“We’re constantly asking people, ‘How are we doing? Can we do better? What are your ideas?’ And it’s amazing how the Now workflow platform of ServiceNow gives us the ability to go direct to consumer, if you will, which is the employees. And that makes all the difference.”

So even if your company’s not going to triple its number of employees by 2025, big changes are underway in the employer-employee dynamic.

Ask yourself: if you surveyed your employees on ‘How are we doing?’ and ‘Can we do better?’, would you be excited and enthusiastic to see the responses?

If not, better be prepared for some wicked attrition as the rules of the “work from anywhere” revolution change everything.