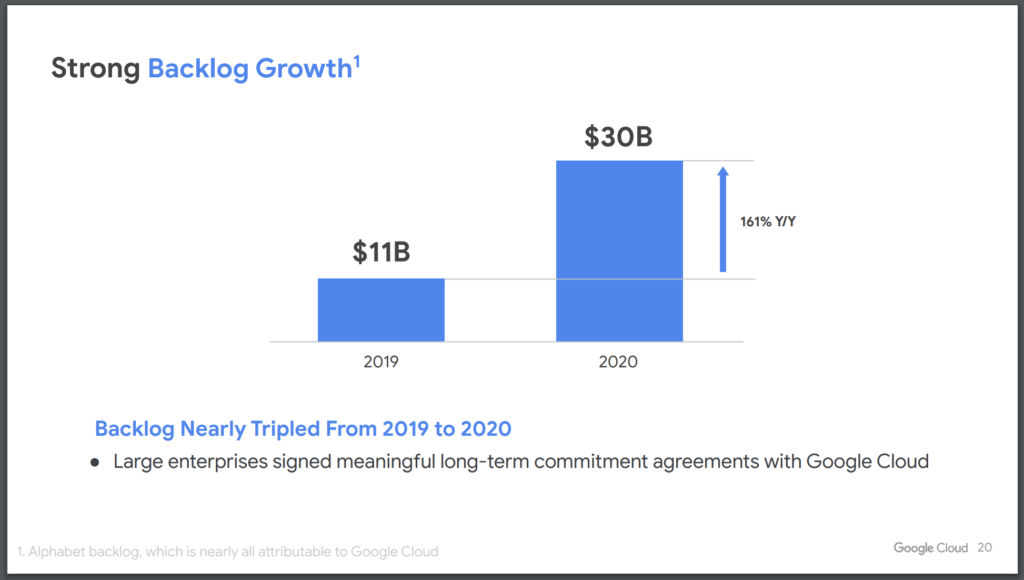 Kurian opened his 40-minute session with a slide presentation showcasing Google Cloud’s remarkable progress during his two years as CEO and then answered questions for about 20 minutes.

Before I get to the 5 slides that I feel truly underpinned his overview of the company’s recent past as well as its unfolding future, here’s one comment from the opening of the Q&A session that captures the high-level vision that Kurian has rapidly turned into reality.

“Once you get through that first phase of opening that digital front door, other options are possible,” Kurian told Goldman Sachs managing director Heath Terry.

“For example, in Financial Services, it opens the door from basic things like account management to higher-value advisory services… And in e-commerce, the way you do demand-forecasting, logistics and supply chain—that last-mile delivery—is vastly different than when you had people visiting stores.

“We’re seeing not just that process of opening the front door to reach consumers, but now the internals of the organization needing to change in order to capture what digitalization really means.”

Yes, there’s a lot of money to be made in helping address those out-of-date and often-brittle “internals of the organization.”

That’s why the market opportunity for Google Cloud and other members of the Cloud Wars Top 10 is so massive. It’s also why parent company Alphabet has every reason to be very pleased at how Kurian and his team are scaling revenue while simultaneously slowing the growth rate for essential expenses, which I recently analyzed in 5 Reasons Why Google Cloud’s $5.6-Billion Loss Is Excellent News.

One of Kurian’s opening slides reflected that mind-boggling cloud opportunity, with nearly half a trillion dollars in new spending up for grabs over the next few years: 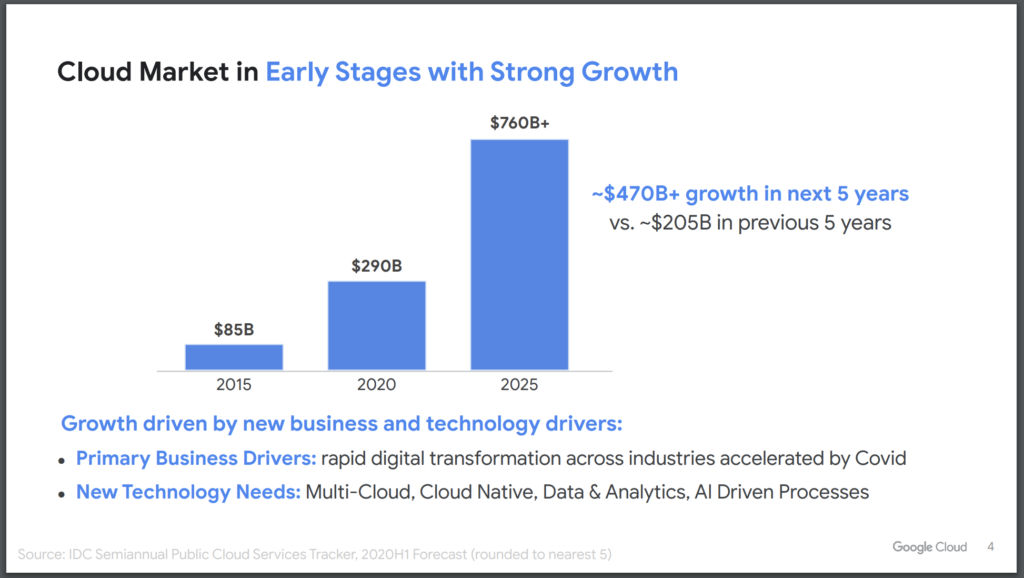 And on top of Google Cloud’s 47% revenue growth in 2020, the company is also generating an enormous backlog of future business, as reflected in this slide from Kurian:

Of course, these backlogs cannot be precisely equated to future revenue—but they do give a pretty impressive indication of future momentum. And even in a go-go market like the enterprise cloud, it is exceedingly rare to see a company of this size nearly triple its backlog within a single year.

That stunning momentum is a function of great technology, which Google has long had, but more so due to the world-class talent Kurian and team have been pulling into Google as fast as possible.

In his conversation with Terry, Kurian said, “We’ve built a great sales team, and that’s a credit to [president of sales] Rob Enslin who runs that team. And we’ve brought in some fantastic talent from across the industry, while at the same time we’ve also had great relationships with partners.

“We focus on what we do well—for example, we don’t have large professional-services teams—creating opportunities for partners as we grow, and we’re seeing the partner ecosystem recognize that.”

In his slide presentation, Kurian offered these 8 examples of the impact that Google Cloud’s dramatically expanded go-to-market and development teams have had since his arrival in January 2019. 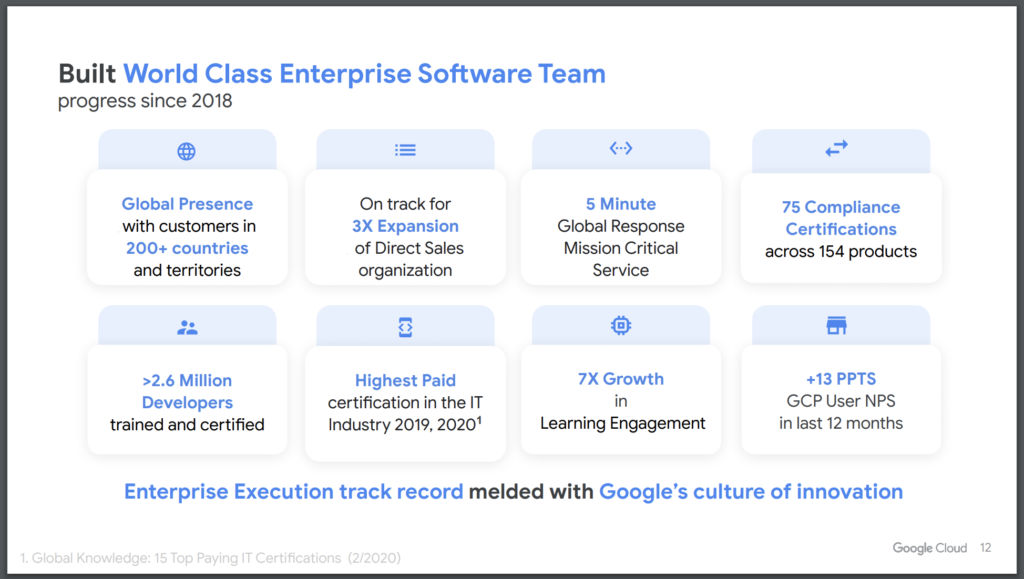 Customers are clearly liking what they’re hearing from Google Cloud, and this slide from Kurian reveals that many customers are expressing preference for GC over Amazon’s AWS (#2 on the Cloud Wars Top 10) and even #1 Microsoft.

The chart touches on which vendors are viewed as strategically important; which deliver the best ROI; and which those customers expect to do business with. 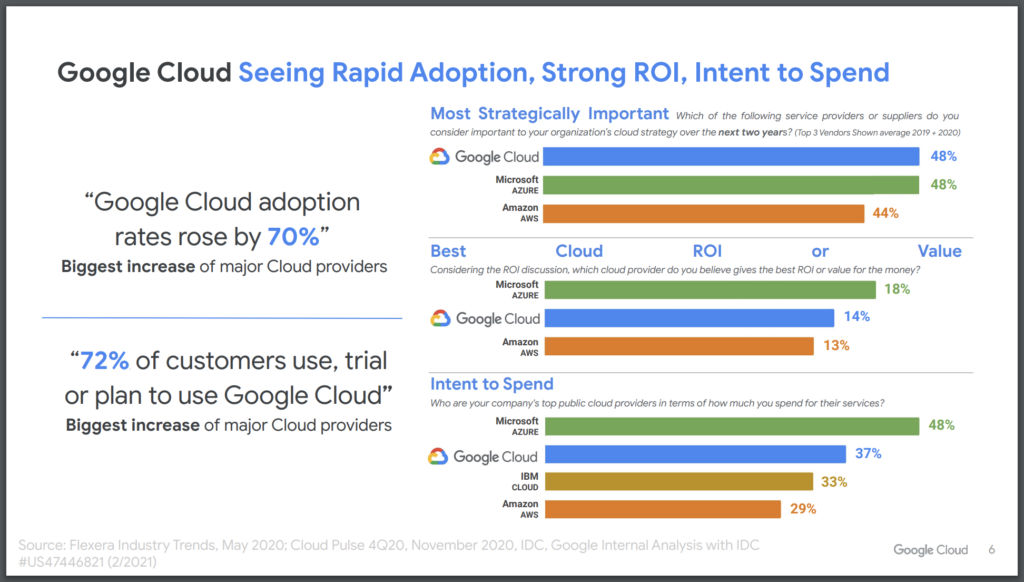 As a result, Kurian said, the numbers for Google Cloud are looking up in key areas such as number of customers, balanced growth across direct and indirect, and land-and-expand dynamics. 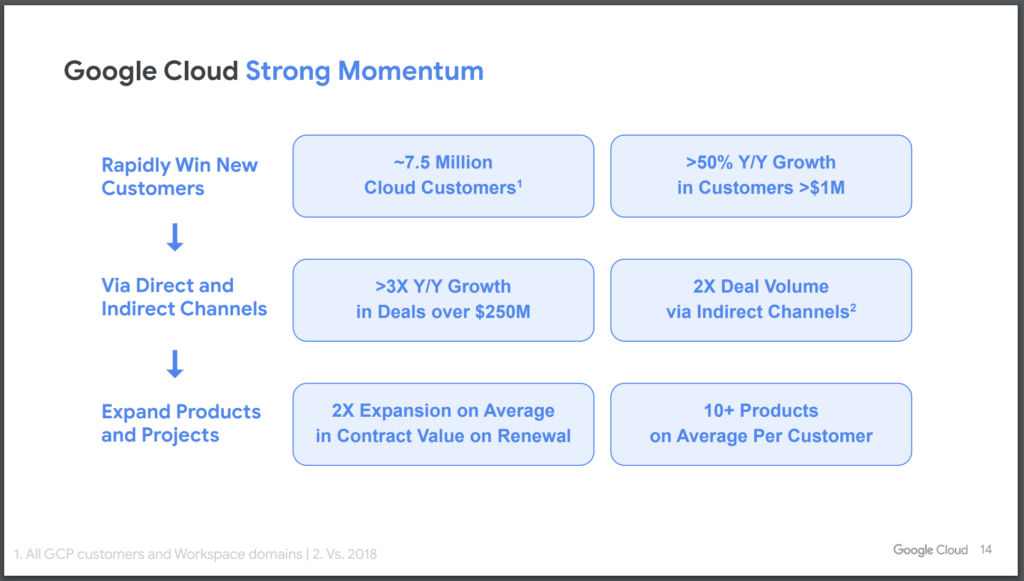 Asked by Goldman Sachs’ Terry to comment on what the biggest trend of 2021 might be, Kurian said, “Many CEOs recognize that digitization, even though it was accelerated by the pandemic, is fundamental. And so we expect that to continue beyond the pandemic. We expect them to see greater differentiation in the kinds of solutions people are adopting. And we continue to see organizations making important business decisions about what sort of technology platforms they need.”