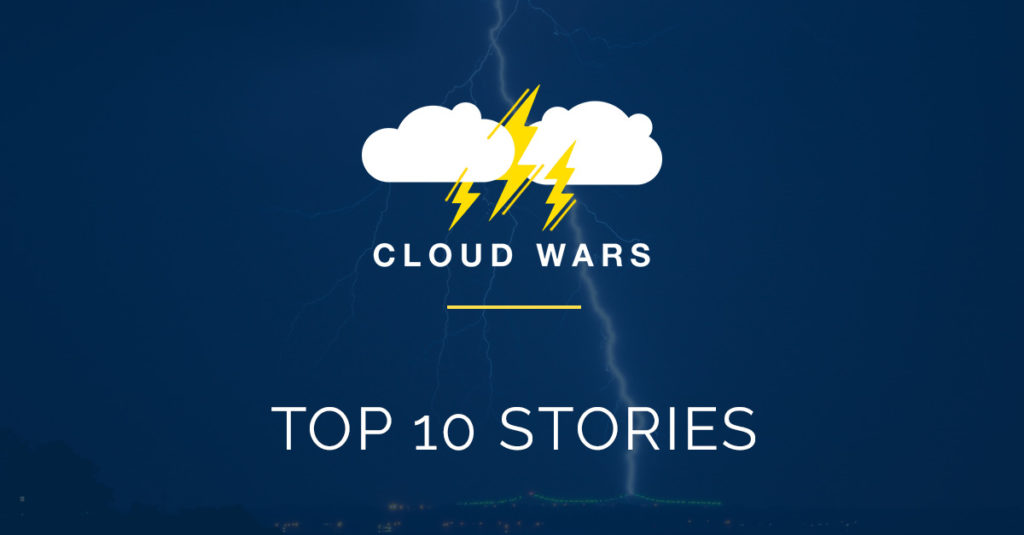 Across industries, geographies, and strategic imperatives, the cloud this year blew away any and all doubts about its global pre-eminence as the engine of vitality and opportunity for the digital economy.

So it was quite a challenge to sift through the 200+ analytical articles we posted this year to pick the 5% that made the biggest impacts across this boisterous and frothy industry.

In particular, an article of ours about Microsoft from mid-July stood out in my mind as the #1 story of the year because I felt it captured not only the breathtaking vision and ambition of this world-changing marketplace, but also a level detail and insight that demonstrates clearly how and why Microsoft has been #1 on the Cloud Wars Top 10 every week for the past 2 years.

For an industry still in its very early days, that’s a staggering number—and it’s also much larger (at least 25%) than AWS’s revenue will be for that period. In fact, it will likely exceed the combined cloud-revenue figures for Salesforce, SAP, Oracle and IBM. And just how exactly do Satya Nadella and his company intend to reach such heights? As befitting the #1 article of the year, all I can say is it’s quite a story.

The #2 story on our list of the top articles of the year is I Have Seen the Future of Enterprise Software, And It Is SAP Qualtrics. This one earned that lofty spot because it describes not only the massive changes within SAP since the acquisition, but also what I believe will be equally disruptive changes across the entire enterprise-software business.

Our #3 story is Google Cloud’s Thomas Kurian being named as the Cloud Wars CEO of the Year. It has been an extraordinary year for Kurian as he’s reinvigorated a high-profile company whose customer-facing capabilities lagged far behind its technological prowess.

For these and for each of our Top 10 Stories of the Year, we’ve also pulled together several related articles to give you additional perspective and insights on what shaped these tectonic moves in the market. Perhaps you’ll want to keep this meta-article as a guide to not just what happened in 2019, but where things are headed in the Cloud Wars.

Many thanks to all of you for your time, your readership, your comments, and your support throughout 2019, and I wish all of you a wonderful holiday season with your families and friends, and a fabulous 2020.

As described above, this piece—as well as the dozen or so Microsoft pieces below—offers some rich insight into how and why Microsoft’s become the world’s most-influential tech company.

Why Microsoft Is #1 in the Cloud: 10 Ways It’s Getting Bigger, Stronger, Better

2. I Have Seen the Future of Enterprise Software, And It Is SAP Qualtrics

It’s ironic that the company that four decades ago created the classic Newtonian tool for operations—ERP—this year became the company to deconstruct classic ERP and begin remaking it with customer-side data and insights as well. In turn, that repositioning is happening across every major SaaS player in the Cloud Wars.

SAP Qualtrics CEO Ryan Smith: ‘I Was Alone for 17 Years—I Know What That’s Like’

3. The CEO of the Year Is Google Cloud’s Thomas Kurian

Simply put, the perfect new leader for a high-potential company at the ideal time. The high-value capabilities Kurian is helping Google Cloud unleash will force every other vendor in the Cloud Wars to get better. Much better. And quickly.

Watch Out, Microsoft and Amazon: Google Cloud CEO Thomas Kurian Plans To Be #1

4. How Salesforce Plans to Defeat Oracle and SAP While Scaling to $35B

I pulled about 14 slides from Salesforce’s 64-slide “Investors Day” presentation to outline Marc Benioff’s unique blend of vision, insight, and passion that has enabled Salesforce to achieve levels of growth unmatched by any other publicly traded company in history.

Why Salesforce Is the World’s #1 SaaS Vendor: 360-Degree Scale

Attention Workday, SAP and Oracle: Is Salesforce Jumping into HCM?

After a highly successful decade running SAP, McDermott has jumped over to ServiceNow as it approaches its first billion-dollar quarter. Here’s how he plans to blow that out to a $10-billion company in a very short time.

Strong words from one of the true pioneers of the SaaS industry and a long-time passionate advocate for the cloud. But Bhusri, who says that inside Workday he’s known as “the Pied Piper of ML,” says the disruption is only just beginning.

Why High-Flying Workday Is Pushing ML over M&A

In 2019, some of the world’s largest and most-successful companies took huge steps toward ensuring they’re in position to extend that success into the digital age. And at the center of all these efforts is the CEO’s #1 priority: create fabulous experiences for customers.

As Amazon Battles with Retailers, Microsoft Leads Them into the Cloud

Inside Walmart’s Digital Transformation: 30 Tangible Steps on its Journey

Amazon and Lyft: Is $100 Million a Year a Bargain or Bungle?

From Financial Services to Manufacturing, Here’s the #1 Priority for CEOs

As Amazon Battles with Retailers, Microsoft Leads Them into the Cloud

How Microsoft, Amazon and Workday Are Driving Machine-Learning Revolution

Revealed during SAP’s Sapphire event in May in a conversation I had with SAP co-CEO Jen Morgan and Microsoft EVP Judson Althoff, this breakthrough agreement marked a new level of strategic collaboration among major players in the cloud business. Microsoft’s openness to such agreements is a primary reason it’s #1 on the Cloud Wars Top 10.

9. Attack of the Killer Database: Oracle Autonomous DB “Will Replace Everything”

Rarely has a product with so little quantifiable revenue impact been the source of such lofty promises for future piles of gold. But Larry Ellison’s made a fabulous career out of achieving what others said was not possible. If he can parlay some of that potential into cold hard cash, the Autonomous Database could indeed become what Ellison has promised: the most-successful product in the company’s history.

The tech industry is a more interesting and more innovative place when IBM’s operating at full strength. In the second half of 2019, the iconic company showed signs of riding the cloud to new levels of relevance and capability. Can IBM continue to blend pieces of its far-flung empire to deliver what customers need?

IBM Goes All-In on the Cloud

IBM Sales Leader: “Every Discussion Is About Cloud”

Top 3 Tech Battles in 2020: Microsoft vs. Google, Salesforce vs. SAP, Amazon vs. Oracle