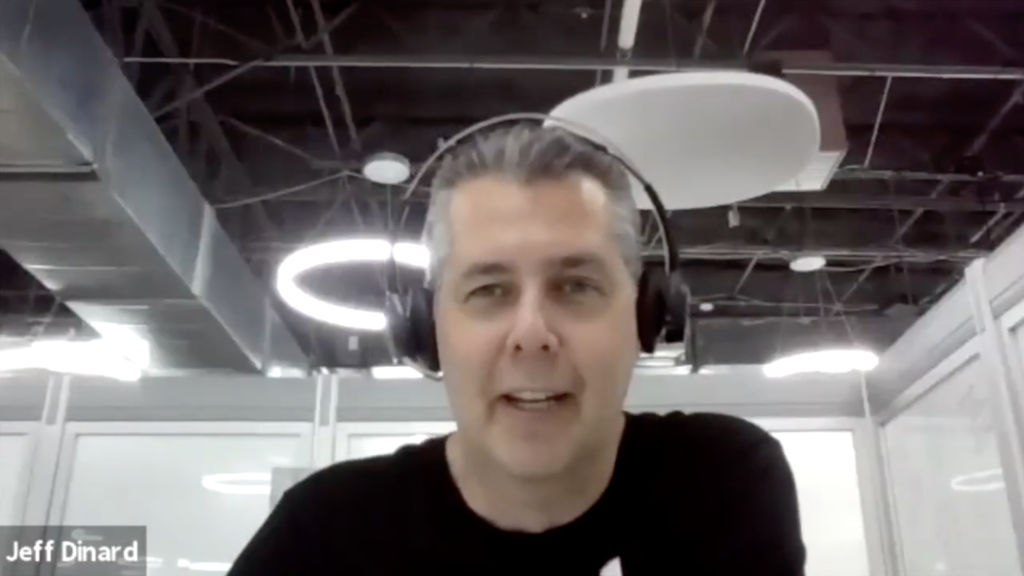 Over the past 25 years, I’ve been privileged to speak with thousands of CIOs but until recently never heard one describe the CIO job as the ability to lead “with my heart and with love and grace and care and empathy and compassion.”

Then again, while Jeff Dinard clearly relishes and embraces his job as CIO, he doesn’t approach it with that faded and formulaic perspective of something along the lines of ‘the CIO’s job is to leverage IT to support the business.’

In his 15 months at high-flying Vari—the company that made its breakthrough with standing desks and is now a broad-based creator of desks, office furniture and partitions—Dinard has helped the company not only navigate its way through the pandemic but also expand its product line, handle surges in revenue and workforce and traverse the dissolving boundaries of B2B and B2C more than once.

I was introduced to Dinard by SAP, which has become a strategic partner for Vari, and in a moment I’ll share his views on the impact SAP’s had on his company. But I also want to share Dinard’s views on culture, leadership, growth, teamwork, vision and the willingness to embrace change as a competitive advantage. And because Jeff—after my 30-minute chat with this charming and disarming executive, I find it hard to continue calling him by his last name—speaks with such deeply personal feeling and in a way that is not common among CIOs, I’m going to run his comments verbatim.

If you’d like to hear Jeff’s perspectives in his own voice, please check out this episode of our recent Cloud Wars Live podcast: Thriving on Hypergrowth: Vari CIO Jeff Dinard.

One more thing: throughout our conversation, Jeff frequently spoke glowingly about the people and companies who give Vari money in exchange for Vari’s products and services. While such people are generally known as “customers,” in the language of Vari, they are “fans”—and you’ll see Jeff make that reference with zero affectation.

Fluidly flipping from B2C to B2B and back again

“Vari was formerly VariDesk and you may know us as the standing desk company and you’ll see that I’m actually standing. In 2012, we started as a B2C company selling our original sit-stand converter, that sat on top of the desk, directly to consumers. And we’ve been growing at a rapid pace, as you said, and since around 2017 or so, we’ve moved into a bit more of a B2B play, as we’ve begun to outfit full offices for our fans out there. And so, now it’s far more than that original sit-stand converter, it’s the standing desks like at which I’m standing right now and standing conference tables and lighting, et cetera, et cetera, et cetera.

“Most recently we’ve launched VariSpace, which is a new concept for us and it’s essentially a way for us to lease a fully furnished space to our fans with shorter-term leases and great amenities.”

“And now I would say, I guess, ironically, we find ourselves in an interesting position in which many of our fans are starting to head back to the office. And so, the pendulum is swinging back in the other direction… It’s really been just about trying to meet our fans where they need us to be. So it’s been an interesting time for us to watch that pendulum swing from our original B2C to B2B, then back to B2C during the pandemic and now back to B2B.”

Culture and the cultivation of “fans”

“We’ve called our customers ‘fans’ since our inception and like any company, we have our core values and of course, other companies will tell you the same thing. Other companies will tell you that their core values are not just a handful of things written on the wall, but that they really live them. And that’s debatable depending on the company, but I can say that for Vari, it’s an absolute reality for us.

“And one of our core values is creating lifelong fans, right? And you could argue that it’s our first core value, but we really truly live all of our core values every day but we certainly focus on creating lifelong fans. And we often joke and comment that we’re all in sales, which I think you and everybody else will appreciate. At the end of the day, it’s all about driving revenue and driving the business.”

Flexible mindset for a fast-flex world

“The cornerstone of our success in building flexible workspace solutions is literally that you can move the furniture with tremendous ease. We call them QuickFlex Walls and they can be assembled and disassembled in minutes with no tools and you can move them. And last weekend we did what we call an ‘HQ flip’, which means we essentially took about 70% of the people in this building and moved them to a different part of the building, and we do that a few times a year. One, it keeps the place fresh and exciting and interesting. And two, it shows our fans who come through to do tours, it shows them that we put our money where our mouth is, and that we’re selling, for lack of a better word, we’re selling you a flexible workspace solution, and we do it too. We eat our own dog food and we constantly move the furniture around.”

“As you and I have been discussing, March of 2020 hits and everyone’s plans changed. We immediately stopped the selection process for ERP and PLM and TMS, and just paused, which I think everybody in the universe did. But what was really fascinating for us as a brand is, we’re very closely knit, as you can imagine, and we all talk to each other, we’re all fantastic partners. And one of my peers on the leadership team who runs product and leveraged that pause for great effect. She said to me, ‘Gosh, I think my demand-planning and inventory teams are really, really struggling. Our growth trajectory’s so large and so rapid that they’re starting to hemorrhage a little bit. May we take this opportunity while we’re pausing to chat about maybe doing a demand-planning platform?’

“So it ended up that we landed on SAP’s Integrated Business Planning, because at that point in time, we knew that SAP S/4HANA was the front runner for ERP. So we said, ‘There’s tremendous synergy here—why don’t we use this pause time, about 16 weeks, to finalize our ERP selection process, wrap that box, put a great big bow on it, make the final decisions, do any negotiations we need to do, et cetera?’

“But while CFO Craig and I were wrapping up negotiations and getting to the finish line, we also had the teams implement SAP’s IBP in a 16-week period at the end of last year. Our ability to flex and be nimble and agile has been really paramount to our success.”

“But I have to say the overarching question about SAP is the need for really, really rock-solid partnerships and relationships in these types of initiatives. I actually recently said on another SAP panel that the relationships we build and maintain are the most important things in business, and I truly believe that.”

“I built really, really, really strong relationships with the three major players with whom we were dealing at that time on the SAP side. And the power of those relationships was built on exactly, precisely the same foundation of all great relationships, which is that trust is built on authenticity, transparency, and communication. And we call that ‘magnetic leadership.’…

“The functionality was obviously there, but really at the end of the day, it was the relationships and partnerships that made the most impact for us. And essentially, it made it easy for us to make the decision to go with SAP, even if you sometimes hear these myths about them being this giant, massive entity, and so grotesquely expensive. And I think these are myths, right? I truly believe that the people at SAP, at least the people with whom I’m dealing, are the most down-to-earth and charming and caring and kind people, who truly want what’s best for me and for our business. And I would also say, candidly, it’s not grotesquely expensive. We were super relieved to find that we could make it work for our brand.”

The new role of the CIO

“I’m only speaking for myself, but I don’t believe that the CIO’s role has changed. And again, this is a day-long philosophical conversation, so I’m going to give you the super high level. But I agree with what you intimated, which is that I truly believe that my role is a leader first and a businessman second, and a technologist, you might argue a distant third, right? And so, again, I know you don’t want the day-long answer, but I’ll just say that at the end of the day, my job is to hire a team of servant leaders.

“And as I said before, servant leaders who are better than me, smarter than me and faster than me, and folks who want nothing more than to deliver excellence for the company without fail. And similarly, I would submit that it’s not even my job to motivate them, right? It’s my job to hire motivated people. And beyond that, I would say truly that my day-to-day job is to care for them. And I say this very frequently, but it’s my job to lead them with my heart and with love and grace and care and empathy and compassion, which are very different things.

“And so, by doing that, we’re maintaining a culture of care in which people really want to be here and they deliver excellence, as I say, because they want to and not because they have to, or because they need to. And so, trust me when I tell you that this is not soft and fluffy, this is really the hard stuff. And so, in my experience, the best CIOs are the ones who embrace this, they embrace what I say is the hard stuff, right?

“Because this is what drives results from the team, which supports the company’s ability ultimately to serve our fans and drive revenue.”