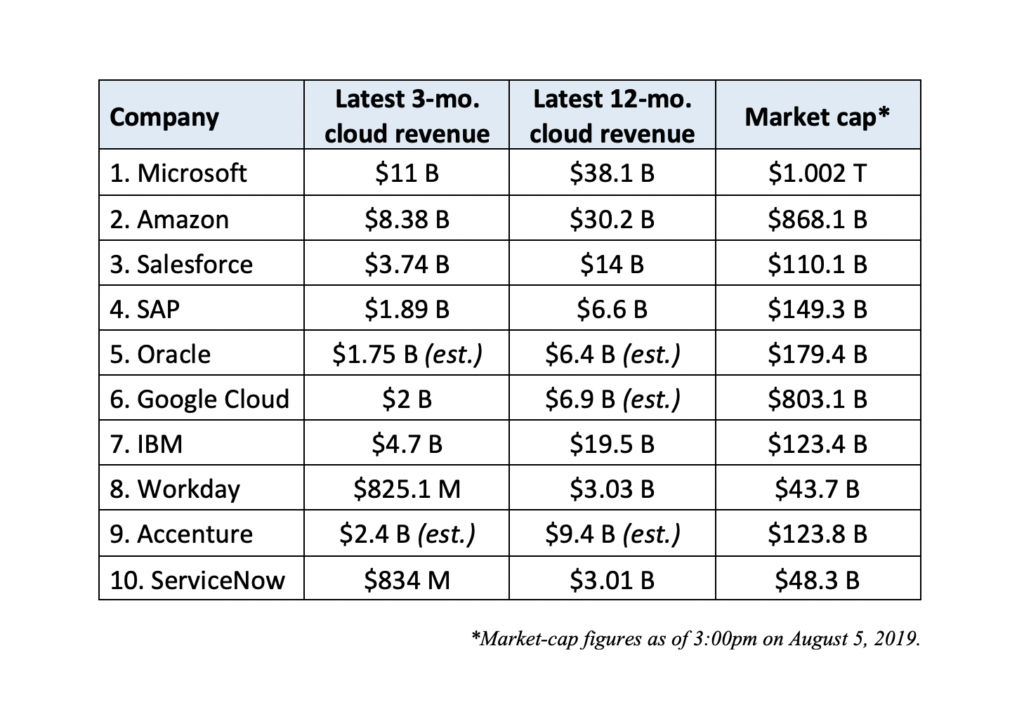 The raging-bull market for enterprise-cloud services hit full stride in Q2 as the Cloud Wars Top 10 vendors rang up revenue of more than $37 billion.

With market leader Microsoft and #2 Amazon generating 50% of that $37 billion for Q2, the sheer Q2 volume among the Top 10 is heavily tilted toward the top two. But in spite of that unmistakable split, most of the other Top 10 cloud vendors experienced revenue growth of 25% or more. #4 SAP registered the highest growth rate for Q2, at 40%.

Here are some comparative numbers for the Q2 revenue, TTM (trailing 12 months) revenue, and market caps for the Cloud Wars Top 10.

(Please note that for Salesforce and Workday, whose fiscal quarters do not correspond with calendar quarters, I’ve included figures for the 3 months ending April 30 rather than June 30.) 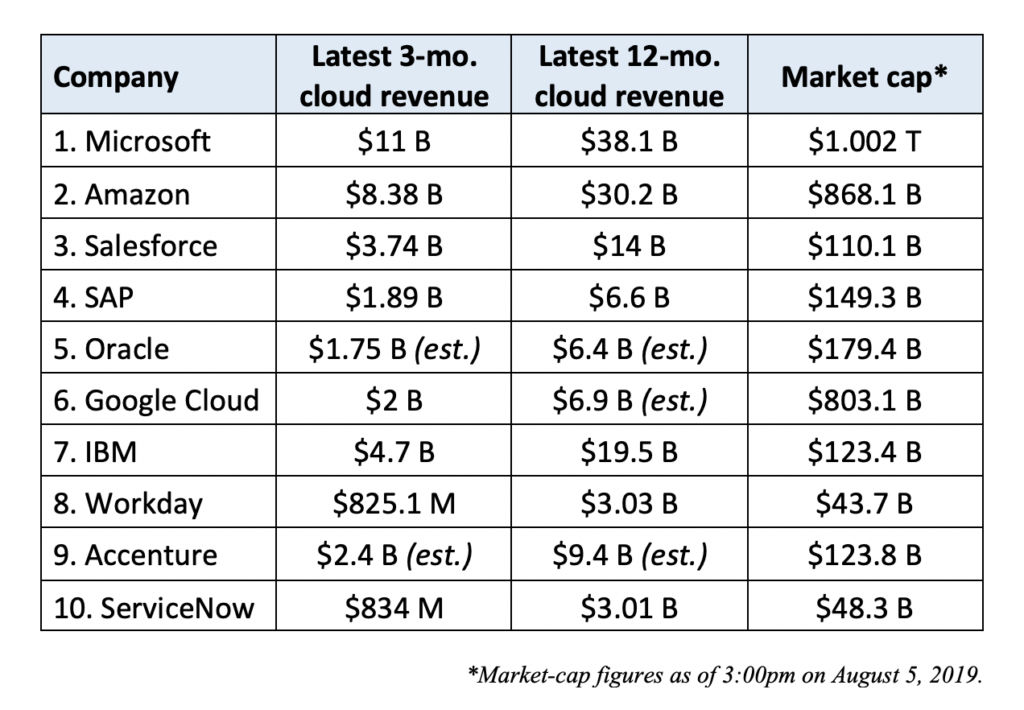 And here’s a quick overview of how each company’s been doing recently:

Its $11 billion in fiscal Q4 cloud revenue is by far the highest quarterly revenue figure any cloud vendor has ever posted. And it’s the result of a 39% growth rate.

With AWS Q2 revenue of $8.4 billion, the category king in IaaS continues to show remarkable growth and innovation for a company that’s posted $30 billion in revenue over the past 12 months.

The company’s going all-in on its Customer 360 initiative, which Marc Benioff says now includes not only customer experience but also employee experience.

While a temporary blip in China revenue drew lots of attention, Bill McDermott emphasized that the China business is fine—and that, in spite of that hiccup, SAP has the highest growth rate of any major cloud vendor.

The recent revelation that the company’s revolutionary Autonomous Database is starting to have a material impact on revenue has reinvigorated the company’s fortunes in the cloud.

Breaking with tradition, parent company Alphabet offered some detail on Google Cloud revenue for Q2, shedding some light on its $8-billion annualized run rate, which means it racked up $2 billion for the quarter.

With organic cloud growth dwindling to 5% (8% in constant currency), IBM is banking that the addition of Red Hat will jumpstart its large but slow-growth cloud business.

Machine Learning’s part of the big story for Aneel Bhusri and company, which over the next several months is very likely to post its first $1-billion quarter.

I’m guessing its quarterly cloud revenue is now about $2.4 billion, but the company’s become less forthcoming on such details.

With $3 billion in TTM, ServiceNow is betting that its broad new partnership with Microsoft plus a big focus on elegant new mobile apps will trigger its next big round of growth.

Disclosure: at the time of this writing, SAP, Oracle, Google, IBM and Workday were clients of Evans Strategic Communications LLC and/or Cloud Wars Media LLC.