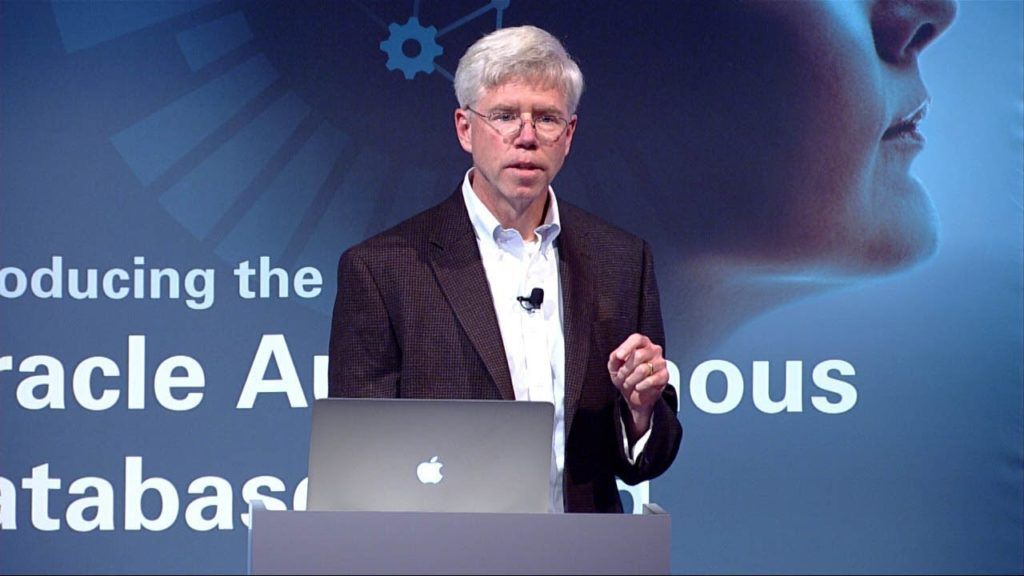 Data-driven companies will be the winners in the next phase of the digital economy—the experience economy. Oracle claims that its Autonomous Data Warehouse is the best solution for these companies and that it has three significant advantages over both category-king Amazon and shiny new object Snowflake:

autonomous technology, extreme security, and its own high-performance cloud infrastructure.

While businesses are expected to spend close to $20 billion in this booming segment of the cloud-computing marketplace in 2021, there’s an even more-compelling reason behind why Oracle, AWS, Snowflake and others are battling so aggressively for leadership in this space.

That’s because data warehouses are at the epicenter of the data-driven capabilities that every business is looking to build or enhance in 2021 and beyond:

That’s one of the primary reasons why Oracle believes its Autonomous Data Warehouse will take the lion’s share of the market and leave AWS and Snowflake fighting for leftovers. Oracle contends that over the past 40 years as the world’s pre-eminent supplier of enterprise databases, it has created and pulled together an unrivaled set of complementary tools, solutions, and expertise into a single converged data-warehouse service. That service gives customers capabilities no competitors can offer: unmatched business value via support for multi-model, multi-workload, and multi-tenant requirements integrated seamlessly into a single, modern converged database engine.

But Oracle is certainly not resting on its past achievements to differentiate itself from two worthy competitors that have established high profiles in very different ways: AWS through being the originator of the IaaS business, and Snowflake via its glitzy IPO earlier this year.

Oracle is betting that customers will find that its autonomous technology—something no other cloud or database vendor has matched—delivers a level of value, impact and flexibility beyond what any competitor can deliver.

And that’s because that self-driving, self-repairing, and self-improving technology can address the two primary uses of a data warehouse, not just one or the other.

“For both analytics and OLTP, autonomous is the primary differentiator,” said George Lumpkin, Oracle vice president of product management for Autonomous Data Warehouse in a recent interview.

“Autonomous Data Warehouse lowers the cost for customers because you need fewer people to run it. And at the same time, customers are finding that Autonomous Database is better than any other database in terms of reliability, scalability, and security,” Lumpkin said.

“And it performs better because it’s constantly tuning the system to optimize performance. We’re uniquely able to do that because of the intelligence we’ve been building into the Oracle Database, via ML and AI, for many years.”

Here’s what several customers are saying about their experiences with Oracle’s Autonomous Database:

“Data warehouses today have to be able to do many things very well and do those things at the same time,” Lumpkin said.

And every company is more focused than ever on the need for end-to-end cybersecurity, Lumpkin said.

“In the age of cyberattacks, security is a top priority for our customers. We have various components that are looking at and evaluating users and privileges in real time to ensure policies are followed; we flag discrepancies that arise and alert the appropriate systems or people to take appropriate action; and we apply 40 years of expertise in security-data profiling and in knowing what customers need and want. That’s all bundled into Oracle Autonomous Data Warehouse, and it would be very difficult—extremely difficult—for a company that hasn’t been doing that for 40 years to be able to match those capabilities and that knowledge of customer requirements.”

Oracle also believes that the constant self-tuning that takes place will become increasingly valuable to business customers in these data-intensive times because modern workloads are generating new data 24/7, Lumpkin said.

As Mohammas Salamah, business technology director of Nabil Foods, stated, “We found Autonomous Data Warehouse to be the best solution. It secures itself, manages itself, tunes itself, and is less expensive than other cloud providers.”

“Another area where Oracle technology stands out involves the very sophisticated and mature hardware and software combinations we use in the Exadata platform. That enables us to detect and isolate storage faults as they occur, and to correct them almost instantly.

“Over time, that’s a feature that really pays off for customers in availability, which they indicate is a top priority. Running on Exadata, Autonomous Database is fully elastic and customers can automatically scale compute and storage with no downtime. Plus, other cloud database services don’t offer true non-disruptive online patching and maintenance,” Lumpkin said

So those differentiators for Oracle Autonomous Data Warehouse—better, hardened  security; a fully converged autonomous data-warehouse service that greatly simplifies management and maintenance; plus nonstop self-tuning, self-monitoring and patching—are all big pluses in Oracle’s favor. But on top of those advantages, customers are also seeing big cost savings when they go with Oracle, as shown in this slide: 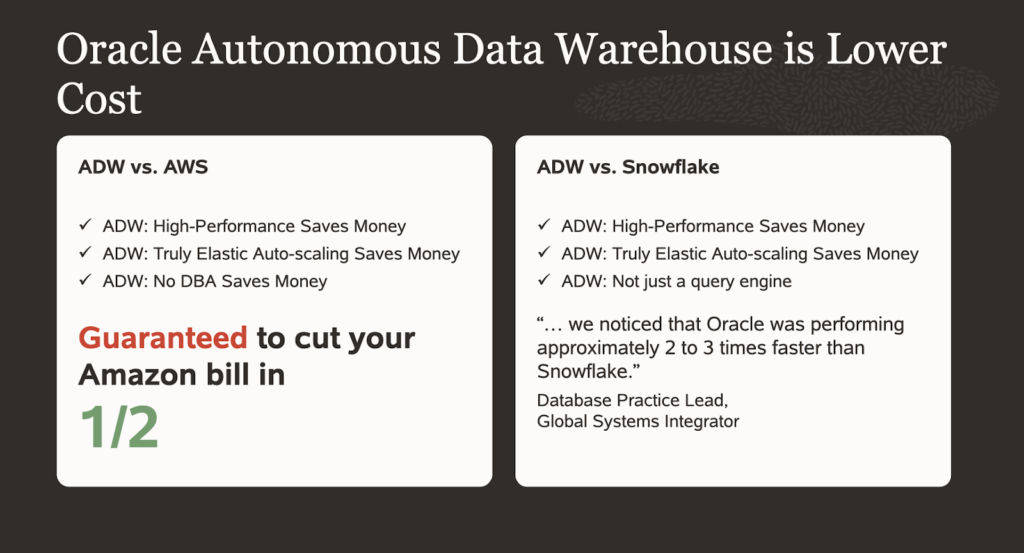 “Customer say that Autonomous Database lowers their TCO, and there’s no question it does that,” says Lumpkin.

“But they also really, really like its agility. One customer said they were able to roll out a new system in just 2 months—they said that was something they would never have believed was possible.”