Want to Sell Like Microsoft? Here’s 5-Step Plan behind Their Killer Sales Org 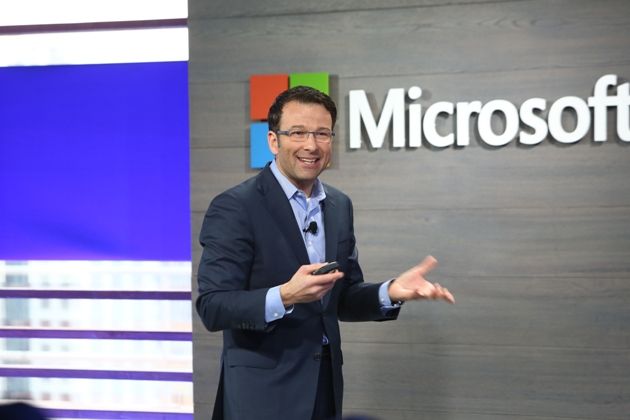 One of the primary drivers behind the ascendancy of Microsoft to the world’s largest cloud vendor and also one of the world’s most-valuable corporations was the massive reimagination of its global sales organization that started a few years ago.

So it was fascinating to hear the primary architect behind that transformation describe how and why Microsoft undertook that enormous—and risky—initiative.

Judson Althoff, executive vice president of Microsoft’s worldwide commercial business, laid out the company’s 5-step plan for “how 50,000 people go to work every day” during his appearance at a UBS investors conference earlier this month.

The subject came up at the very start of Althoff’s 40-minute interview when UBS analyst Karl Keirstead, describing the results of the reorg as “brilliant” and “phenomenal,” asked Althoff to explain Microsoft’s approach.

Now, before getting to Althoff’s comments, I want to note that financial analysts are generally not disposed to using such flowery language about companies they’re paid to scrutinize rigorously, but Microsoft’s financial performance over the past 3 years fully justifies Keirstead’s descriptions.

And because most companies would love to generate the types of results Microsoft has had, I’ll share several excerpts from Althoff’s description (from the Microsoft transcript) of the 5 steps that he and his team took to create one of the world’s greatest sales and go-to-market teams. And while his explanation of what Microsoft did is straightforward and seems relatively simple, keep this in mind: Althoff called the execution of the 5-step plan “a Herculean change-management effort.”

“Changing the model of how 50,000 people go to work every day is an interesting thing to do because much as you would note, we couldn’t exactly call up Wall Street and say, ‘Hey, could you all kind of look the other way for a couple of quarters? Trust us, everything is going to be just fine!’,” Althoff told Keirstead.

“Instead, we had to deliver against our current long-range plan while also effectively changing the engines on the plane and flying it at the same time.”

“The first was an industry pillar to get laser-focused on organizing by industry in a period of time in the evolution of the computing and high-tech industry where customers are trying to transform digitally. It’s sort of an obvious direction to become far more industry-aligned because if you want to help someone through a transformation, you have to know their business very well.

“Digital transformation has to be business-led and then followed by technology—technology has to be the servant of that transformation. And so us getting deep across top industries—the obvious ones like financial services, healthcare, manufacturing, retail, and the public sector as well—it was just super-critical for us to realign our focus by industry.

Wait a minute—why would a tech company need to devote a huge effort to technology as part of a restructuring? It’s fascinating to hear Althoff describe how that was necessary because Microsoft’s former leadership in the years leading up to Nadella being named CEO in February 2014 had allowed innovation to ‘atrophy.’

“A tech pillar may seem obvious but Microsoft pre-Satya and pre-transformation had really atrophied in a lot of our innovation,” Althoff told Keirstead.

“And Satya was very quick early on and his CEO tenure to point out that ours is an industry that doesn’t respect any tradition, but rather respects only innovation. And so we effectively had to go back-to-school. We had to retrain a lot of our folks.

“We had to unfortunately let go a lot of sales-overlay roles in exchange for hiring developers into our sales organization and into our customer facing groups who could effectively roll up their sleeves and write code right alongside of our customers.”

That effort took place across the 5 solution areas within Althoff’s commercial organization:

“In those five core areas we had to retrain a lot of folks, hire in a lot of new folks, and like I said kind of go back-to-school,” Althoff said.

“The third pillar was to invest in a world-class customer-success organization. You can think of this as non-billable consulting people who live with the customer beyond the deal. And in a consumption economy, which the cloud really is, these roles are super-critical because you have to do more than just sell in a design concept, you have to help the customer really adopt cloud services and evolve. And our customer success organization been pretty critical to that evolution over the last several years,” Althoff said.

“The fourth one seems like a means to an end honestly when we did it, but now I am wickedly grateful for the investments we made here because with the pandemic it has served us incredibly well. And that is to roll out what we call a digital sales force.

“So when you do these expensive things with your higher-end clients, the only way to offset that was to get a ‘digital sales engine’ up and running for connecting our digital marketing to our digital-sales resources; having a system feed qualified and intelligence-driven leads to our inside-sales teams; providing next-best actions; real-time sales coaching and objection-handling; and having all that use our own tech to feed the machine. That’s how we addressed the scale needs of the business.”

5. The ‘Reimagining the Partner Model’ Pillar.

“That meant getting partners’ IP to run on our platform that we would effectively then represent and sell as if it was our own by verticals,” Althoff said. “So we could get together with our healthcare ISVs and say, ‘Hey, listen, we’re not only going to help you put your product on our platform, we’re actually then going to turn and help you sell it, and measure our people’s success on that the same way as we do with how they sell our IP. And that has been hugely beneficial to us.”

Althoff said the reimagination and restructuring of the global sales org “has been hugely beneficial.” Here’s one way of trying to quantify that: two years ago, as Althoff’s reorg was just beginning to bear fruit in late December, Microsoft’s market cap was about $800 billion.