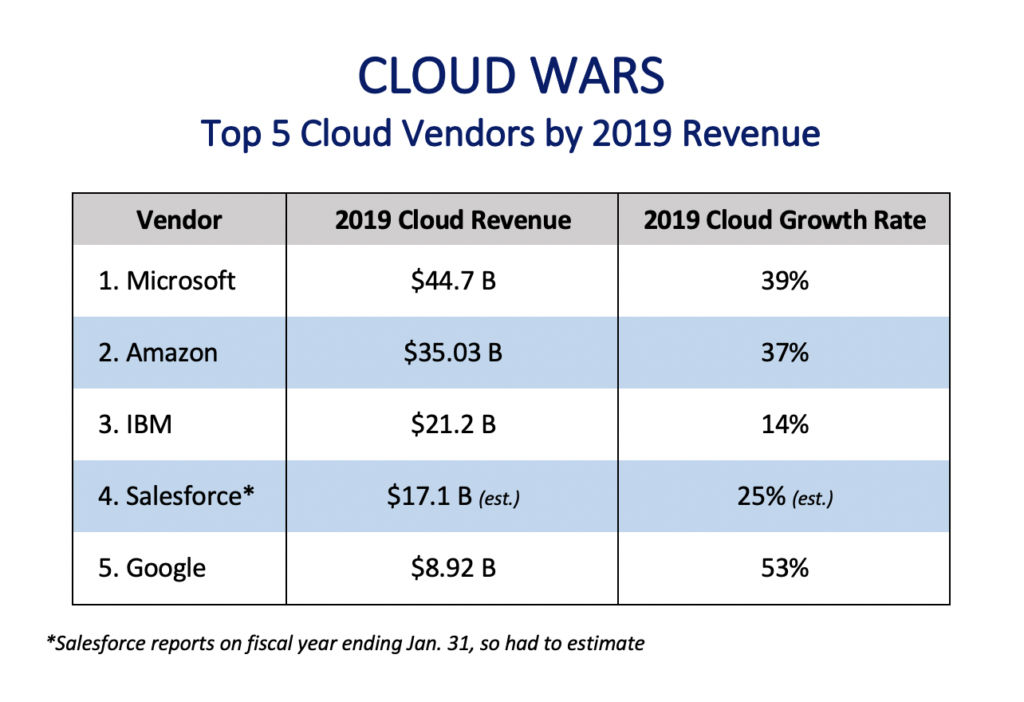 While revenue is just one of many measures we use in setting our weekly Cloud Wars Top 10, it’s fascinating to see that in terms of raw dollars, IBM grabs third place in a ranking of the top 5 vendors by 2019 cloud revenue.

IBM has been at #7 on the Cloud Wars Top 10 for several months. Its lack of growth, its fragmented or even confusing value proposition for business customers, and its obscurely one-of-a-kind way of pooling its cloud revenue from across the sprawling company have seen it drop from higher spots in the past.

Using the raw-revenue metric, Google Cloud, like IBM, moves up on this revenue-only list relative to its position on the Cloud Wars Top 10, which has Google Cloud at #6. (That might change now that parent company Alphabet has begun breaking out financial details for Google Cloud.)

It’s also intriguing to see the growth rates across these 5 companies with the largest cloud revenue for 2019:

With a combined calendar-2019 revenue of about $127 billion, these 5 companies have a very good chance to goose that total up to about $165 billion here in 2020.

Microsoft on its own has a shot at reaching $60 billion in cloud revenue in this calendar year (as opposed to in its fiscal 2020, which ends June 30). AWS is likely to top $45 billion for the same time period.

Think of that: just those two companies—Microsoft and Amazon—are almost certain to generate combined cloud revenue of more than $100 billion this year alone.

Anyone out there doubting that the enterprise cloud represents one of the greatest growth markets the world has ever seen?

Microsoft Cloud Revenue Blows Away Amazon’s by 30% for 2019

At the time of this writing, Google Cloud was among the numerous clients of Evans Strategic Communications LLC and Cloud Wars Media LLC.