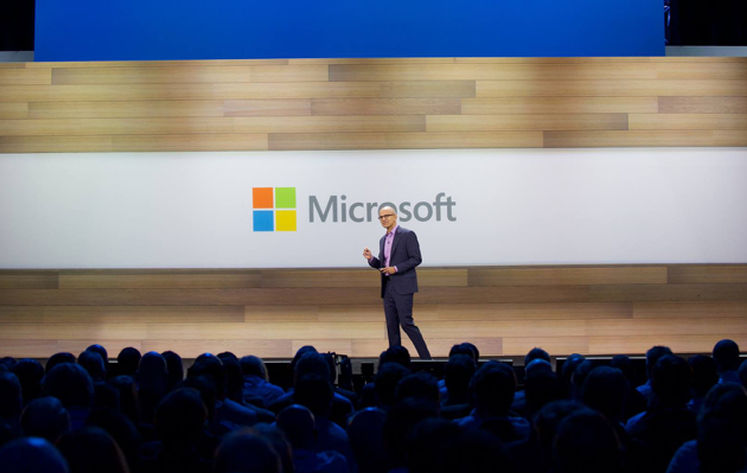 Microsoft is pulling away from Amazon on a new front in the Cloud Wars. The #1 cloud vendor in the world is doing so by forging strategic customer-centric alliances with other top cloud providers, notably SAP and Oracle and also earlier this week with high-flying ServiceNow.

To be sure, Amazon has long been a preferred infrastructure provider for Salesforce—the world’s largest SaaS vendor and #3 on my Cloud Wars Top 10 ranking—and also for SAP, which is #4 on my Top 10.

And late last year, Workday began allowing some customers to run its apps on AWS infrastructure. So clearly, AWS has been and continues to be a powerful presence as an IaaS partner for some of the world’s top SaaS vendors.

But what I’m talking about with Microsoft and its recent slew of what I very intentionally called “strategic customer-centric alliances” is something quite different from that first-generation model of SaaS running on IaaS.

What Microsoft is doing goes far beyond that SaaS-on-IaaS arrangement, which all on its own is an essential and powerful element in the new shift to digital business. But as the various layers of the cloud take on more mission-critical responsibilities within enterprises today, business customers are looking for more than simply running SaaS apps on public-cloud infrastructure, a process many have been carrying out for several years.

Microsoft is delivering on those broader and deeper plans in ways that align with what business customers want and need, rather than simply with the vendor-driven model of a SaaS vendor needing IaaS services to run its applications.

To underscore the relevance and extent of that different approach, let’s take a look at what Microsoft’s doing with SAP, with Oracle, and just this week with ServiceNow.

I’ve analyzed this powerful partnership extensively in earlier pieces because I believe the newly enhanced Microsoft-SAP relationship will reshape how many cloud vendors set about to engage with and deliver new capabilities to customers. (For more on that, please see SAP and Microsoft Revolutionize the Cloud Market and also Microsoft Begins Selling SAP Applications As Cloud Ecosystem Evolves.)

Sparked by an SAP initiative launched a few months ago to simplify customers’ engagements with SaaS vendors plus hyperscalers plus integrators, Microsoft aggressively endorsed the program and added some new elements of its own. (The SAP program also includes AWS and Google Cloud.)

Among those new elements was a plan conceived by Microsoft executive vice president Judson Althoff and approved by SAP: a segment of Microsoft’s global sales organization will collaborate so closely with SAP that those Microsoft reps can actually sell SAP cloud applications.

As a result of Microsoft’s whole-hearted endorsement of SAP’s “Embrace” program, SAP executives have said that among customers looking to move their mission-critical SAP workloads to the cloud, Microsoft Azure has been far and away the #1 choice.

For customers, it must be extremely comforting to know that two massive cloud partners like Microsoft and SAP are working so closely together that Microsoft is even selling SAP’s cloud apps. That level of seamless, customer-centered collaboration will soon become the norm in the cloud industry—because customers will demand it.

Microsoft Even Convinces Lone-Wolf Oracle to Become a Cloud Partner

In a recent piece called Oracle Hot Takes: Workday “Not Competitive,” SAP a Time Bomb, Microsoft Valued Partner, I offered this view of why Oracle executives believe the partnership in the cloud with Microsoft will be so beneficial for customers:

Speaking of Microsoft—formerly a bitter rival of Oracle’s but now a strategic partner in the cloud—Oracle CEO Safra Catz and chairman Larry Ellison spoke of the valued partnership the companies have established.

From Catz’s prepared remarks: “As our customers adopt our technologies, whether via licenses or cloud services, our overall customer base is growing and that growth is starting to accelerate. In addition, the recent interconnect agreement with Microsoft will only help accelerate the transition from on-premise database to the Autonomous Database service.” (Please see Microsoft-Oracle Shocker: Customers Win as #1 and #6 Vendors Pair Up.)

Ellison, during the Q&A session, expanded on that outlook.

“Most customers have Microsoft technology and Oracle technology. So they might have a Microsoft analytics suite and their data in an Oracle Database. We want to make it as easy as possible for you to run those Microsoft analytics in Azure, accessing the Oracle Database in the Oracle Public Cloud. And we’ve built these high- speed interfaces and we glue the technologies together, but we also have unified the customer experience.”

The Microsoft-Oracle “cloud interconnect” pact doesn’t mean the two companies won’t continue to compete relentlessly in many areas. It simply means that even as that takes place, the tens of thousands of business customers who want to use cloud services from both companies can do so more simply, more securely, and more productively.

And that, too, will become a model for the future.

This new alliance will, according to ServiceNow CEO John Donahoe as quoted in a press release, help businesses and government agencies “accelerate their digital transformation, create great experiences and unlock productivity.”

By tapping into Microsoft’s “leading enterprise technology and capabilities,” ServiceNow’s digital-workflow applications will help companies in regulated industries and government organizations to achieve things that were formerly impossible. (For more on that, please see ServiceNow’s Breakthrough Strategy: Create ‘Systems of Action’.)

Microsoft CEO Satya Nadella also emphasized the boost the partnership will give to strategic and essential digital-transformation efforts. Nadella said customers have “an enormous opportunity” to leverage the new partnership to “accelerate their digital transformation while meeting their security and compliance needs.”

Will Workday Be the Next Major Cloud Player to Pair Up with Microsoft?

This is pure speculation on my part, but I think it’s reasonable to think that Workday might also strike a broad partnership deal with Microsoft. Customer-centric initiatives have been indispensable to Workday since its founding 14 years ago.

And since its agreement late last year with AWS to allow Workday’s HR and Financials apps to run on AWS infrastructure, it is certainly conceivable that Workday might open up to Microsoft Azure and Google Cloud as well.

Beyond that, Workday’s long-held belief in openness and the primacy of customer success has been echoed loudly and incessantly by Microsoft’s Nadella—so the two companies are certainly of a like mind on many vital issues that a partnership could include. You can check out some of Workday’s thinking on those issues in this blog post from last year by CTO Joe Korngeibel titled “Openness at Workday.”

Disclosure: at the time of this writing, SAP, Oracle, Google Cloud and Workday were clients of Evans Strategic Communications LLC.