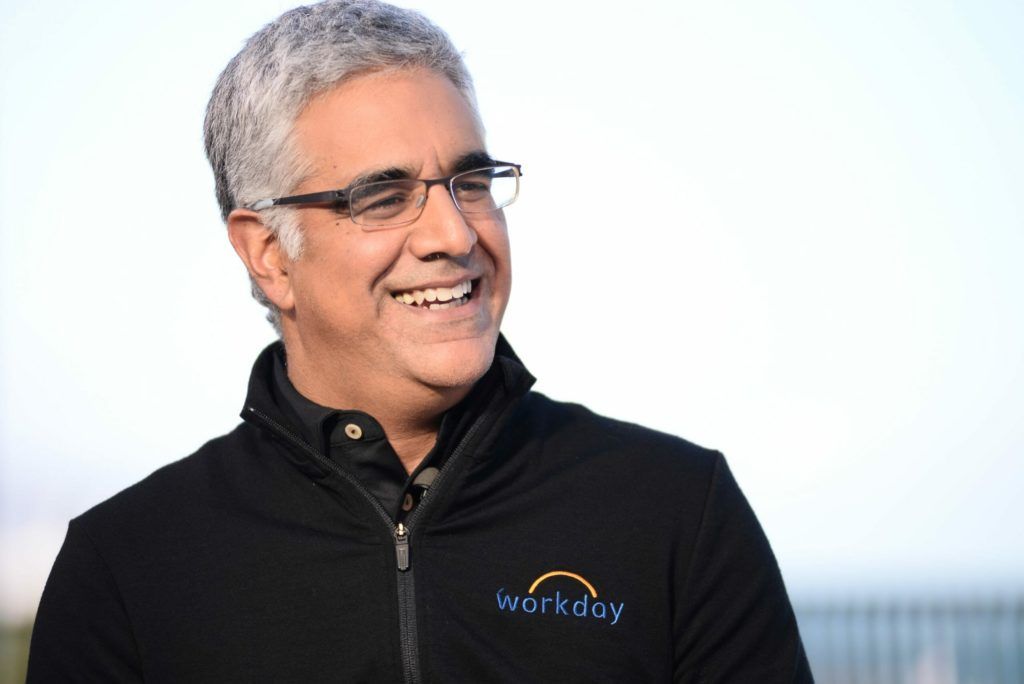 As Workday continues to thrive against much-larger competitors, CEO Aneel Bhusri has been hammering home his belief that Oracle and SAP simply cannot match Workday’s ability to drive high levels of success for the world’s largest corporations.

Workday releases its fiscal Q1 earnings later today. And I think it’s highly likely that Bhusri will once again use the earnings call to make his case that when it comes to increasingly strategic HCM purchases by the Fortune 100, size simply doesn’t matter.

Workday’s current annualized cloud-revenue run rate is about $4 billion. SAP’s is about $8.5 billion, and Oracle’s is probably around $7.5 billion. But in spite of both competitors being twice as large as Workday in the cloud—and SAP being 7x bigger overall and Oracle 10x overall—Workday is locking up many of the world’s largest HCM accounts.

Here’s an excerpt from my analysis 3 months ago, called Workday CEO Hammers Oracle and SAP over Shortcomings in Fortune 500:

In the Q&A portion of the Feb. 27 earnings call, Credit Suisse analyst Brad Zelnick asked Bhusri this question: “While we’re all very familiar with your success replacing legacy HR systems, we recently picked up a couple of significant Oracle HCM cloud displacements that stood out to us just because this is their current-generation product. Can you give us a sense of how prevalent these conversions are, and what might be in common when you come across them?”

Bhusri’s answer reflected other comments he’s made about the inability of Oracle and SAP to deliver fully satisfactory go-lives for customers. And the math is very clear: if Workday has 45% or almost half of the Fortune 500 for HCM, then its share is almost twice that of either of its primary and much-larger competitors.

“I’m not going to comment on how prevalent they are—I’d just say that as it relates to all of our legacy competitors, they were slow to move to the cloud,” Bhusri said.

If that is in fact what’s been happening, then this represents a massive victory for Workday and its ability to significantly differentiate itself from competitors in ways that customers value most highly. That’s a point Bhusri made at the very top of his opening remarks on the call when he said Workday’s success is the result of the outstanding work of its employees and also “our forward-thinking customers who expect more from their enterprise applications and who continue to choose Workday as their partner for their finance and HR cloud transformations.”

Bhusri was equally blunt in September of last year when he used his fiscal Q2  earnings call to outline what he sees as Workday’s superior capabilities and competitive differentiation. Here’s an excerpt from my analysis of that call, headlined Workday CEO: Oracle and SAP Can’t Match Us in Fortune 100:

“And when people have a failed project, they wanted to get the sure thing and make sure that it works. And that’s where we hopefully come into play.”

Of course, SAP and Oracle would beg to differ. However, neither of those proud companies has been able to refute Bhusri’s figures about Workday’s domination among the Fortune 100 and Fortune 500. Nor have they been able to produce their own showcase list of multiple HCM wins among the world’s biggest companies.

Oracle’s Larry Ellison is hoping that his company’s fast-growing Cloud ERP business will pull along some Cloud HCM wins, a dynamic that Ellison recently said is gaining favor among big companies.

More compelling were Ellison’s comments in his opening remarks regarding his company’s progress and competitive positioning versus Workday’s flagship HCM product line. If, as Ellison claims, business customers are beginning to bundle the purchases of ERP and HCM from a single vendor, that could have huge implications across the SaaS business.

“HCM increasingly is being purchased as a part of an ERP cloud application suite. As a result, Oracle now has more HCM customers than Workday, and Fusion HCM revenue is growing faster than Workday.”

While I don’t have the latest 1:1 comparative figures that Ellison alluded to but did not supply, some details indicate that for at least the short term, Ellison is completely correct in saying that Oracle’s Fusion HCM business is growing more rapidly than Workday’s HCM business. For Oracle’s quarter ended Feb. 29, it said its Fusion HCM revenue grew 27%. That’s significantly higher than the “high teens” guidance for Workday HCM Bhusri offered for Workday’s fiscal 2021, which will end Jan. 31, 2021.

Each of the cloud leaders offers very a different perspective on what’s actually going on in the enterprise-software world. But one indisputable objective truth is that business customers have never had it so good—the ferocious competition means they’re seeing stellar products at attractive prices.

So in this afternoon’s Workday earnings call, I’m betting Aneel Bhusri will make some very pointed comments about Workday’s ability to “not just win the customer, but more importantly get them into production and have them be happy.”

Workday CEO Hammers Oracle and SAP over Shortcomings in Fortune 500

Disclosure: at the time of this writing, Workday, Oracle and SAP were each among the many clients of Cloud Wars Media LLC and/or Evans Strategic Communications LLC.