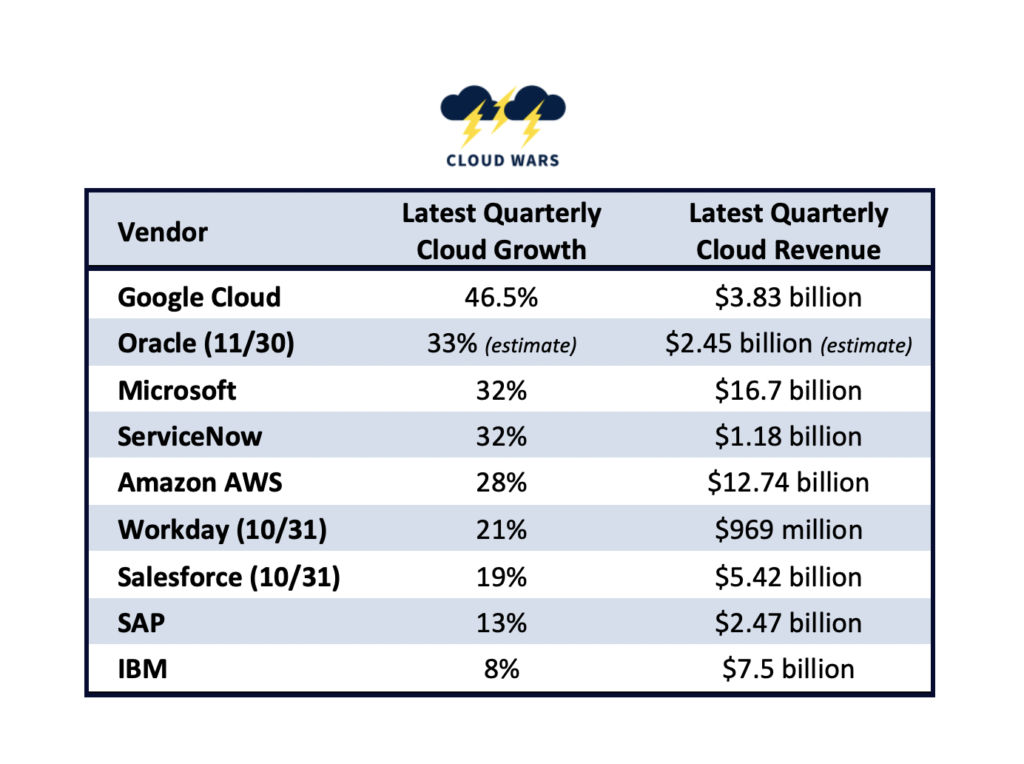 The world’s 5 fastest-growing major cloud vendors posted Q4 growth rates spanning 46% to 28% and generated a total of about $37 billion in Q4 cloud revenue.

As shown in the below table, Google Cloud boosted cloud revenue a blistering 46.5% in Q4 and expanded its cloud business far more rapidly than any other cloud provider.

And that’s not because the others were slacking:

These one-time growth-rate placements aside, here’s where each of those 5 high-achievers sits on my weekly Cloud Wars Top 10 rankings: Microsoft is #1, Amazon is #2, Google is #3, Oracle is #6 and ServiceNow is #7.

What’s in a growth rate?

Some readers have asked recently why I devote significant amount of time and attention to growth rates. It’s a fair question, and here’s my rationale.

As I’ve said before, I don’t think the world has ever seen a growth market like what we’ve witnessed over the past few years in the Cloud Wars.

And its impact is simply staggering: sustained and accelerating growth that has created many hundreds of billions of dollars of wealth spread across a huge number of people; global impact across every industry; ramifications for every single person on Earth as cloud technology impacts how we live, work, play, learn and dream; and a leveling effect that accelerates entrepreneurship by putting into the hands of even tiny companies computing power and AI solutions and ML tools and innovation cycles that in the past were available only to the largest corporations on Earth.

Putting these numbers into context

Speaking of the largest companies on Earth: in calendar 2021, there’s an excellent chance that Microsoft’s cloud business—not the entire company, but merely its cloud business—will do more than $70 billion in revenue.

If we have witnessed anything comparable to the growth market of the enterprise cloud, please enlighten me—because I’ve certainly never seen anything like it.

The future is bright

The reason I feel so fortunate to be able to chronicle the Cloud Wars is that this business doesn’t just represent a lot of fuzzy numbers whizzing up and down on screens, or some risk-based arbitrage that drags big numbers along with it but in fact touches the lives of only a very few.

No, the Cloud Wars and their ramifications are real, and they’re personal: from the rise of virtual life and virtual business over the past 11 months to transformed business models in every industry to the extraordinary achievement of developing and releasing a vaccine in less than a single year, versus the old standard of a single decade.

The cloud and its 10 biggest and most-influential providers have been engines of job creation and innovation even as they’ve also raised the quality of life for billions of people around the world.

They have been a source of relentless optimism and opportunity.

And I believe that we have only barely scratched the surface of what’s possible.