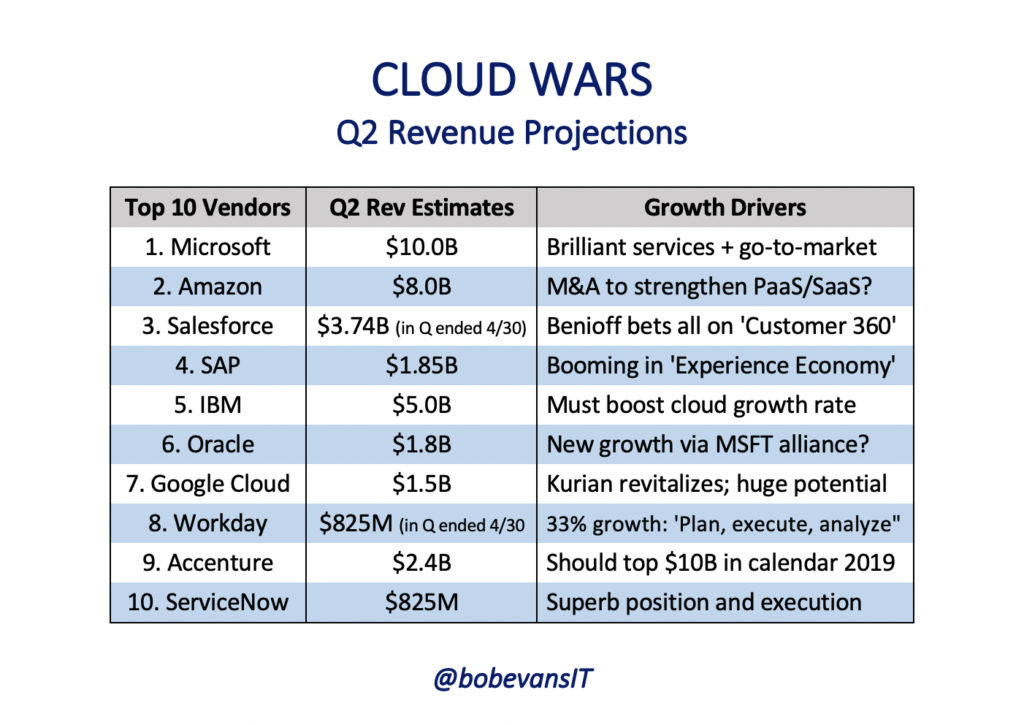 Continuing to fuel the dynamic transformation of the global economy, the Cloud Wars Top 10 vendors will post cloud revenue totaling $36 billion in Q2.

I’m projecting Microsoft will post the lion’s share of that with about $10 billion in cloud revenue for the three months ending June 30. Still, most of the Cloud Wars Top 10 tech companies will continue to post growth rates of 30% or more.

As the above chart indicates, the five highest-rated cloud vendors—Microsoft, Amazon, Salesforce, SAP and IBM—are likely to report cloud revenue of about $28 billion in the quarter.

For all those in the media and the analyst community who continue for some reason to insist that Amazon is the “runaway” leader in the cloud, please note that it’s very likely that #1 Microsoft will post cloud Q2 cloud revenue that is 25% higher than Amazon’s.

As I’ve said repeatedly in the past, that’s not meant to be a knock on Amazon in any way—quite the contrary, because the company’s AWS cloud unit has performed brilliantly.

But Microsoft’s performance has simply been better, more broadly based, and more closely aligned with the needs of customers across all industries and across the globe as well (please check out Why Microsoft Is #1 in the Cloud: 10 Ways It’s Getting Bigger, Stronger, Better). Here are a few reasons for that:

On top of those leading moves by Microsoft, here are a few other notable developments to watch for over the next few weeks as Q2 draws to a close and we begin seeing formal earnings results in mid-July.

Salesforce racked up $3.74 billion in revenue for the quarter ended April 30 and expects to top $13 billion for its fiscal year ending January 31, 2020. It’s putting everything into its new “Customer 360” initiative, including some new services aimed not at customers but at the employees who serve those customers.

Can SAP Remain in Hypergrowth?

After posting revenue growth of 48% for its cloud business last quarter, SAP has said that in 2023, cloud revenue will account for half of its total revenue. That would equate to about $20 billion of its projected total 2023 revenue of about $40 billion.

Just How Big Is Google Cloud?

So far, parent company Alphabet has declined to break out revenue results for Google Cloud, and has not even offered growth rates. But without providing any details, the company has lavished praise on the growth trajectory, strategic significance, and vast potential of its cloud business under new CEO Thomas Kurian. Kurian has instilled a sense of focus, urgency and customer-centric thinking that have all been essential for Google Cloud.

Workday and ServiceNow on Fast Track to $4 Billion

While these two SaaS superstars are the smallest tech vendors in the Cloud Wars Top 10, it’s important to keep that “smallest” label in context. Both companies have at least a decent shot of posting a $1-billion quarter sometime in calendar 2019, and will surely blow past $4 billion in annual revenue in calendar 2020.

Disclosure: at the time of this writing, Microsoft, SAP, IBM, and Oracle were clients of Evans Strategic Communications LLC.