In addition, relative to Amazon Aurora for mixed workloads, the improved HeatWave query accelerator delivers 42X better price-performance along with 18X lower latency and 110X higher throughput at a price that is only 42% of that for the AWS solution. The enhancements come as enterprises in every industry are hungry for faster and more-powerful data-management tools that allow those organizations to manage, analyze, and act on data more rapidly and at lower cost.

This infographic from Oracle spells out some of the major customer benefits offered by the new and improved MySQL HeatWave query accelerator: Driving that superior performance are a range of enhancements outlined by Nipun Agarwal, Oracle vice-president of MySQL HeatWave and advanced development:

I was also intrigued by the list of product enhancements that Oracle said its customers have been requesting. Those included:

“We were able to address all of those customer requests in this new release,” Agarwal said during a Zoom call shortly before the launch. (Oracle is making the benchmarking code publicly available, enabling customers to run the benchmarks themselves by visiting here.)

“Our customers have also been very pleased with their ability to run their applications with MySQL HeatWave without any changes to their applications. And with these new advances such as AutoPilot and scale-out data management, we’ve given our customers the ability to spend less time doing manual chores that can be automated, and more time exploring their data to make better business decisions.”

For example, scale-out data management allows users to bypass the traditional way of reloading data into HeatWave, a process that was expensive. With the new HeatWave capabilities, Agarwal said, data is first partitioned and placed in an object store using an encrypted, in-memory format; the data can then be reloaded in parallel at object-store bandwidth; and users have the ability to load the data with very fine and precise granularity, with all changes to MySQL being propagated to the object store.

For a 10TB workload, the performance improves from 7.5 hours down to 4 minutes in one of the larger OCI regions

With MySQL AutoPilot, Oracle says it is the only vendor offering a MySQL service with machine learning-based automation, and Agarwal emphasized that this unique ML-driven automation is deployed across all phases of HeatWave’s operation. That is consistent with chairman Larry Ellison’s vision of rapidly expanding autonomous or “self-driving” services that will eventually result in an entire Autonomous Oracle Cloud.

Security is also a major focus with HeatWave’s new enhancements, and Agarwal said data is now encrypted at all times—at rest and in flight—with zero degradation of performance.

Even with all of these significant enhancements in place, Agarwal said, Oracle MySQL Database Service with HeatWave is much less expensive than Amazon Redshift and Amazon Aurora while also offering dramatically greater performance and speed. All these new features including MySQL AutoPilot and HeatWave scale-out data management are available to HeatWave customers at no additional charge.

That expanding differentiation is grabbing the attention of customers, as these 4 examples provided by Oracle illustrate:

As the two graphics below illustrate, Oracle MySQL Database Service with HeatWave is a whopping 6.8X faster than the latest Amazon Redshift AQUA service while still managing to be half the cost; and when compared to Amazon Aurora for mixed workloads, MySQL HeatWave is less than half the cost while offering lower latency and better throughput. 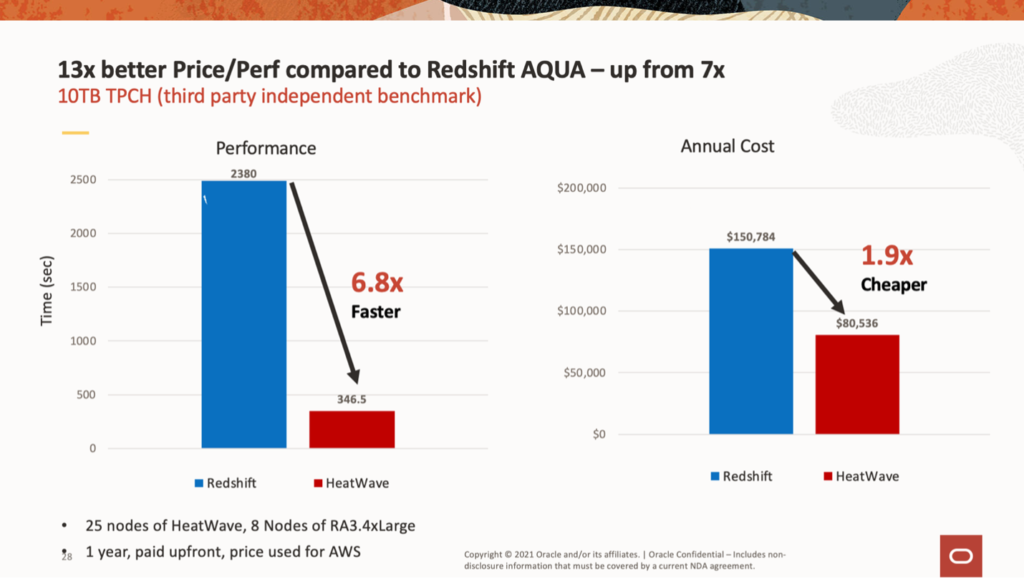 On top of those technological advances for MySQL HeatWave, Oracle has also made a significant change to its go-to-market plans for the product. While it was previously offered by only a small subset of Oracle’s cloud sales organization, MySQL HeatWave is now being offered by the entire Oracle tech cloud sales team, which is likely to give it much greater visibility in the market and ultimately greater presence among customers.

“Clearly, with today’s news, the HeatWave thawed the Snowflake and proved that Amazon’s ‘Advanced Query Accelerator’ didn’t do quite enough acceleration,” Oracle said in a comment for this article.

While we expect Oracle to regularly make groundbreaking announcements around its core database and more recently its Autonomous franchise, these last two announcements around MySQL have been somewhat of a surprise. Oracle is clearly making a significant R&D investment in this area and sending a message to its competitors in the open-source cloud database market that the company is serious and intends to remain in the lead. These latest innovations, backed by more than 50 patents and culminating in MySQL AutoPilot, take the market in a different direction—one that is in Oracle’s wheelhouse—to in-memory and automation. This could be the start of an industry revolution in open-source databases.

This article is brought to you by Oracle.