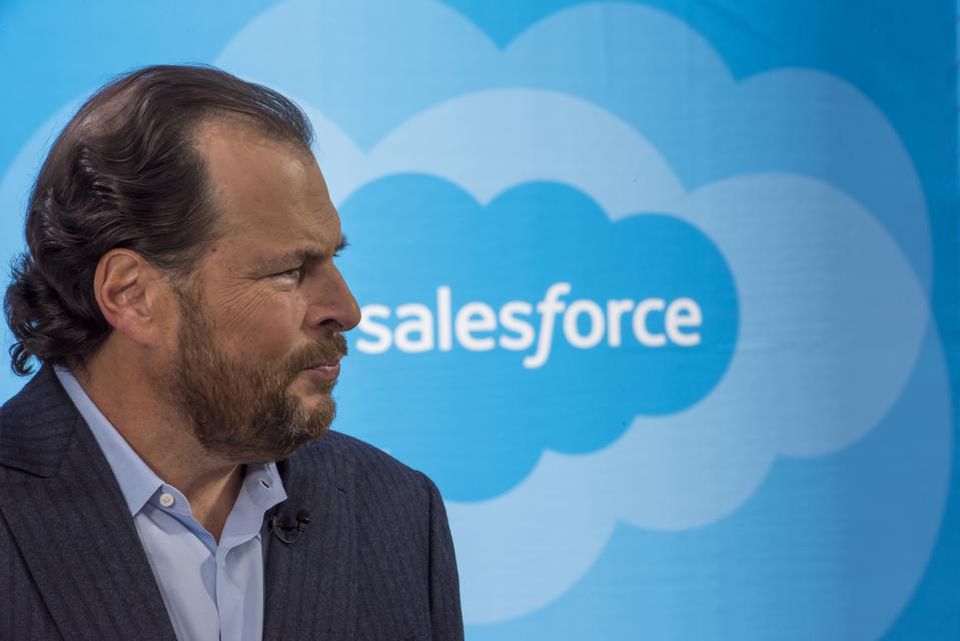 Pushing Salesforce to achieve things no other software company ever has, Salesforce CEO Marc Benioff has proclaimed his company’s got SAP in its sights and will soon overtake it as the world’s #1 provider of enterprise applications.

“We’re about to pass SAP as the largest enterprise-applications company in the world,” Benioff said in his long and wide-ranging opening remarks to the financial-analyst community.

“I know you all track SAP and Salesforce and we don’t really talk so much about SAP since they mostly exited the CRM market so many years ago.

“It’s awesome to see not just be No. 1 in CRM, but yes, we’re going to be the #1 enterprise software applications company in the world by passing SAP,” Benioff said.

“This is a moment, and we can see that it’s imminent. With our pending acquisition of Slack, we’ve never been better positioned for the future that will be an all-digital, all work-from-anywhere world.”

Now of course mere talk is often cheap. But in the case of Benioff and Salesforce, he has always delivered on promises and predictions that, at the time he made them, might have seemed to some to be preposterous. My favorite indicator of the unique track record that Benioff has generated is shown in this table from its investors-day conference a couple of years ago: the only public company in history to grow 20% per year for its first 20 years. 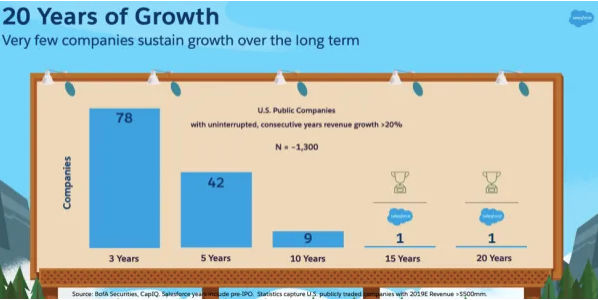 I suspect that Benioff would have put the bullseye on SAP at some point even had Salesforce not announced 6 months ago its intention to acquire Slack for $27.7 billion. But with that proposed acquisition making its way through the regulatory-approval process, Benioff appears to believe Salesforce’s ascent to #1 is inevitable. (For more of my reaction to Salesforce’s recent earnings call, check out today’s Cloud Wars Minute video update.)

“Once this merger is approved, we’re going to be able to build Slack into all of our products—they’ll all become Slack-first and that’s going to make our customers more productive,” Benioff said.

So, without question, there’s great momentum on the Salesforce side with not just the impending addition of Slack but also its market-leading status in what I believe is the hottest segment of the cloud market today: industry clouds.

Since announcing my Industry Cloud Top 10 about 3 months ago, Salesforce has been #1 on the basis of these 3 characteristics (and you can see my more-detailed analysis at 10 Reasons Salesforce Expects to Rule Booming Industry-Cloud Market):

But SAP didn’t become the world leader in enterprise applications by being a wallflower. Over the years, it has shown an admirable ability to adapt to changing times while also pulling its massive customer base forward. For the latest example of that, please see SAP Goes FinTech with Bold New Approach to Industry Cloud.

Those customers include most of the world’s largest corporations as well as a fast-growing number of mid-sized and small companies in the cloud, and SAP is intent on reigniting its cloud-revenue growth rate back above 20%.

If it does that, the battle for supremacy in enterprise apps between not just SAP and Salesforce but also Oracle and Microsoft will be fiercely contested for years to come.

And we can say with 100% certainty that the biggest winner in that battle will be the business customers who will benefit enormously from the nonstop innovations that competition will generate.